Signs and symptoms of Parkinson's disease

Signs and symptoms of Parkinson's disease 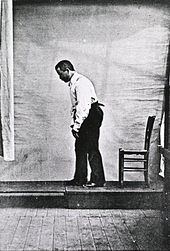 Side view.
Woman suffering from paralysis agitans showing a characteristic type of extension. Photos were taken in 1889 and appeared in Nouvelle Iconographie de la Salpètrière, vol. 2.

Four motor symptoms are considered cardinal in PD: tremor, rigidity, slowness of movement, and postural instability.[1] Other motor symptoms include gait and posture disturbances such as decreased arm swing, a forward-flexed posture and the use of small steps when walking; speech and swallowing disturbances; and other symptoms such as a mask-like face expression or small handwriting are examples of the range of common motor problems that can appear.[1]

... immobile patients who become excited may be able to make quick movements such as catching a ball (or may be able to suddenly run if someone screams "fire"). This phenomenon (kinesia paradoxica) suggests that patients with PD have intact motor programmes but have difficulties accessing them without an external trigger, such as a loud noise, marching music or a visual cue requiring them to step over an obstacle.[1]

Example of writing by a patient with Parkinson's disease; possibly showing micrographia in addition to other abnormal characteristics. Published by Jean-Martin Charcot in 1879. Text accompanying image stated "The strokes forming the letters are very irregular and sinuous, whilst the irregularities and sinuosities are of a very limited width. On a careful examination of this specimen of writing it will be perceived that the down-strokes are all, with the exception of the first letter, made with comparative firmness and are, in fact, nearly normal — the finer up-strokes, on the contrary, are all tremulous in appearance, and it is to the unsteadiness of these lines that the peculiar character of the writing here is principally due."

Other motor symptoms include:

Parkinson's disease causes neuropsychiatric disturbances, which include mainly cognition, mood and behavior problems and can be as disabling as motor symptoms.[1]

Cognitive disturbances occur even in the initial stages of the disease in some cases.[9] A very high proportion of sufferers will have mild cognitive impairment as the disease advances.[1] Most common deficits in non-demented patients are:

Deficits tend to aggravate with time, developing in many cases into dementia. A person with PD has a sixfold increased risk of suffering it,[1] and the overall rate in people with the disease is around 30%.[9] Moreover, prevalence of dementia increases in relation to disease duration, going up to 80%.[9] Dementia has been associated with a reduced quality of life in disease sufferers and caregivers, increased mortality and a higher probability of attending a nursing home.[9]

Cognitive problems and dementia are usually accompanied by behavior and mood alterations, although these kind of changes are also more common in those patients without cognitive impairment than in the general population. Most frequent mood difficulties include:[1]

Obsessive–compulsive behaviors such as craving, binge eating, hypersexuality, pathological gambling, or other, can also appear in PD, and have been related to a dopamine dysregulation syndrome associated with the medications for the disease.[1]

Psychotic symptoms are common in PD, generally associated with dopamine therapy. Symptoms of psychosis, or impaired reality testing, are either hallucinations, typically visual, less commonly auditory, and rarely in other domains including tactile, gustatory or olafactory, or delusions, that is, irrational beliefs. Hallucinations are generally stereotyped and without emotional content. Initially patients usually have insight so that the hallucinations are benign in terms of their immediate impact but have poor prognostic implications, with increased risk of dementia, worsened psychotic symptoms and mortality. Delusions occur in about 5-10% of treated patients, and are considerably more disruptive, being paranoid in nature, of spousal infidelity or family abandonment. Psychosis is an independent risk factor for nursing home placement.[16]

Hallucinations can occur in Parkinsonian syndromes for a variety of reasons. There is an overlap between Parkinson's disease and Lewy body dementia, so that where Lewy bodies are present in the visual cortex, hallucinations may result. Hallucinations can also be brought about by excessive dopaminergic stimulation. Most hallucinations are visual in nature, often formed as familiar people or animals, and are generally non-threatening in nature. Some patients find them comforting; however their carers often find this part of the disease most disturbing and the occurrence of hallucinations is a major risk factor for hospitalisation. Treatment options consist of modifying the dosage of dopaminergic drugs taken each day, adding an antipsychotic drug like quetiapine, or offering carers a psychosocial intervention to help them cope with the hallucinations. 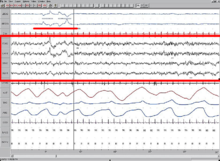 Sleep problems can be worsened by medications for PD, but they are a core feature of the disease.[1] Some common symptoms are:

Parkinson' disease causes constipation and gastric dysmotility that is severe enough to endanger comfort and even health.[18] A factor in this is the appearance of Lewy bodies and Lewy neurites even before these affect the functioning of the substantia nigra in the neurons in the enteric nervous system that control gut functions.[19]

PD is related to different ophthalmological abnormalities produced by the neurological changes.[1][20] Among them are: