The Ministry of Public Security of Poland (Polish: Ministerstwo Bezpieczeństwa Publicznego or MBP) was a Polish communist secret police, intelligence and counter-espionage service operating from 1945 to 1954 under Jakub Berman of the Politburo. Its main goal was the eradication of the anti-communist structures and socio-political base of the underground Polish Secret State as well as the persecution of soldiers of the Polish Home Army (Armia Krajowa) and Freedom and Independence (WiN) active during World War II. In that capacity, MPB remained known mainly through its own regional offices called Urząd Bezpieczeństwa Publicznego or UBP (Office of Public Security, official name); and Urząd Bezpieczeństwa or UB (Office, or Department of Security).[1] 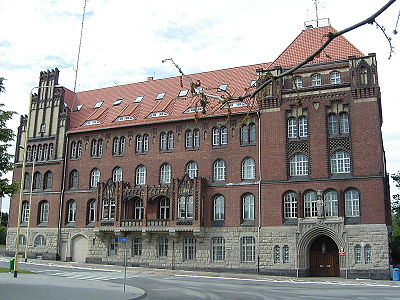 Formation of the communist state security 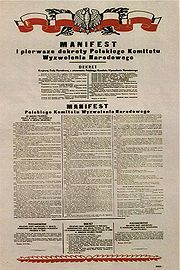 In July 1944, behind the Soviet front line, a brand new Polish provisional government was formed, called the Polish Committee of National Liberation (Polski Komitet Wyzwolenia Narodowego) or PKWN.[2] It was established in Chełm on the initiative of Polish communists, in order to assume control over Polish territories re-taken from Nazi Germany by the advancing Red Army. PKWN was proclaimed "the only legitimate Polish government" by Stalin, with full political control and Soviet sponsorship. Within the PKWN's internal structure, there were thirteen departments called Resorty. One of these was the Department of Public Security (Resort Bezpieczeństwa Publicznego) or RBP, headed by Stanisław Radkiewicz. It was a precursor of the Polish communist secret police.

On December 31, 1944, the PKWN was joined by several members of the London-based Polish government in exile, among them Stanisław Mikołajczyk (later chased out of the country). PKWN was then transformed into Provisional Government of Republic of Poland (Polish: Rząd Tymczasowy Rzeczypospolitej Polskiej or RTRP). All departments were renamed: the Department of Public Security became the Ministry of Public Security (Ministerstwo Bezpieczeństwa Publicznego) or MBP.

From the end of 1940s to 1954, the Ministry of Public Security – operating alongside the Ministry of Defence – was one of the largest and most powerful institutions in post-war People's Republic of Poland. It was responsible for internal and foreign intelligence, counter-intelligence, monitoring anti-state activity in Poland and abroad, monitoring government and civilian communications (wiretapping), supervision of the local governments, maintaining a militsiya, maintaining prisons, fire services, rescue services, and border patrol; as well as several concentration camps set up by the NKVD (such as Zgoda labour camp). In July 1947, the MBP absorbed Section II of General Staff of the Polish People's Army (the Polish Military Intelligence). Military and civilian intelligence merged to become Department VII of Ministry of Public Security.

The political and administrative matters of the Ministry came under the authority of Jakub Berman, a hardline Stalinist from the Polish United Workers' Party. The Ministry of Public Security structure was being changed constantly from January 1945 on, as the Ministry expanded. It was divided into departments and each department was subdivided into sections entrusted with different tasks. In January 1945, the largest and the most important department in MBP was Department One, responsible for counter-espionage and anti-state activities. It was headed by General Roman Romkowski born Natan Grinszpan-Kikiel in Moscow. Department I was divided into Sections, each responsible for a different but specific function self-described in the following way:

In June 1948 the Secret Office was established for Internal counter-intelligence. The Special Office conducted surveillance on members of the MPB itself. On March 2, 1949, the Special Bureau was established, renamed in 1951 simply as Department Ten. Department 10 conducted surveillance of high ranking members of the Polish United Workers' Party and people associated with them.

MBP in the field

Political penetration and military control over the country by the Union of Soviet Socialist Republics was easily visible in the People's Republic of Poland. The Soviet Northern Group of Forces stationed there until 1956. The command and administrative structure of the Polish Armed Forces, Intelligence, Counter-intelligence, special services and Internal security organs both civilian (MBP) and military (Main Directorate of Information of the Polish Army GZI WP) were infiltrated by the Soviet intelligence and counter-intelligence officers, who served as the main guarantee of the pro-Soviet policy of the new Polish socialist state. The Red Army provided assistance to MPB not only in the form of advisors, but also with their own paramilitary units including NKGB, NKVD, GRU, SMERSH; and, in later years MGB, MVD and KGB.

The first Russian chief advisor to the MPB was Major General Ivan Serov, a well-trained Stalinist experienced with Soviet security organs. Serov became commander of the NKVD-run militsiya during World War II. He worked as chief of the NKVD Secret Political Department, before becoming People's Commissar of Internal Affairs of the Ukrainian Soviet Socialist Republic. In 1941–1945, he was the First Deputy People's Commissar of the State Security and later – Deputy People's Commissar of Internal Affairs of the USSR. Once he became main advisor to the MBP in March 1945, Ivan Serov oversaw the kidnapping of 16 Polish top politicians and underground resistance leaders, secretly transported to Moscow, tortured and thrown into jail after a staged Trial of the Sixteen. None survived.[4][5]

The Stalinist rein of terror

Infiltrated by NKGB and NKVD agents – the Ministry of Public Security was well-known for its criminal nature. From January 1945 (or, July 22nd), the surviving members of the Home Army laid down their arms, granted an official amnesty (lasting till October 15th). Most were arrested by MBP on the spot, tortured and tried for treason.[6] The MBP carried out brutal pacification of civilians, mass arrests (see: Augustów roundup), as well as makeshift executions (see: Mokotów Prison murder, Public execution in Dębica) and secret assassinations.[7] According to deposition by Józef Światło and other communist sources, in 1945 alone the number of members of the Polish Underground State deported to Siberia and various labor camps in the Soviet Union reached 50,000.[8]

Overall, in the years 1944–1956 around 300,000 Polish citizens had been arrested, of whom many thousands were sentenced to long-term imprisonment. There were 6,000 death sentences pronounced, the majority of them carried out "in the majesty of the law". A special disciplinary legislation had been introduced, which allowed for the sentencing of civil persons before military tribunals including young people and children.[9] The courts were concerned with the alleged crimes, not the age and the maturity of its victims. For many years, the public prosecutors and judges as well as functionaries of the Ministry of Public Security, Służba Bezpieczeństwa and Główny Zarząd Informacji Wojska Polskiego engaged in acts recognized by international law as crimes against humanity and crimes against peace. The so called "Cursed soldiers" of the anti-communist resistance, who opposed the new occupiers and attacked the Stalinist strongholds, were eventually hunted down by MBP security services and assassination squads.[6] The underground structures had been destroyed, and most members of the Armia Krajowa and WiN who remained opposed to communism,[7][10] were executed after kangaroo trials (staged by Wolińska-Brus and Zarakowski among others), or deported to the Soviet GULAG system.[11]

The two officials traveled to Berlin and spoke with Mielke. On December 5, 1953, the day after meeting Mielke, Światło defected to the United States through their military mission in West Berlin. The next day, American military authorities transported Światło to Frankfurt and by December, Światło had been flown to Washington D.C, where he underwent an extensive debriefing.

Światło's defection was widely publicized in the United States and Europe by the American authorities, as well as in Poland via Radio Free Europe, embarrassing the authorities in Warsaw. Światło had intimate knowledge of the internal politics of the Polish government, especially the activities of the various secret services. Over the course of the following months, American newspapers and Radio Free Europe reported extensively on political repression in Poland based on Światło revelations, including the torture of prisoners under interrogation and politically motivated executions. Światło also detailed struggles inside the Polish United Workers' Party.

Among other activities, Światło had been ordered to falsify evidence that was used to incriminate Władysław Gomułka, who he personally arrested. He had also arrested and falsified evidence against Marian Spychalski, the future Minister of National Defence, who was at the time a leading politician and high ranking military officer.

The highly publicized defection of Colonel Światło, not to mention the general hatred of the Ministry of Public Security among Polish public led to changes in late 1954. In December of that year, the Polish Council of State and the Council of Ministers decided to replace the ministry with two separate administrations: the Committee for Public Security (Komitet do Spraw Bezpieczeństwa Publicznego or KDSBP), headed by Władysław Dworakowski, and the Ministry of Internal Affairs (Ministerstwo Spraw Wewnętrznych or MSW), headed by Władysław Wicha. The number of employees of the Committee for Public Security was cut by 30% in central headquarters and by 40–50% in local structures. The huge network of secret informers was also substantially reduced and the most implicated functionaries of the Ministry of Public Security were arrested. Surveillance and repressive activities were reduced; in the majority of factories, special cells of public security, set up to spy on workers, were secretly closed.

The Committee for Public Security took responsibility for intelligence and counter-espionage, government security and the secret police. From September 3, 1955 to November 28, 1956 it also controlled the Polish Army's Main Directorate of Information (Główny Zarząd Informacji Wojska), which ran the Military Police and counter espionage service. The Ministry of Internal Affairs was responsible for the supervision of local governments, the Milicja Obywatelska police force, correctional facilities, fire and rescue forces, and the border guard. In 1956 the Committee was dissolved, most of its functions merged into Ministry of Internal Affairs; the secret police was renamed to the 'Security Service' (Służba Bezpieczeństwa).

Soviet chief advisors to the Ministry of Public Security [12]

Notable people killed by the MBP

In Warsaw, most of the killings were done at the Mokotów Prison. The victims' dead bodies – often undressed and placed in empty cement bags – were wheeled out at night and buried in unmarked digs in the vicinity of different Warsaw cemeteries and in open fields.[13]