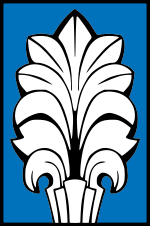 A collar patch of the Milicja

Actor as the militiaman's in movie "Black Thursday".

Milicja Obywatelska (Polish pronunciation: [miˈlit͡sja ɔbɨvaˈtɛlska]; Citizens' Militia or Civic Militia) was a state police institution in the People's Republic of Poland. It was created in 1944 by Soviet-sponsored PKWN, effectively replacing the pre-war police force. In 1990 it was transformed back into Policja.

The term milicja had been adapted from the cognate term, "militsiya," used in several communist countries. The term is derived from ‘militia’, which in turn claims its etymology from the concept of a military force composed of ordinary citizens. Contrary to implied meaning, in most cases it represented rather a state-controlled force, used to exert political repression on the citizens.

Under both communist and post communist governments, the Polish police system has traditionally operated under the auspices of national authority. Starting at the end of World War II, Poland, although never fully occupied by the Soviet Union, fell under the spell of its eastern neighbor, especially in 1948 when the country's turn toward Stalinism brought the beginning of totalitarian rule.

Poland formed the Polish Citizen's Militia, a kind of police force, at the end of 1944, while Poland was still in a theater of war, but just before Europe became divided. The citizen's militia would remain the predominant means of policing in Poland until 1990. The highly centralized nature of the militia and its lack of any great power placed it largely under the control of the Security Bureau, which used it to instill fear in the local populace.The training offered at Legionowo was conducted in a barracks-style setting in buildings from the communist era. The training is conducted in the military style but without the U.S. practice of physical fitness in the morning, as Polish police officers are expected to maintain their physical fitness on their own. Some of the classes were on the cutting edge, such as their indoor firearms training.It was divided into a Public order and Traffic Militia (Highway Patrol), Criminal Investigations (major crimes, forensics), Investigations Milicja and a Infrastructure Security section (security of important buildings, installations, etc.). There were regional, district, city and local detachments of the force.