The Reising was an American submachine gun manufactured by Harrington & Richardson. It was designed and patented by Eugene Reising in 1940. The two primary versions of the weapon produced during World War II were the M50 and the simplified folding stock M55. Over 100,000 guns were ordered, and were initially used by the United States Navy, Marine Corps and the United States Coast Guard, though some weapons were shipped to Canadian, Soviet, and other allied forces in the effort against the Axis powers. 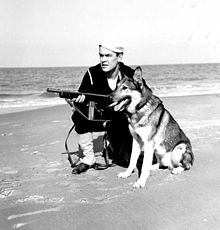 Though described as a submachine gun, the Reising was actually designed as a compact lightweight semi-automatic carbine that was also capable of fully automatic fire. The M50 was a selective fire weapon, capable of a fully automatic fire at a rate of 450–600 rounds per minute or semi-automatic fire. It was reported that the true full-auto rate was closer to 750–850 rounds per minute. Unlike the Thompson submachine gun, the Reising fired from a closed bolt.

As opposed to the then standard Thompson submachine gun, the Reising was lighter, easier to manufacture, and in mass production for the military was priced at approximately $50 per weapon as opposed to $225 per Thompson.[1]

There were five versions of the Reising, two selective fire models: the M50 and M55, two semi-automatic only variants—the M60 and the M65, a .30 Carbine light rifle variant[2] the latter one chambered for the .22 Long Rifle rimfire cartridge designed for training purposes.

There were several differences between the M50 and the M55. The most obvious one was the use of a rather flimsy, folding wire buttstock in the M55. The latter also eliminated the compensator and was simplified internally, making it lighter and shorter, with a reduced rate of fire. The M55 was originally issued to Marine parachute infantry and armored vehicle crews.

The M60 was a long-barreled, semi-automatic carbine model designed primarily for military training and police use. However, few of these were ever sold. The Marines used M60s for training, guard duty and other non-combat roles. Some M60s were believed to have been issued to Marine officers at Guadalcanal.[3] The remaining guns were passed on to State Guards and civilian law enforcement agencies.

The Reising entered military service primarily because of uncertainty of supply of sufficient quantities of the Thompson submachine gun. In the testing stage, it won out over some other competing designs. It was very light and quite accurate in aimed fire, attributed to its better stock fit and intricate closed bolt, delayed blowback design, though its firepower was somewhat limited due to the 20-round capacity of its largest magazine.[4][5] Most submachine guns fire from the open bolt position, meaning the full weight of the bolt slams forward when the trigger is pulled; with the Reising, only a lightweight firing pin striker moves when the trigger is pulled.

During World War II, quantities of the M50 Reising gun were issued to U.S. Marine Corps personnel deployed to the Pacific theatre, and were used in the Solomon Islands campaign, including the battle for Guadalcanal. Most Reisings were originally issued to Marine officers and NCOs in lieu of a compact and light carbine, since the M1 carbine was not yet being issued to the Marines. Although the Thompson submachine gun was available, this weapon frequently proved too heavy and bulky for jungle patrols, and initially it too was in short supply.[4]

The Paramarines and armoured crewmen were known to have been issued quantities of the folding stock M55, but the weapon's poorly designed wire-framed stock (which tended to fold while firing) soon earned the M55 a poor reputation.[8] The 1st Marine Parachute Battalion were issued the weapon in New Zealand[9] with other Marines only drawing their new Reisings onboard ship while headed towards Guadalcanal with a minimum of familiarization.

Unfortunately, the Reising was designed as a civilian police weapon and was not suited to the stresses of harsh battle conditions encountered in the Solomon Islands—namely, sand, saltwater and the difficulty in keeping the weapon clean enough to function properly. Tests at Aberdeen Proving Ground and Ft. Benning Georgia had found difficulties in blind-folded reassembly of the Reising, indicating the design was complicated and difficult to maintain. Many of the parts were hand fitted at the factory; this lack of parts interchangeability was not a problem for a civilian or police firearm, but it caused difficulty when Reisings were maintained in the field under combat conditions.[10]

While more accurate than the Thompson, particularly in semi-automatic mode, the Reising had a tendency to jam.[4] This was in part due to its overly complex delayed-blowback design.[10] This design used a system of levers within the breech block to release a firing pin that rusted easily in the humid jungle climate. This problem was exacerbated by the bolt delay recess in the receiver that could accumulate dirt or fouling from gunpowder, preventing the bolt from seating properly; if the bolt was not seated in its recess, the trigger disconnector prevented firing. In addition, the magazine was a staggered-column, single-cartridge feed design, and slight damage to the feed lips or debris in the magazine would render the magazine unusable. (A partial solution to the magazine problem was the later introduction of a single column magazine which reduced the capacity from 20 to 12 rounds.)

The Reising soon earned a dismal reputation for reliability under Guadalcanal combat conditions.[11] Reportedly, many Marines would discard the weapon upon finding just about anything else, and one NCO reportedly "decommissioned" his Reising by breaking the stock over the head of a particularly insolent "brig rat".[12] Lt. Col. Merritt Edson, commanding officer of a Marine Raider battalion, ordered all Reising submachine guns issued to his unit to be dumped unceremoniously into a river, so that his men might draw better weapons.[11] The M1 carbine, as it became available, was often chosen over both the Reising and the Thompson in the wet jungle conditions, with the built-in oiling pads in the receiver of the Thompson M1928 and M1928A1 being a liability.[13]

Withdrawal from the FMF

After the Marines proved reluctant to accept more Reisings, and with the increased issue of the .30-caliber M1 carbine, the U.S. government passed some Reising submachine guns to the OSS and to various foreign governments (as Lend-Lease aid). Canada purchased some Model 50 SMGs and these were issued to 2nd Battalions in Canada where the 1st Battalions of regiments were serving overseas. They were issued along with .30-06 M1917 Enfields and .30-06 Lewis machine guns. One such unit to receive them was the 2nd Bn Seaforth Highlanders of Canada. The Veteran's Guard of Canada were issued the weapon to guard German Prisoners of War.[15] Others were given to various anti-Axis resistance forces operating around the world.

Many Reising guns (particularly the M60 variant) were also released to U.S. law enforcement [16][17]and State Guards for guarding war plants, bridges, and other strategic resources. In this role the weapon proved more successful.

The Reising in film

As opposed to the vast use of the Thompson in films, the Reising is known to have appeared in the 1943 2Oth Century-Fox film Guadalcanal Diary where the Marine patrol is pinned down on the beach and being picked off by the Japanese defenders, and also in the 1944 RKO film Marine Raiders where the weapon jammed during a Guadalcanal sequence. A Reising appeared in the 1952 British film of the Malayan Emergency The Planter's Wife where Jack Hawkins called it a "Riesling". MGM used a Reising camouflaged to look like a German MP40 submachine gun in Go for Broke! and some episodes of Combat! and Shootout!. It also made an appearance in the 2000 film U571. The Reising was most recently seen in the 2010 HBO Mini-Series The Pacific in Episode 2 being carried by Sgt. John Basilone.