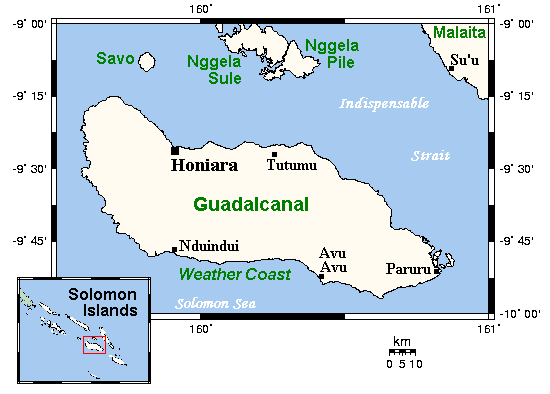 Guadalcanal is mountainous. Most of the population is along the north coast. The southern coast is known as the Weather Coast. Guadalcanal is infested with es, and is an endemic disease. Also, kunai grass thrives.

Transport is by a road along the north coast which extends most of the length of the island. Access to the Weather Coast is on foot or via boat or . , the Solomon Islands' main airport, is just to the east of Honiara. It was formerly known as Henderson Field and was built in 1942.

Much of the northern part of the island is fringed by steeply sloping raised s. Languages spoken on this island are and several different indigenous languages.

A Spanish expedition under charted the island in 1568. It was named by Mendaña's subordinate after his home town in , Guadalcanal. However, he did not spell the name consistently (using variously Guadarcana, Guarcana, and Guadalcana), and the island subsequently became known as Guadalcanar. The island later became part of the and, in 1932, the British changed its spelling to Guadalcanal. 'Guadalcanal' is a the Hispano-Arabic name of a town in Seville. The name comes from Arabic "Wādî al-Khānāt", meaning "Valley of the Stalls", from refreshment stalls which were set up there during Muslim rule in Andalusia.

Following the and , ese forces advanced into the South Pacific occupying many islands in an attempt to build a defensive ring around their conquests and threaten the lines of communication between the United States and Australia/New Zealand. They reached Guadalcanal in May 1942. When the allied forces spotted construction of an airfield on Guadacanal, the conducted the first amphibious landing of the war. It was one of the most hotly contested campaigns for control of the ground, sea and skies of the war. Guadalcanal became a major turning-point in the war as it stopped Japanese expansion. After four months of fighting the Japanese ceased trying to contest the control of the island. They finally evacuated it in February 1943.

Immediately after landing on the island, the allies began finishing the airfield begun by the Japanese. It was then named Henderson Field after a Marine aviator killed in combat during the Battle of Midway. Aircraft operating from Henderson Field during the campaign were a hodgepodge of Marine, Army, Navy and allied aircraft that became known as the . They defended the airfield and threatened any Japanese ships that ventured into the vicinity during daylight hours. However, at night, Japanese naval forces were able to shell the airfield and deliver troops and supplies, retiring before daylight. The Japanese used fast ships to make these runs, and this became known as the . So many ships from both sides were sunk in the many engagements in and around the Solomon Island chain that the nearby waters were referred to as . Many books were written about the Guadalcanal campaign.

The was fought on October 11, 1942 off the northwest coast of Guadalcanal. In the battle, ships intercepted and defeated a Japanese formation of ships on their way down 'the Slot' to reinforce and resupply troops on the island, but suffered losses as well. The in November marked the turning point in which Allied Naval forces took on the extremely experienced Japanese surface forces at night and forced them to withdraw after sharp action. Some Japanese viewpoints consider these engagements, and the improving Allied surface capability to challenge their surface ships at night, to be just as significant as the in turning the tide against them. After six months of hard combat in and around Guadalcanal and dealing with jungle diseases that took a heavy toll of troops on both sides, Allied forces managed to halt the Japanese advance and dissuade them from contesting the control of the island by finally driving the last of the Japanese troops into the sea on January 15, 1943. American authorities declared Guadalcanal secure on February 9, 1943.

Two U.S. Navy ships have been named for the battle:
*USS "Guadalcanal" (CVE-60), a World War II escort carrier.
*USS "Guadalcanal" (LPH-7), an amphibious assault ship.Interestingly, the crews of both "Guadalcanal"s had the rare experience of capturing another warship. See those ships' pages for more information.

To date, the only Coast Guardsman recipient of the Medal of Honor is Signalman 1st Class, , awarded posthumously for his extraordinary heroism on September 27, 1942 at Point Cruz, Guadalcanal. Munro provided a shield and covering fire, and helped evacuate 500 besieged Marines from a beach at Point Cruz; he was killed during the evacuation.

In early 1999, long-simmering tensions between the local Gwale people on Guadalcanal and more recent migrants from the neighbouring island of Malaita erupted into violence. The ‘’, later called (IFM), began terrorising Malaitans in the rural areas of the island, to make them leave their homes. About 20,000 Malaitans fled to the capital and others returned to their home island; Gwale residents of fled. The city became a Malaitan enclave and the took over government.

In 2003, the negotiated the intervention of or involving and other Pacific Island Nations.