These pistols were popular civilian firearms for much of their life, and also served as United States General Officer pistols from the 1940s until their replacement by the M15 General Officers pistol in the 1970s. The Office of Strategic Services issued the Model 1903 to its officers during World War II.

In addition to lawful owners, many gangsters of the pre-World War II era favored the Model 1903 and Model 1908 because they were relatively small and easily concealed. It is said that Al Capone kept one in his coat pocket and Bonnie Parker used one to break Clyde Barrow out of jail after smuggling it into the jail by taping it to her thigh.

Note: There was also a Colt Model 1903 Pocket Hammer pistol in .38 ACP, but this design is unrelated. The FN Model 1903 pistol design is related to the Colt Pocket Hammerless, but it is physically larger due to its chambering in 9 x 20 mm SR Browning Long cartridge.

Approximately 570,000 Colt Pocket Hammerless pistols were produced from 1903 to 1945, in five different types (see Variants paragraph below). Some were issued to US Army and US Air Force general officers from World War II through the 1970s, when stocks ran out. Recipients included Generals Eisenhower, Bradley, Marshall, and Patton. Patton's Model 1908 was embellished with three (later four) stars on the grip panels to denote his rank. General Officer models were issued with a brown or black (depending on service and regulations) leather holster, pistol belt, and ammunition pouch. A cleaning rod and two spare magazines were also included. The pistol was often engraved with the officer's name. 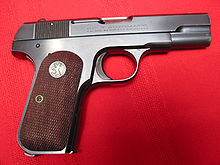 Special features include a serrated slide to prevent slippage during manual cycling of the slide, and two safety mechanisms (a grip safety and a manual safety). A magazine safety was added on later models; this feature prevents the pistol from being fired with a round in the chamber and the magazine removed. Despite the title 'Hammerless', the Model 1903 does have a hammer, but it is hidden from view by the gun's slide. In 1908, a .380 ACP version of this gun was introduced. Called the Model 1908, it was nearly identical to the Model 1903 except for the bore diameter and the magazine, which held seven rounds (one less than the Model 1903).

Sights were fixed, although the rear sight was drift-adjustable for windage.

Metal finish was blued or nickel, and some special-order finishes such as engraved, silver or gold plated.