The USC Marshall School of Business is a private research and academic institution at the University of Southern California. It is the largest of USC's 17 professional schools. The current Dean is James G. Ellis. In 1997 the school was renamed following a US$35 million donation from alumnus Gordon S. Marshall.[4]

The Marshall School began as the College of Commerce and Business Administration in 1920. The Graduate School of Business Administration was established in 1960.[4] It is the oldest AACSB accredited school of business in Southern California.[5] The Entrepreneurship Program, the first of its kind in the United States[citation needed], was established in 1972 and is internationally recognized[clarification needed]. It has now been renamed The Lloyd Greif Center for Entrepreneurial Studies. The Pacific RIM Education (PRIME) program was implemented in 1997 as the first ever MBA course of its kind[citation needed] to require all first year full-time MBA students to participate in an international experience.

The Leventhal School of Accounting was formed within the school on February 7, 1979. All of its classes are offered at the University Park campus in Los Angeles.

The school occupies four multi-story buildings on campus: Hoffman Hall, Bridge Hall, the Accounting building, and Popovich Hall, which is the MBA building.[4]

This is the main building of the Marshall School. The $20 million, 55,000 square feet (5,100 m2), building opened in 1999 as one of the most technologically advanced business school buildings[6] in the United States. It was named after alumni J. Kristofer Popovich and Jane Hoffman Popovich, for their $5 million gift. The hall provides state-of-the-art technology and eight case-study rooms fully equipped with audio-video teleconferencing devices, thirteen Experiential Learning classrooms capable of transmitting lectures and presentations throughout the building, more than 1,100 data connections outlets throughout the building, a courtyard, and more than 15 miles (24 km) of fiber-optic and cable wiring in its Modern Career Resource Center.

This hall houses all undergraduate offices for the Marshall School of Business. It also houses several classrooms as well as the original Experiential Learning classrooms. 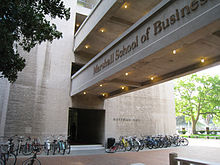 This hall, which opened in 1973 and stands eight stories tall, houses the Crocker Business Library and Computer Services. It is named for Leslie Hoffman, father of Jane Hoffman Popovich. It was designed by I. M. Pei.

The Marshall School offers a Bachelor of Science in Business Administration. There are several joint programs that offer studies with International Relations and Cinematic Arts in combination with Business Administration. New students take a business core and have other time to fulfill the USC Core and take elective classes. Until the 2010-2011 academic year, each student chose a concentration to complete with the degree. It also offers an undergraduate Bachelor Science in Accounting degree through the Leventhal School.

Full-time Master of Business Administration (MBA): Marshall’s two-year full-time MBA comprises a straightforward intensive core and two electives delivered in the four-term first year, followed by a wide range of[weasel words] electives and concentrations in the second year. The core concludes with PRIME, a required research trip to Pacific Rim countries to visit selected companies, both domestic[clarification needed] and multinational, and government institutions. In the second year students can choose elective subjects from concentrations or design their own. Courses are often shared with MBA/PM and IBEAR students.[4]

Part-time MBA: The part-time MBA for Professionals and Managers (MBA.PM) is a 33-month programme, though it can be taken over a five-year period. It consists of 12 months of core classes followed by electives. After the core all students take PM Globe, a semester-long macroeconomics course that includes a one-week overseas trip to a Pacific Rim country. The core can be taken at either the USC university Park campus in Los Angeles or the USC Orange County Centre in Irvine. All elective courses are taught at the main campus. Students attend classes two evenings a week.[4]

Executive Education: The USC Marshall Office of Executive Education draws on the resources and expertise of one the top ranked business schools in the U.S. and the world to provide business knowledge and functional skills to working professionals within companies. An integrated, collaborative approach with partner companies allows us to create custom programs structured to help today’s companies achieve their goals in a global economy.

Global Executive Education: The Global Executive MBA (GEMBA), an international version of Marshal's EMBA program, began in Shanghai, China in collaboration with Jiao Tong University in 2004. Classes are taught primarily in Shanghai by USC Marshall professors. Like the US-based EMBA program, GEMBA is a 21 month Executive MBA where students maintain their full time jobs while studying. The GEMBA program meets on ten occasions from Thursday through Monday in Shanghai every six to eight weeks, as well as meeting for eight to nine days at the USC campus in Los Angeles on two separate occasions. The program also includes one five day study session in an Asian country other than China. This schedule structure allows students from around the Pacific Rim to fly in for classes. Homework and case study analysis is performed by students between sessions.[4]

Ranked within the top 15 world business research institutions,[10] the Marshall School offers a full-time doctoral program within the five academic departments. The program generally lasts 4-5 years with up to 2 years of dissertation. Along working with notable faculty, doctoral students also receive substantial financial aid, such as graduate assistantship and a living stipend, during their study.[11]

The Marshall School has over 67,000 alumni worldwide in 44 countries. USC has the largest population of foreign alumni of any university in the United States[citation needed]. Its members often refer to themselves as part of the Trojan Family, and this is seen[weasel words] as an advantage because of the common connection. Events at Marshall often emphasize the importance of networking within the Trojan Family[citation needed].