Despite being perceived as a tight race in the run-up to voting, with the Globe and Mail expecting it to be the "closest in more than a decade",[2] the NDP took 37 seats as an improvement of one from the 2007 election - thus gaining their largest majority ever in the Assembly - whilst the Progressive Conservatives failed to make any gains beyond closing the gap in the popular vote, and not a single incumbent was defeated.[3] The PC leader Hugh McFadyen announced shortly thereafter that he would resign his post.

The Green Party and the NDP have chosen new leaders since the last general election.

On August 27, 2009 Premier Gary Doer, after being Premier of Manitoba for ten years announced his resignation as Premier and leader of the NDP. The following day he was appointed Canada's Ambassador to the United States.[4][5]

Three candidates entered the campaign to replace Doer: Steve Ashton, Greg Selinger and Andrew Swan. On September 28, 2009, Swan bowed out of the race and endorsed Selinger. Some pundits believe this was an attempt to stop Steve Ashton from becoming leader.[6]

Ashton, first seen as a minor candidate, ended up being a heavy-weight and, gaining momentum, scored big victories in some ridings, however it wasn't enough to convince many MLAs or win union endorsement. Selinger won the leadership election on October 17, 2009 with 65.75% of the ballot. His victory was achieved in large part by being backed by unions and the vast majority of the party elite.[5][7]

The Green Party elected James Beddome to a two-year term party leader on November 15, 2008, defeating incumbent Andrew Basham and third candidate Shane Nestruck. After his victory, he said that he would work toward running a full slate of candidates in the next provincial election. He was the party's candidate for a by-election in the northeast Winnipeg division of Elmwood in early 2009.

New boundaries are in effect for the 2011 election, so some ridings not listed may come into place in the next election with population movements.

Incumbents not contesting their seats 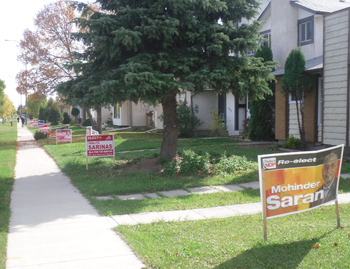 Election signs for the major parties in the riding of The Maples.

Manitoba Hydro planned an alternative hydro-electric transmission line to Bipole I and II routes running through the Interlake region in Manitoba. Initially it planned a more easterly route to the east of Lake Winnipeg. The NDP ignored the expert opinion of Manitoba Hydro and decided to build the line on the west side of the province at a cost of $4.1 billion. Further, the NDP proposed the creation of a large UNESCO environmental heritage site named Pimachiowin Aki. Just days before his retirement as premier, Doer announced that the government would donate $10 million to the trust fund for UNESCO World Heritage site on the east side of Lake Winnipeg.[23] The NDP claimed that an east side Bipole III route would jeopardise the UNESCO site and claimed that a heritage site would benefit First Nations communities more.[24] The NDP proposed a longer, more expensive, alternative route through the west of Manitoba to preserve the environmental integrity of the east side. Subject to the Environmental Impact Statement to be completed in June 2011, the construction of the line will begin in the winter of 2012, one year after the election.[25]

Progressive Conservative leader Hugh McFadyen opposes the western route stating that it would cost $1 billion to $1.75 billion more, it would destroy more trees, 15 out of 16 First Nations believed the Bipole III would be more economically beneficial, and would be more at risk from disasters as the Bipole lines in the Interlake.[24] McFadyen promised that if elected he would cancel the western route, and build it down the east side.[26] McFadyen also supported the UNESCO site on the east side and claims that Bipole III would not jeopardise the World Heritage Site.[23][24]

Liberal leader Jon Gerrard proposed that instead of building the line down the east or west, Manitoba Hydro should put the cable under Lake Winnipeg as proposed by Dr. John Ryan, retired University of Winnipeg professor in 2008.[27] In the fall of 2010 Gerrard asked Manitoba Hydro CEO Bob Brennan if he had inquired into the Lake Winnipeg route. Brennan said that he had not. Gerrard promised to build the line through Lake Winnipeg if elected.[28]