Drive-in theatres (also known as Drive-In Cinemas or Drive-ins) were once very popular in Australia. Although considered an American invention there is evidence of outdoor cinemas in Western Australia where some patrons attended in their cars as far back as 1938, and it is possible that these facilities may even predate the first American style drive-in theatre.[1]

The first American style drive-in theatre to open in Australia was the Skyline in the Melbourne suburb of Burwood on 18 February 1954.[2][3] It was the first of 330 drive-in theatres that would open across Australia.[3]

Many have since closed with the large amounts of land taken up by drive-ins being sold off to build houses or shopping centres. Although in recent years a number of drive-in theatres have reopened and/or expanded the number of screens available.

In the 1990s, the Coburg Drive-in Theatre in Melbourne, was expanded to 3 screens,[4] as was the Dromana Drive-in Theatre.[5] In more recent times the former Dandenong Panoramic Drive-in, in Victoria, has been reopened as the Lunar Drive-in Theatre[6] and now boasts 4 screens making it Australia's largest drive-in theatre with the most screen choice.

The Wonga Drive-in Theatre in Queensland has also expanded and now has 3 screens also. The Rodeo Drive In at Mareeba, near Cairns has new owners and is attracting good crowds. More recently the Tivoli Drive-in near Ipswich has been reopened as well. 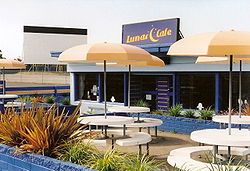 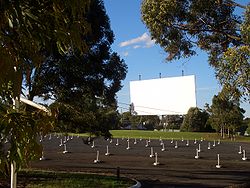 Along with a few metropolitan operations, there are a number of drive-in theatres serving remote communities such as Jericho in Queensland.

The remaining drive-ins provide a glimpse of what was a very popular pastime in the 1950s and 1960s. The following is a listing of Australia's remaining open drive-in theatres. It also includes portable operations in which patrons can either drive or sit down to see a movie outdoors.

Following a visit to the United States in the early 1950s Hoyts’ southern division manager, George Griffith Jnr, believed that drive-in theatres would be successful in Australia.[2][7][8] Hoyts and Fox however did not share Griffith’s enthusiasm for the establishment of a drive-in theatre, so Griffith subsequently formed a syndicate, Auto Theatres Pty Ltd,[2] which decided on a site in the Melbourne suburb of Burwood for Australia's first drive-in theatre. Construction proceeded through the latter half of 1953 from plans drawn up by AC Leith Bartlett & Partners in conjunction with RCA Australia.[7][8] The Skyline Burwood officially opening on 18 February 1954[3] and proved extremely popular, with traffic jams in both directions along the Burwood Highway.[8] Hoyts subsequently bought out Griffith and his partners.[2]

Following the success of the first drive-in theatre, the Skyline (Burwood), Hoyts quickly opened Skyline drive-in theatres at Preston in 1954,[9] and Oakleigh in March 1955.[10] The next Hoyts drive-in was constructed in Broadmeadows (1958),[11] but then there was a break of almost 10 years until Hoyts acquired drive-ins at Coburg and Oakleigh and constructed new drive-ins in Bulleen (1965), Wantirna (1968) and Altona. In 1972 the Broadmeadows Skyline was the first of the Melbourne suburban drive-ins to close,[11] whilst the Oakleigh site was the last drive-in operated by Hoyts in the world, when it finally closed in 1990.[10]

Today Melburnians are the most fortunate drive-in patrons having the luxury of 10 screens in their immediate vicinity to choose from (counting Rosebud as being basically suburban Melbourne). Rural Victorians however have been less fortunate with no drive-in theatres currently in operation.

The Lunar Dandenong is now Australia's largest and oldest (still in operation) drive-in theatre.[6] It was first opened 4 May 1956 and was constructed by J and K Houlahan from plans drawn up by Baily and Tilley.[6] The original capacity was to be for 400 cars however this was redesigned to accommodate 600 cars, with the final capacity being 634 cars. The drive-in closed on 18 April 1984 and was subsequently purchased by Trash and Treasure Australia Pty Ltd, who operated a Sunday market on the site in the 1970s.[6] On 19 September 2002 it reopened as a two screen drive-in, with a third screen added in September 2003 with a 950 car capacity.[6]

Coburg opened in November 1965, under the ownership of Sillman and Sharp.[4] It was acquired by Hoyts in 1967 until it closed in 1984.[4] Hoyts were unable to sell the site despite numerous attempts and in 1987 Village joined with Hoyts and re-opened Coburg as a twin screen in 1987.[4] A third screen was added in 1995. Coburg was Australia's largest drive-in theatre with an 850 car capacity,[4] until the expansion at Dandenong in 2003.

The Dromona was opened in 1961 with a capacity of 485 cars.[5] It has since been expanded to a three screen operation and has a Sunday market operating from the site.

The Skyline in Bass Hill was the first drive-in theatre in New South Wales. It opened in November 1956, with a 724 car capacity and until it closure in September 2007 was Australia's oldest continually operating drive-in theatre.[12][13] This was followed by a Skyline in Newcastle in December 1956 at a cost of $200,000, with a capacity for 722 cars and a holding area for a further 420.[14] The Newcastle Skyline closed in June 1985.[14] Until recently the Greater Union Blacktown Drive In was one of Sydney's last remaining drive-ins,[15] however a new seasonal facility with a blow up screen has recently started at Randwick Racecourse. A few small community drive-ins remain in rural NSW.

Blacktown Skyline was opened in the 1960s. It was the first of the Consolidated circuit to add a second screen in 1984 and has a capacity of 700 cars.[15] It is currently operated by Greater Union.

The Burleigh Heads Drive-in was one of Queensland's first drive-ins when it opened in 1957 with a 500 car capacity. The Skyline Drive-in located in Sunnybank Hills was the second drive-in to operate in Brisbane when it opened in 1957. It could hold 650 cars on its 17 acres and also had a children’s railway line, putt putt, badminton facilities and a dance floor. It was followed by the Starlight drive-in at Aspley, which was opened in January 1957 (at a cost of £100,000), and the Skyline drive-in at Coopers Plains in April 1957 (at a cost of £200,000), with a 650 car capacity.

The Wonga drive-in was opened in 2002, with a second screen added in 2004, increasing it to a 250 car capacity.[16] A third screen was subsequently added however in January 2010 it was closed, when its owner when into receivership.[17][18] In September 2010 a new owner took over the operation of the drive-in reopening in December.[19]

The Stardust drive-in was opened in September 1964, with a capacity of 360 cars.[20] Built within the grounds is a hardtop cinema, so patrons can choose between outdoor and indoor movies.

The Yalta Drive-In is the Gold Coast's last open-air drive-in theatre (in an area which formerly had over 20 drive-in theatres), formerly Beenleigh Drive-In, it opened on 27 October 1974, and in 2000 the theatre was renamed Yatala Twin Drive-In when a second screen was added.

The Charters Towers Tors drive-in was opened in 1966 and has two screens with capacity for 300 cars.[21]

The Jericho drive-in is the smallest public drive-in located in Australia, and possibly the world, with a capacity for 35 cars. It was opened in 1969.[22]

The Mareeba Rodeo drive-in was built by Far Northern Theatres in the 1960s.[20] Far Northern Theatres had a circuit that extended right through far northern Queenland and into Papua New Guinea. The circuit was sold to Birch Carrol & Coyle in the 1970s.[20] In the mid-1980s, Birch Carrol & Coyle pulled out and the Rodeo was sold to Norm Janke. Janke operated the drive-in until 1998 when it closed.[20] It subsequently re-opened in 2002, with a 300 car capacity.

The first conventional drive-in located in Western Australia was the Highway, opened in the suburb of Bentley in October 1955[1][23][24] (with a 642 car capacity[25]), this started a boom in suburban drive-ins which saw a further eight operating by the end of the decade (the Skyline in Floreat in November 1955, Mott's in Gosnells in January 1956, the Panorama in Roleystone in March 1956, the Metro in Innaloo and the Lakeway in Swanbourne in April 1957, the Melway in Melville, the Wirrina in Morely in March 1959 and the Eastway in Belmont in July 1959) and another nine opened in the 1960s: growth then slowed to only five more built in the 1970s with the last drive-in theatre, Aceway in the suburb of Morley, constructed in 1980.[1][26]

In the country areas, the first to open was the Oasis in Geraldton in 1957, and there were only three more built in the 1950s; the Mayfair in Bunbury, the Avonway in Northam and the Morcady in Wongan Hills. The boom years in the country were the sixties, which saw 61 drive-ins opened, with growth then slowing to only six more built in the seventies and one in the eighties.[1][27]

By the 1990s there were only three suburban drive-ins that remained; the Metro in Innaloo, which closed in 1993, the Highway in Bentley, which closed in 1994, and the Galaxy in Kingsley, which still remains open.[1] There are however a significant number of drive-in theatres, and car-friendly outdoor cinemas still operating in rural Western Australia.

The Galaxy was opened in 1973 and is the only suburban drive-in theatre in Perth.

The Blue-Line drive-in located in West Beach, Adelaide was the first drive-in located in South Australia,[28] and the first to be constructed outside of Melbourne.[29] It was opened on 28 December 1954, it was followed by the Mainline Drive-In theatre at Gepps Cross on 7 October 1955, which was Australia's first drive-in / walk-in theatre (with a capacity for 500 cars and seating for 400 patrons).[29] It was followed by the Shandon in Seaton in early July 1956, the Hi-Line in Springbank in March 1957, and the MGM Metro at Marion in June 1957.[29] The first country drive-in opened at Port Pirie in September 1957.[29]

Following the closure of the Valleyline at St Agnes in May 2003 only the Wallis Mainline Drive-in at Gepps Cross is the only remaining drive-in located in metropolitan Adelaide.[29] In the country areas, the closing of Riverview at Murray Bridge in February 2005 (after 46 years)[30] and the Riverland in Barmera in September 2008,[31] only the community run facility at Coober Pedy, the Coober Pedy Open Air Outback Cinema, remains.[29]

The Wallis Mainline, which opened in October 1955, not only operates as a drive-in theatre but also as Gepps Cross Treasure Market on Sunday mornings.

Darwin was home to the Paspalis (Nightcliff) Drive-in theatre which was the largest privately owned drive-in located in Australia, which was opened in 1965 and closed in 1985.

The ACT had two drive-in theatres, the Starlight in Watson (opened in January 1957 and closed in 1993), which has now been redeveloped for medium-density housing,[34] and the Sundown at Narrabundah (opened in 1968 and closed in 1984)[35] which is now a caravan park.