"Confide in Me" is a dance–pop song performed by Australian singer Kylie Minogue and written by Steve Anderson, Dave Seaman and Owain Barton. It was produced by Brothers in Rhythm, and received a good overall reception from music critics when it was released as the first single from Minogue’s fifth album, Kylie Minogue, in the third quarter of 1994. In 2004, Simply Vinyl re-released the song as a vinyl single on their S12 label to celebrate the tenth anniversary of its release.

The single peaked at number two in the United Kingdom and spent five weeks at number one in Australia. The song became a modest dance club hit in the United States, peaking at number thirty-nine on the Billboard Dance/Club Play Chart in 1994. "Confide in Me" won three ARIA Music Awards in Australia for Best Selling Australian Single, Best Video and Best Selling Australian Dance Track in 1994. The song also placed seventh for Best Single and third for Best Video at the 1994 Smash Hits Awards. 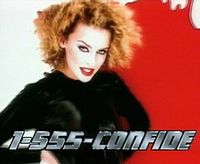 Minogue in the music video for "Confide in Me".

"Confide in Me" featured a colourful music video that was directed by Paul Boyd and filmed in Los Angeles in July 1994. The video features Minogue talking on the phone, urging people to call and confide in her. There are six sequences; all of which feature Minogue in front of different backgrounds playfully dancing and posing for the camera. The number "1-555-Confide" is featured at the bottom of the screen during select sequences. As the video concludes, all of the scenes are intercut and gradually fade. Minogue wears six costumes during the course of the video, with each one being accompanied by different hairstyles and makeup.

Released to music video channels prior to the single's commercial release, the video was a hit, charting at number one on Dial MTV and at number sixteen on MTV Europe's top twenty countdown. The video was released commercially on the Ultimate Kylie companion DVD, released in December 2004.

Two songs were released as B-sides to the commercial single release of "Confide in Me". "Nothing Can Stop Us", written by Bob Stanley and Pete Wiggs and produced by Saint Etienne, was considered as Minogue's Deconstruction single debut, but was withdrawn. Promotional copies of song were released to the media and featured the 7" remix of the song released on the "Confide in Me" single. The original version of "Nothing Can Stop Us" was not released until the Kylie Collection "Confide In Me - The Irresistible Kylie" on the second CD.

"If You Don't Love Me", a cover of the Prefab Sprout song, was written by Paddy MacAloon and produced by Steve Anderson. In 2000, the song was included on the budget compilation Hits+. This song has been added to the setlist of Kylie's Aphrodite World Tour.[2]

In Australia, the single peaked at number one and remained on top of the singles chart for five weeks, becoming the highest selling Australian single of 1994. It also reached #30 in the Triple J Hottest 100, Kylie's best solo performance on that countdown (her duet with Nick Cave would later reach the top ten). "Confide in Me" debuted and peaked at number two on the UK singles chart, and became her first single to do so since 1992's "Give Me Just a Little More Time". It remained on the chart for nine weeks, spending three weeks in the top ten. In September 1994, the single was certified silver in the UK for shipments of at least 200,000 copies [3] and sold 154,040 copies. In most European countries, the song was a top twenty hit on both the singles and airplay charts. In the U.S. "Confide in Me" became Minogue's third single to chart on the Billboard Dance/Club Play Chart, peaking at number thirty-nine.

These are the formats and track listings of major single releases of "Confide in Me".[4]

Kylie performed the song on the following concert tours:

Example's "No Sleep For The Wicked" from the 2007 album What We Made samples the track heavily.

The song features in the stage musical, Priscilla Queen of the Desert – the Musical