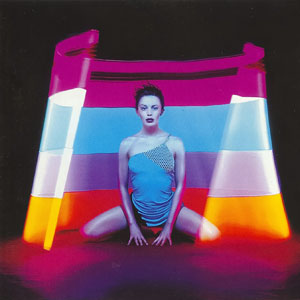 "Impossible Princess" is the sixth by Australian pop singer . It was released by on 23 March 1998 in the United Kingdom to mixed reviews. The album was produced by Dave Ball, Ingo Vauk, and . Most critics complimented its maturity and personal subject matter, while others called it uninspired and unbelievable. "Impossible Princess" was a success in Minogue's native Australia, it reached number four on the Australian albums chart, number one on the Australian Music Report chart in January 1998

The album represented a change in Minogue's musical style and featured several live instruments. "Impossible Princess" became the first album Minogue had full creative control over, which resulted in her contributing to all of the that appeared on the album. [Baker and Minogue, Hodder and Stoughton, 2002. p 107.] The album was retitled "Kylie Minogue" at the last minute in the UK following the death of Princess Diana in August 1997. ["The Complete Kylie". "Cleo". November 1997.] A remastered edition of "Impossible Princess" was issued by in 2003 with a bonus disc of es and B-sides.

In 1995, Minogue recorded the song "", a duet with Australian rock musician . The song's narrated a murder from the points of view of both the murderer (Cave), and his victim (Minogue). The song was a chart and critical success which demonstrated that Minogue could be accepted outside of her established genre as a dance artist. That year, she recited the lyrics to "" as poetry in London's "Poetry Jam" at Cave's suggestion. She later credited him with giving her the confidence to express herself through her music, saying, "he taught me to never veer too far from who I am, but to go further, try different things, and never lose sight of myself at the core. For me, the hard part was unleashing the core of myself and being totally truthful in my music".

The following year Minogue began a relationship with French photographer .

, a duo consisting of Steve Anderson and , were chosen as the main producers of the album. In 1995, Minogue and Brothers in Rhythm began recording rough demos at Real World studios in Bath, England. The demos consisted of Minogue's lyrical ideas over various s. The demos were later rearranged and real instruments were added to replace the samples or keyboards initially emulating them.

Minogue began writing lyrics for "Impossible Princess" in 1996 during her trips with Sednaoui to the U.S. and China. When she returned, Minogue was constantly writing down words, exploring the form and meaning of sentences. [Baker and Minogue, Hodder and Stoughton, 2002. p 111.] She had written lyrics before, but called them "safe, just neatly rhymed words and that's that". [John Walsh. "Lucky In Luck". "". November 1997.] For "Impossible Princess", she took inspiration from Sednaoui and her own experiences as a celebrity. Minogue initially had a hard time embracing her past, looking back on it as a time of pain and confused embarrassment. [Baker and Minogue, Hodder and Stoughton, 2002. p 112.] Confronting her past helped her improve her confidence; she said "it was like I'd climbed , or jumped out of a plane. So many things that I had avoided for so long were right there. That was what Nick (Cave) was saying to me. 'It'll be brilliant. It'll confront all of your past, all in one fell swoop'. And he was right." ["Kylie Defeats Her Demons". "The Australian". September 1997.] In 1996, Minogue collaborated with members of the band . She first met with Manic Street Preachers' lead singer, at his home. She brought some lyrics she had written and he strummed a Tamla Motown-type track on his guitar. Bradfield later sent her a demo of "I Don't Need Anyone", which she loved, stating "it was so refreshing to hear something so different from what I had been working on. To have something so fresh come in that somebody else had been working on and taken control of, was a nice break for me."

The album became the first release to contain songs solely written by Minogue. Minogue composed the song "" on a grand piano; additional instruments were added during production. Minogue wrote dozens of songs with various producers over a two-year period, many of which remain unreleased. After a set of lyrics were completed, she would record a vocal demo and evaluate the song's potential.

Minogue had greater freedom to make "Impossible Princess" sound as she wanted it to. Deconstruction's department had not been present for much of the recording, due to the poor health of its head, Pete Hadfield. [Baker and Minogue, Hodder and Stoughton, 2002. pp 113–114.] This left Minogue with creative control over the project. At first she believed that the album contained too many musical styles, but changed her mind, stating, "I thought, partly to justify it to myself, but mainly because it's the truth, that if I had a whole album that sounded like "Some Kind of Bliss", or a whole album that sounded like "Too Far", it would be a lie, because I'm all over the place as a person".

The name of the album is a reference to a book of written by titled "Poems to Break the Hearts of Impossible Princesses". The book was given to Minogue as a gift by Nick Cave, and she has said that the poems summarized where she was at that time in her life. [Frances Whiting. "Princess Kylie on the Move". "Sunday Mail". 26 April 1998.] In the United Kingdom and Europe, the album's title was changed to "Kylie Minogue" following the death of in August 1997. Minogue has since explained the name change: ["The Complete Kylie". "Cleo Magazine". November 1997.]

Minogue and Sednaoui wanted to create a special three-dimensional cover for a limited edition of "Impossible Princess" to represent Minogue's three-dimensional personality depicted on the album. The cover photo shoot ran for a week, with Minogue not leaving the studio until 3:00 or 4:00 a.m.. Shooting a cover in 3-D required multiple static s and for Minogue to pose for long periods of time, which she quickly grew tired of.

In Britain, "" gave the album a negative assessment, writing that "Kylie's vocals take on a stroppy edge...but not strong enough to do much". ["Review of "Impossible Princess". "". August 1997.] Ben Willmott, in a review for "", was less than impressed with the album and Minogue's musical direction, calling her "a total fraud" and "unconvincing". Willmott was also critical of Minogue's collaborations with James Dean Bradfield, calling "Some Kind of Bliss" "supremely irritating". He gave the album four out of ten stars in his review. [Ben Willmott. "Review of "Impossible Princess". "". September 1997.]

"", the first single, became Minogue's least-successful release, reaching number twenty-two on the . [ [http://www.kylie.com/2006_site/music/some_kind_of_bliss.htm "Some Kind of Bliss"] . Kylie.com. Retrieved 7 August 2007.] Written with of the , the song gave Minogue an edgier sound, with guitars taking the place of the drum machine beats heavily featured in her earlier efforts. [Review of "Some Kind of Bliss". "". 30 August 1997.] The single was released the week of Princess Diana's funeral and had to compete against Elton John's "Candle in the Wind 1997", which became the fastest-selling single in the UK, selling 658,000 copies in the UK on that day alone, and over 1.5 million copies in its first week and it would remain at number one for 5 weeks.

The second single "" featured an aggressive vocal style, with alternative and Eastern musical influences. ["Possibly, Princess". "HeadCleaner". 1998.] It became a top-twenty hit for Minogue in the UK and Australia. [ [http://www.kylie.com/2006_site/music/did_it_again.htm "Did It Again"] . Kylie.com. Retrieved 7 August 2007.] The song also featured a , directed by Pedro Romanhi. Minogue satirised her image in the video, in which four major incarnations of her career, "Indie Kylie", "Dance Kylie", "Sex Kylie", and "Cute Kylie", battled for supremacy.

"Breathe", the third single, reached the top twenty in the UK, and was moderately successful in other parts of the world, reaching number one in and the top forty in Australia. [ [http://www.kylie.com/2006_site/music/breath.htm "Breathe"] . Kylie.com. Retrieved 7 August 2007.] "" was exclusively released as a single in Australia due to the success of Minogue's Intimate and Live concert tour.

The re-release of "Impossible Princess" includes a bonus disc of remixes and B-sides.

*Intimate and Live Tour – Minogue's concert tour in support of the album.