Rubus chamaemorus (Greek chamai "on the ground", moros "mulberry") is a rhizomatous herb native to alpine and arctic tundra and boreal forest,[1] producing amber-colored edible fruit similar to the raspberry or blackberry. English common names include cloudberry, bakeapple (in Atlantic Canada), Knotberry and Knoutberry (in England), Averin and Evron (in Scotland).

Unlike most Rubus species, the cloudberry is dioecious, and fruit production by a female plant requires pollination from a male plant.

The cloudberry grows to 10–25 cm high. The leaves alternate between having 5 and 7 soft, handlike lobes on straight, branchless stalks. After pollination, the white (sometimes reddish-tipped) flowers form raspberry-sized berries. Encapsulating between 5 and 25 drupelets, each fruit is initially pale red, ripening into an amber color in early autumn.

Cloudberries occur naturally throughout the Northern Hemisphere from 78°N, south to about 55°N, and very scattered south to 44°N mainly in mountainous areas. In Europe and Asia, they grow in the Nordic countries, especially in Finland and much in the Baltic states; sometimes in the moorlands of Britain and Ireland, and across northern Russia east to the Pacific Ocean. Small populations are also found further south, as a botanical vestige of the Ice Ages; it is found in Germany's Weser and Elbe valleys, where it is under legal protection. In North America, cloudberries grow wild across most of northern Canada, Alaska, northern Minnesota, New Hampshire, Maine, and a small population on Long Island, New York.

The cloudberry can withstand cold temperatures down to well below -40°C, but is sensitive to salt and to dry conditions. It grows in bogs, marshes and wet meadows and requires sunny exposures in acidic ground (between 3.5 and 5 pH).

Cloudberry leaves are food for caterpillars of several Lepidoptera species. The moth Coleophora thulea has no other known foodplants. See also List of Lepidoptera that feed on Rubus. 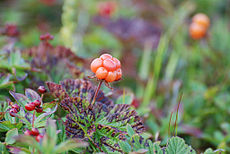 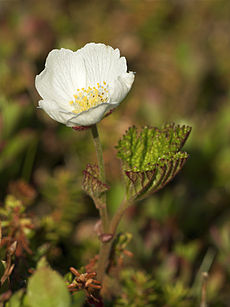 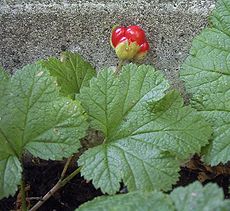 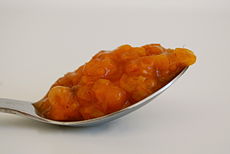 Wide distribution occurs due to the excretion of the indigestible seeds by birds and animals. Further distribution arises through its rhizomes which can develop extensive berry patches. Cuttings of these taken in May or August are successful in producing a genetic clone of the parent plant.[2]

Despite its modern demand as a delicacy exceeding supply (particularly in Norway) the cloudberry is primarily a wild plant. Wholesale prices vary widely based on the size of the yearly harvest, but can reach 10€/kg.[3]

Since the middle of the 1990s, however, the species has formed part of the "Northernberries" research project. The Norwegian government, in cooperation with Finnish, Swedish and Scottish counterparts, has vigorously pursued the aim of enabling commercial production of various wild berries (Norway imports 200 - 300 tonnes of cloudberries per year from Finland). Beginning in 2002, selected cultivars have been available to farmers, notably "Apolto" (male), "Fjellgull" (female) and "Fjordgull" (female). The cloudberry can be cultivated in Arctic areas where few other crops are possible, for example along the northern coast of Norway.

The ripe fruits are golden-yellow, soft and juicy, and are rich in vitamin C. When eaten fresh, cloudberries have a distinctive tart taste. When over-ripe, they have a creamy texture somewhat like yogurt and a sweetened flavour. They are often made into jams, juices, tarts, and liqueurs. In Finland, the berries are eaten with "leipäjuusto" (a local cheese; the name translates to "bread-cheese"), and lots of cream and sugar. In Sweden, cloudberries or cloudberry jam, are used as topping for ice cream, pancakes and waffles. In Norway, they are often mixed with whipped cream and sugar to be served as a dessert called "multekrem" (Cloudberry cream), as a jam or even as an ingredient on home made ice cream. They may also be added to cakes that often contain marzipan. In Canada, cloudberries are used to flavour a special beer. Canadians also use them for jam, but not on the same scale as Scandinavians. In Alaska, the berries are mixed with seal oil, reindeer or caribou fat (which is diced up and made fluffy with the seal oil) and sugar to make "Eskimo Ice Cream" or Agutak. The recipes vary by region. Along the Yukon and Kuskokwim river areas, white fish (pike, whitefish) along with shortening and sugar is used. Due to its high vitamin C content, the berry is valued both by Nordic seafarers and by Canadian Inuit as protection against scurvy. Its high benzoic acid content acts as a natural preservative.

In Nordic countries traditionally liqueurs such as Lakkalikööri (a Finnish liqueur) are made of cloudberry. It has a strong taste and a high sugar content. Cloudberry has also served as a spice for akvavit.

Dogfish Head Brewery has made an Arctic Cloudberry Imperial Wheat[4] beer, which was inspired by the cloudberry lambic[5] dubbed Soleil de Minuit made by Brasserie Cantillon for the Akkurat pub in Stockholm. BrewDog also makes a double IPA beer made with Cloudberries, called "My Name is Ingrid.

In Sweden, Grythyttans vin[7] produces a real fermented wine from cloudberries. The company started in 1999 and issued the first bottles in 2000. The wine is popular with blue cheese and desserts.

A cloudberry liqueur is also made in the northeastern Quebec region of Canada. The liqueur is known as chicoutai, which is the local aboriginal name for the cloudberry.

The Swedish National Democrats have the male cloudberry flower as their logo.