The Amazing Race: China Rush (Chinese: 极速前进：冲刺！中国; pinyin: Jísù Qiánjìn: Chōngcì! Zhōngguó) is a Chinese reality television series. Based on the American reality TV series, The Amazing Race, it features 10 teams of two, each with a pre-existing relationship, in a race across 11 cities in China to win a world tour provided by Travelzen.[2][3] The host of the show is Allan Wu.[3][4]

It is the third Asian version of the franchise. The first two were The Amazing Race Asia and HaMerotz LaMillion.

Australian and USA Flirtatious Friends Charlie Gale & Rachel Chen were the winners of the race.

In this version, instead of flipping an hourglass, teams that have been forced to Yield must wait until a spiral of incense has finished burning, which takes 15 minutes. This is the first race from any franchise to have three non-elimination legs in a row. The American and Asian editions have never had more than two in a row. This was also the first version to not offer any Fast Forward clues (leg 7 of season 14 had a Fast Forward clue that was not aired and no Fast Forward was shown in season 18 either).

Episode 2 which scheduled to air on August 15, 2010 was delayed to subsequent week due to National Mourning Day in China for Gansu mudslide victims.[8]

The following teams participated in the Race, with their relationships at the time of filming. Note this table does not necessarily reflect all content broadcast on television due to inclusion or exclusion of some data. Placements are listed in finishing order.

The prize for each leg is awarded to the first place team for that leg. All trips are sponsored by TravelZen. 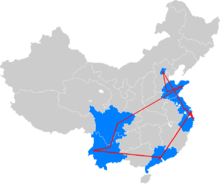 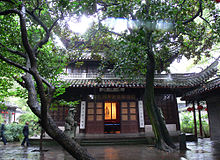 Tianyi Chamber was visited on the first leg of The Amazing Race: China Rush.

In the first Roadblock of the race, one team member had to eat a turtle, leaving nothing but the shell.

The Lingshan "Five-signets" Palace was the second pitstop in The Amazing Race China Rush.

In the second Roadblock of the race, one team member had to match 1 brick with 1000 different bricks, matching the one which they chose. In this leg's Detour, teams chose between Warriors Strength and Warriors Skill. In Warriors Strength, that team must take a boat to an island and perform a ladder climb and rappelling from other side to receive their next clue. In Warriors Skill, that team must hit a bulleye using spears and arrows from the distance of 10m to receive their clue. For this leg's Speedbump, Paul & Francis had to each make a clay tea cup in order to continue on the race.

Teams traveled to the city of Changzhou for this leg of the race.

In this leg's Detour, teams chose between Rock and Roll. In Rock, teams took a boat across a lake and climbed to the top of the climbing wall to receive their next clue. In Roll, teams located a bicycle cart with a skateboard. One team member then had to take control of the bicycle and cycle around the park to the skating park while the other rode on the skateboard. Once at the skating park, they will receive their next clue. For this leg's Roadblock, one team member had to navigate a boat through currents to the other side of the jetty, retrieve a flag and return the boat back in order to receive the next clue.

Teams visited Runyang Bridge in this leg of the race.

Bird's Nest was the location for this leg Detour. 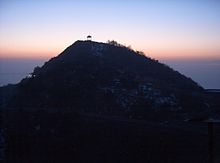 Teams performed the last part of the leg on Mount Tai.

Teams traveled by motorboat from the Zhanqiao Pier to the Pit Stop. 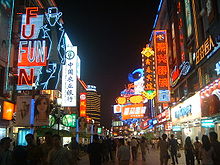 Chunxi street was the 8th pit stop for The Amazing Race: China Rush.

In this Detour, teams must choose between Hot Pot or Tea Pot. In Hot Pot, teams travel to the Hot Pot Restaurant. Then, teams will have to eat a family-sized serving of meat, cocoa and lettuce, which has been dipped in Sichuan's famous fiery Hot Pot soup. In addition, they will have to eat a side serving of diced red peppers. Finally, they would have to find a Face-Changer to receive their next clue. In Tea Pot, teams will travel to a historic part of the area and then, with the assistance of two tea masters, they must use ancient tea pots to properly pour tea into 7 teacups per team member. The tea pots have long spouts and are fairly difficult to use. In the Speed Bump, Karen & Lisa were required to both have their ears cleaned using traditional ear cleaning tools, which are, in essence, pieces of cotton on sticks of wire. In the Roadblock, one team member would have to search the entire 24-acre area of the Du Fu Cottage to find a scroll. No lights would be turned on, and the teams could only use a single flashlight.

In this leg's roadblock, one member must feed some pandas.

In this leg's Roadblock, one team member would have to wash 10kg of Bamboo leaves to clean it and then bring it all to the panda feeding area. Should any of the leaves drop to the ground along the way, teams would have to start the entire task over again. In the Speed Bump, Deepak and Naresh had to learn and recite a song about Dujiangyan. In this Detour, teams had to choose between Face Detection or Face Detention. In Face Detection, teams would receive a partial picture of a child's face. They then had to find the child in the picture in one of the classrooms. They then had to take the child to the headmaster's office. In Face Detention, teams will receive a sentence written in Chinese and they must copy the sentence 50 times onto a blackboard without making any errors. Should an error be made, the entire task would have to be restarted. 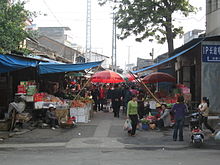 Tengchong, Yunnan was visited during the leg of the race.

In the Roadblock, one team member had to play Wetland Golf. They would pick up a club and some Tennis Balls and hit them towards the hole. If all of the tennis balls landed in the water, they had to retrieve them and try again, but if they could get at least one to land on the island with the hole, they would receive their next clue. In the Speed Bump, Charlie & Rachel had to help a local farmer and use two Water Buffalo to plow a field. They had to complete three laps. The Detour was a choice between Fish and Float. In Fish, teams had to catch two fish in a rice paddy with their bare hands. in Float, teams will be given some bamboo and rope and must build a raft. They must then paddle it across Wild Duck Lake. If it does not sink, they will receive their next clue. 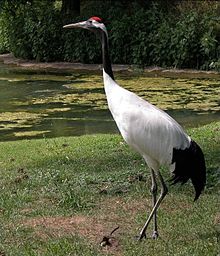 One of the detour task of this leg of the race is to herd Red-crowned cranes.

In the Roadblock, one team member would have to rappel down a large waterfall. They would then have to swim to a small platform with their next clue. The Detour was a choice between Crags and Cranes. In Crags, teams made their way to an ancient cave. They would find tablets with numbers and Chinese characters. The Chinese characters would translate to an island in the park that contained 500 statues. Teams would have to use the numbers to find the correct statue to find their next clue. In Cranes, teams had to find another island in the park dedicated to the protection of the Red-crowned Crane. They would then have to herd 7 cranes into a pen. 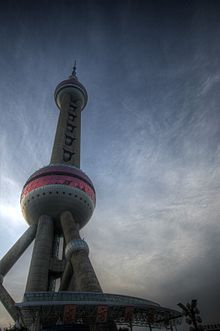 The Oriental Pearl Tower was the finish line of the first season of The Amazing Race: China Rush

The Roadblock was for one team member to climb to the top of a giant metal wheel to find their next clue. They must then rappel back down to the ground.