Map of the path of the C&O Canal.

The Chesapeake and Ohio Canal, abbreviated as the C&O Canal, and occasionally referred to as the "Grand Old Ditch,"[by whom?] operated from 1831 until 1924 parallel to the Potomac River in Maryland from Cumberland, Maryland to Washington, D.C. The total length of the canal is about 184.5 miles (296.9 km). The elevation change of 605 ft (184 m) was accommodated with 74 canal locks. To enable the canal to cross relatively small streams, over 150 culverts were built. The crossing of major streams required the construction of 11 aqueducts (10 of which remain). The canal also extends through the 3,118 ft (950 m) Paw Paw Tunnel. The principal cargo was coal from the Allegheny Mountains. The canal way is now maintained as a park, with a linear trail following the old towpath, the Chesapeake and Ohio Canal National Historical Park.

After the American Revolutionary War, George Washington was the chief advocate of using waterways to connect the Eastern Seaboard to the Great Lakes and the Ohio River.[1] Washington founded the Potowmack Company in 1785 to make navigability improvements to the Potomac River. The Patowmack Company built a number of skirting canals around the major falls including the Patowmack Canal in Virginia. When completed, it allowed boats and rafts to float downstream towards Georgetown. Going upstream was a bit harder. Slim boats could be slowly poled upriver. The completion of the Erie Canal worried southern traders that their business might be threatened by the northern canal; plans for a canal linking the Ohio and Chesapeake were drawn up as early as 1820. 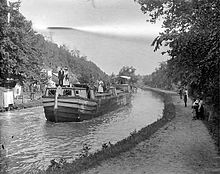 In 1824, the holdings of the Patowmack Company were ceded to the Chesapeake and Ohio Company. Benjamin Wright, formerly Chief Engineer of the Erie Canal, was named Chief Engineer of this new effort, and construction began with a groundbreaking ceremony on July 4, 1828 by President John Quincy Adams.

The narrow strip of available land along the Potomac River from Point of Rocks to Harpers Ferry caused a legal battle between the C&O Canal and the Baltimore and Ohio Railroad (B&O) in 1828 as both sought to exclude the other from its use.[2] Following a Maryland state court battle involving Daniel Webster and Roger B. Taney, the companies later compromised to allow the sharing of the right of way.[2]

The canal initially connected to the Potomac River on the east side of Georgetown by joining Rock Creek east of Lock 1, 0.3 miles (0.5 km) upstream of the Tidewater Lock, whose remnants still exist to the west of the mouth of the creek.[3][4] In 1831 the first section opened from Georgetown to Seneca, Maryland.[5] In 1833 the canal opened to Harpers Ferry, and at the Georgetown end it was extended 1.5 miles (2.4 km) eastward to Tiber Creek, near the western terminus of the Washington City Canal.[6][7][8] A lock keeper's house at the eastern end of this "Washington Branch" of the C&O Canal remains at the southwest corner of Constitution Avenue and 17th Street, N.W., at the edge of the National Mall in Washington, D.C.[9][10] 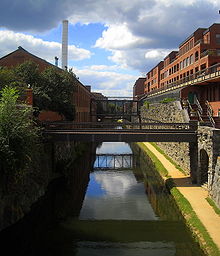 C&O Canal in the Georgetown neighborhood of Washington, D.C.

In 1836, the canal was used as a Star Route for the carriage of mails from Georgetown to Shepherdstown using canal packets. The contract was held by Albert Humrickhouse at $1,000 per annum for a daily service of 72 book miles. The canal approached Hancock, Maryland by 1839.[5] In 1843, the Potomac Aqueduct Bridge was constructed near the present-day Francis Scott Key Bridge to connect the Chesapeake and Ohio Canal to the Alexandria Canal which led to Alexandria, Virginia.[11] By the time the canal reached Cumberland in 1850, it had already been rendered obsolete; the B&O Railroad had reached Cumberland eight years previously.[12] Debt-ridden, the company dropped its plan to continue construction of the next 180 miles (290 km) of the canal into the Ohio valley.[13]

In the 1870s, a canal inclined plane was built two miles (3 km) upriver from Georgetown, so that boats whose destination was downriver from Washington could bypass the congestion in Georgetown.[14] The inclined plane was dismantled after a major flood in 1889 when ownership of the canal transferred to the B&O Railroad, which operated the canal to prevent its right of way (particularly at Point of Rocks) from falling into the hands of the Western Maryland Railway.[2] Operations ceased in 1924 after another flood damaged the canal.

The planned C&O Canal route to navigable waters of the Mississippi watershed would have followed the North Branch Potomac River west from Cumberland to the Savage River. Via the Savage, the canal would have crossed the Eastern Continental Divide at the gap between the Savage and Backbone Mountains near where present day O'Brien Road intersects Maryland Route 495, then via the valley of present day Deep Creek Lake, followed the Youghiogheny River to navigable waters.[citation needed] 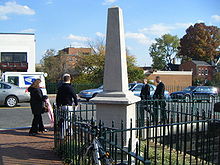 In 1938 the abandoned canal was obtained from the B&O by the United States in exchange for a loan from the federal Reconstruction Finance Corporation.[2] The government planned to restore it as a recreation area. Although the lower 22 miles (35 km) of the canal were repaired and rewatered, the project was halted when the United States entered World War II and resources were needed elsewhere. After the war, Congress expressed interest in developing the canal and towpath as a parkway. However, the idea of turning the canal over to automobiles was opposed by some, including United States Supreme Court Associate Justice William O. Douglas. In March 1954, Douglas led an eight-day hike of the towpath from Cumberland to D.C.[2] Although 58 people participated in one part of the hike or another, only nine men, including Douglas, hiked the full 184.5 miles (297 km). Popular response to and press coverage of the hike turned the tide against the parkway idea and, on January 8, 1971, the canal was designated a National Historical Park.

Presently the park includes nearly 20,000 acres (80 km²) and receives over 3 million recorded visits each year. Flooding continues to threaten historical structures on the canal and attempts at restoration. The Park Service has re-watered portions of the canal, but the majority of the canal does not have water in it.

Today the park is a popular getaway for Washington residents. The towpath is popular with bikers and joggers. Fishing and boating are popular in the re-watered portions, and whitewater kayakers tackling the world class rapids of the Potomac sometimes use the canal to shuttle upstream. The park offers rides on two reproduction canal boats, the Georgetown and the Charles F. Mercer, during the spring, summer and autumn. The boats are pulled by mules and park rangers in historical dress work the locks and boat while presenting a historical program.

To build the canal, the C&O Canal Company utilized a total of 74 lift locks that raised the canal from sea level at Georgetown to 610 feet (190 m) at Cumberland.[13] Eleven stone aqueducts were built to carry the canal over the Potomac's tributaries. In addition, seven dams were built to supply water to the canal, waste weirs to control water flow, and 200 culverts to carry roads and streams underneath the canal. An assortment of lockhouses, bridges, and stop gates were also constructed along the canal's path.[13]

One of the most impressive engineering features of the canal is the Paw Paw Tunnel, which runs for 3,118 feet (950 m) under a mountain.[13] Built to save six miles (10 km) of construction around the obstacle, the 3/4-mile tunnel used over six million bricks. The tunnel took almost twelve years to build; in the end, the tunnel was only wide enough for single lane traffic.[15]