$5.6 million was found hidden in this ceiling compartment of a truck during a seizure.

An urban legend that states most U.S. banknotes have traces of cocaine on them,[1] and is in fact accurate. In 1994, the U.S. 9th Circuit Court of Appeals determined that in Los Angeles, out of every four banknotes, on average more than three are tainted by cocaine or another illicit drug.[2][3]

Additionally, paper money in other parts of the world show a similar drug contamination, and studies indicate that they might even serve as a vector of disease, though researchers disagree over how easily diseases are transmitted this way. 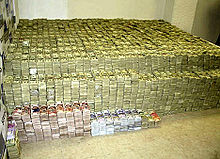 Part of a $207 million seizure of drug money

Several theories have been suggested to explain this contamination beyond the predictable contamination due to handling during drug deals and the use of rolled up notes for snorting drugs. After the initial contamination, the substance is "infected to" other notes in close contact, often stacked together, in enclosed environments common in financial institution.

In a study reported in Forensic Science International, A.J. Jenkins, at the Office of the Cuyahoga County Coroner (Cleveland, OH), the author reports the analysis of ten randomly collected one-dollar bills from five cities, and tested for cocaine, heroin, 6-acetylmorphine (also called "6-AM"), morphine, codeine, methamphetamine, amphetamine and phencyclidine (PCP). Bills were then immersed in acetonitrile for two hours prior to extraction and subjected to Gas chromatography-mass spectrometry (GC-MS) analysis. Results demonstrated that "92% of the bills were positive for cocaine with a mean amount of 28.75+/-139.07 micrograms per bill, a median of 1.37 μg per bill, and a range of 0.01-922.72 μg per bill. Heroin was detected in seven bills in amounts ranging from 0.03 to 168.5 μg per bill: 6-AM and morphine were detected in three bills; methamphetamine and amphetamine in three and one bills, respectively, and PCP was detected in two bills in amounts of 0.78 and 1.87 μg per bill. Codeine was not detected in any of the one-dollar bills analyzed". The study confirmed that although paper currency was most often contaminated with cocaine, other drugs of abuse may also be detected in bills.[4]

Another study, conducted at Argonne National Laboratory, found that four out of five dollar bills in Chicago suburbs contain traces of cocaine. Previous studies have found similar contamination rates in other cities. But the Argonne study is the first to demonstrate that if you handle contaminated bills, you won't wind up with drugs on your hands. "It's virtually impossible for cocaine to rub off", Argonne chemist Jack Demirgian said.[5] This estimate of contamination could be as high as 94%, according to Bill and Rich Sones of the Chicago Sun-Times.[6]

This was confirmed by Ronald K. Siegel in his book, Intoxication: Life in Pursuit of Artificial Paradise,[7] who noted the figure as well.

It was uncovered in the Sacramento Bee that while the initial source of the contamination comes from money used in the Illegal drug trade in circulation, the U.S. Federal Reserve unwittingly spreads the substance to clean currency by mixing the notes together.[8] The Journal of Analytical Toxicology confirms this assessment, noting that counting machines (in addition to simple proximity) are the agents of transfer.[9]

The discovery that cocaine is so prevalent in U.S. banknotes has a legal application that reactions by drug-sniffing dogs is not immediately cause for arrest of persons or confiscation of banknotes. (The drug content is too low for prosecution but not too low to trigger response to drug-sniffing dogs.),[10] though this has been contested legally in a number of U.S. states[11] as a standard of what constitutes 'unusual' levels of contamination remains to be achieved (see below).

In the United Kingdom

Forensic scientists have said that around 80% of all British banknotes contain traces of drugs.[12] A 1999 study found even higher levels of contamination in the London area; of 500 notes tested, only four had no traces of cocaine.[13] Most of the banknotes showed only low levels of contamination, suggesting they had merely been in contact with contaminated notes, but 4% of the notes in the study showed higher levels, which the researchers suggested was the result of either being handled by people under the influence of cocaine (which is excreted in skin oils), or by being used directly to snort the drug.[13]

There are drug levels above which banknotes need to be taken out of circulation, and over £15 million worth of notes are destroyed annually for this reason. The destruction is more often done as a precaution than because the money poses a serious health hazard.[12]

Cocaine is the drug most commonly found on banknotes. Heroin and ecstasy are found less often, though the frequency of ecstasy contamination rose in the years leading up to 2002.[12] Joe Reevy of Mass Spec Analytical, a company which analyses confiscated banknotes for the police, pointed out that heroin and ecstasy degrade more rapidly than cocaine, and that a single note which had been used to snort cocaine could subsequently contaminate many others when placed in a sorting machine, to explain the frequency of cocaine contamination.[12]

Money recovered from police raids on the drugs trade are often heavily contaminated. In one raid in 2002, £465,000 was found which had been stored in a room where heroin was being prepared, and was so heavily contaminated that officers were advised not to touch it without protective equipment, while during Operation Uproar, an investigation into Colombian money laundering, $1 million in contaminated banknotes was destroyed after being seized.[12]

Prior studies[14] found that the level of contamination - i.e., the concentration of the contaminants - was different between those notes suspected to be used in the drug trade and those of proximity transfer levels. Subsequent tests have confirmed this determination, and serve as the basis for court cases against drug dealers, since the basic level of drug contamination remains fairly constant throughout the UK, despite factors that might immediately be thought to affect levels, like rural or urban environments, rich or poor or areas with high or low crime rates.[15]

The Contamination of paper money is not limited to simply that of cocaine and other illicit drugs. Health officials in the UK warn that a silent Hepatitis-C epidemic could be brewing. Drug users with hepatitis who share with others the rolled paper note (or straw) used to snort cocaine can facilitate the transfer of the disease to thousands. As drug users are frequently impaired, they can easily fail to notice small traces of blood on these rolled banknotes.[16] This is considered to be of particular concern, as eight out of ten carriers are unaware of their status (as hepatitis can lie dormant for decades), and have little in the way of access to regular healthcare .[17] This higher risk for contracting hepatitis-C has also been noted by the American National Institutes of Health (NIH).[18][19] Without treatment, hepatitis-C can lead to chronic liver disease.

The British Department of Health estimates that there are over 200,000 people infected with hepatitis C in Britain, but the number might be much higher.[20] Charles Gore, the chief executive of the Hepatitis C Trust, said: "Estimates show that around 5,000 new cases of hepatitis C are diagnosed every year - but they are mainly through chance. Because so many are undiagnosed we can't tell what kind of problem we are looking at. When 5,000 banknotes were tested in London in 2000, 99% of them had traces of cocaine on them. That tells us that there is potentially a massive problem in diagnosis and people's awareness of how easily hepatitis C can be contracted."[16]

Professor Graham Foster, of St Mary's Hospital, London, said: "Sharing banknotes or straws is a significant risk factor that people need to be more aware of. Although the risk of contracting hepatitis C through snorting is lower than through sharing a needle, it is still there."[16]

Similar contaminations have been found on euro banknotes from Ireland,[21] Spain,[22] and Germany.[23] Additionally, Germany had noted the unusual occurrences of German euros cracking and disintegrating after being withdrawn from ATMs,[24] later explained as being caused by the sulfates used in the production of methamphetamine mixing with human sweat to form sulfuric acid, which breaks down the paper the euros are printed on.[25] Most of the crystal methamphetamine present in Germany comes from Eastern Europe, and has a high level of sulfates.

Elsewhere in the world

The longevity of most modern currency has also given rise to various fallacies regarding the transmission of bacteriological agents with paper banknotes. SARS cannot be spread via banknote, any more than AIDS can - though it bears noting that China’s concern in early 2003 that the deadly SARS virus could be spread by banknotes caused that country to automatically sequester surrendered notes for 24 hours (the presumed lifespan of the virus) before releasing them back into circulation.[26]

The levels of contamination and the overall "dirtyness" of bills led Australia to introduce a plastic currency in 1988. These notes are less prone to contamination due to lack of the fabric that can hold crystalline structures that illicit drugs often take.[10] Australia now prints polymer currency for almost two dozen other countries, including Israel, Malaysia, Mexico and Romania, as well as at home.