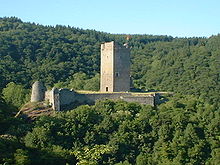 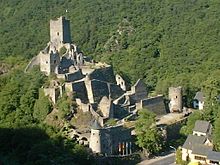 Manderscheid (in Eifel dialect: Maanischd) is a town in the Bernkastel-Wittlich district in Rhineland-Palatinate, Germany. It is the seat of the like-named Verbandsgemeinde, and also both a climatic spa and a Kneipp spa.

The town lies in the South Eifel between the rivers Lieser in the east and Kleine Kyll in the west. Northeast of Manderscheid lies the Bleckhausen Juniper Conservation Area, the biggest of its kind in the whole Eifel.

If, as can be presumed, the first part of the placename Manderscheid comes from the Celtic word mantara (“jaw”), then this may be said to be evidence that the Manderscheid area was already settled very early on. Near Schwarzenborn, several Stone Age settlements have been found. Further, it is also known that on the road from Steineberg to Demerath (near Mehren), so many graves from Hallstatt times with many jewelled objects and tools have been unearthed that one might almost speak of a “Mehren culture”. Near Wallscheid, graves from Hallstatt and La Tène times have been found, too, and likewise near Laufeld. Near Wallscheid, two iron arrowheads that come from this era and a bronze vessel were found.

More numerous have been the finds from Roman times. Besides the “Villa of Manderscheid”, which was unearthed in 1863 at the foot of the Mosenberg (mountain), Roman finds come to light in almost every town and village in the surrounding area.

Besides the Viergötterstein (a “four-god stone”, a pedestal on which a Jupiter Column was customarily stood), special attention is earned by two altars from Großlittgen that were found in Pantenburg in 1920. They were dedicated to the god Vovotius and the goddesses Boudina and Alauna and might have belonged to a Gallo-Roman spring sanctum.

This may make it clear that a great many settlements in the surrounding area arose as early as Roman times.

Rarer are finds from Frankish times, as they are almost everywhere.

In Pantenburg a lance, a spear and a shield were found, and in Eckfeld a sword and a ventail.

Despite the dearth of finds from this time, it can be assumed that there was considerably more settlement, and that most of today’s population centres arose in that time, as witnessed by places with names ending in —scheid, —feld or —ingen. Thus, Officinus Villa (now Öfflingen) was mentioned in 794 and 895, Manderscheid and Eckiveld (Eckfeld) in 973, and Louvenvelt (Laufeld) in 1161.

Manderscheid, known in the Middle Ages as Manderschiet, had its first documentary mention in 973. From the mid 12th century it belonged to the Archbishopric of Trier. Elector Balduin granted it town rights in 1332. Manderscheid was the seat of an Electoral-Trier Amt and at the same time also of the Counts of Manderscheid. Beginning in 1794, Manderscheid lay under French rule. In 1814 it was assigned to the Kingdom of Prussia at the Congress of Vienna. Since 1947, it has been part of the then newly founded state of Rhineland-Palatinate. The building of the former Electoral Kellnerei (a ministerial administrative establishment) today houses the seat of the Manderscheid Verbandsgemeinde administration.

The Luziakirche (“Lucia’s Church”), also known as Luciakapelle (“Lucia’s Chapel”) – presumably the town’s first church – stood in the Middle Ages on Manderscheid’s northern outskirts. In 1386, Lucia von Manderscheid, Heinrich von Manderscheid’s wife, was entombed there. About 1794, the chapel was burnt down by the French. The former location is now forsaken, that is to say, no remnants of the chapel are on hand anymore. Only a street name recalls its existence. From the Luciakapelle comes the image of the Sorrowful Mother, which is today found in Saint Hubert’s Parish Church (Pfarrkirche St. Hubertus). The pietà come from the time about 1600; when it underwent restoration in the 1960s, traces of burning were still in evidence.

On 7 June 1969, the municipality of Niedermanderscheid, until this time self-administering, was amalgamated with Manderscheid. Since 16 January 1998, Manderscheid has been a town.

The council is made up of 16 council members, who were elected at the municipal election held on 7 June 2009, and the honorary mayor as chairman.

The municipal election held on 7 June 2009 yielded the following results[2]:

The mayor is Günter Krämer (Forum).

The town’s arms might be described thus: Or a fess dancetty gules, the shield ensigned with a crown of the field.

Well known are Manderscheid’s two castles, the Oberburg and the Niederburg. Also interesting to tourists are the gem grinding shop, the local history museum and the Maarmuseum (about the Eifel’s maars). Manderscheid lies on the river Lieser, which can be followed along the Eifelverein hiking club’s Lieserpfad (hiking trail – Pfad means “path” in German) to Daun or Wittlich. Moreover, the 330 km-long “premium” hiking trail, the Eifelsteig, leads through Manderscheid on its way from Aachen to Trier.

The traditional local speech is among the Moselle Franconian dialects. Besides some words that are not found in standard High German, there are the following peculiarities:

Until the mid 19th century, the Manderscheider Maß was the name given a standard dry measure in gristmills along the Lieser, Salm and Kleine Kyll (one was equal to 221.15 L). The so-called Malter-Maß was not the same everywhere, but rather varied regionally. The Manderscheider Maß was decreed in a Mühlenordnung (“mill order”) on 20 October 1736 by Prince-Archbishop-Elector Franz-Georg, and was valid for the whole of the Electorate of Trier.

Manderscheid lies on the Autobahn A 1.