Milton-Freewater is a city in Umatilla County, Oregon, United States. The city received its current name in 1951 when the neighboring rival cities of Milton and Freewater voted to merge. The population was 6,470 at the 2000 census. It is part of the Pendleton–Hermiston Micropolitan Statistical Area.

Originally called Freeport, when the construction of a mill was proposed about 1868, the community changed its name to Milltown, which became Milton by 1873.

Freewater, although named New Walla Walla on its original plat filed in 1889, received its name from the offer of free water extended to new settlers. This town was located to the north of Milton.

In the 1960s, Milton-Freewater billed itself as the pea capital of the world. They had a yearly festival and parade known as the "Pea Festival". In the late 1970s, agriculture practices and crop prices changed the dynamics of the local economy and peas were no longer grown as abundantly as they once were. The town dropped the title and the celebration. At the time, Milton-Freewater had a popular festival called the "Corn Roast" (started by local resident Thomas Dodd when he was Chamber President in the early 1970s) that took place in August, and the decision was made to increase the festival to a weekend long celebration which eventually became known as "Muddy Frogwater Days". The city had long been referred to as "Muddy-Frogwater" by the locals, so some enterprising individuals decided to capitalize on that theme and hence Muddy Frogwater Days were born. Muddy Frogwater is now an annual festival that runs in August. The festival brings in all visitors from even Walla Walla, Weston, Athena and even Pendleton. The festival is a good way for business promotion as many booths and vendors are local companies in the area. Some activities in the past have included concerts, karaoke, a train ride for small children, roasted corn feed, and a dance in the evening. On the Sunday morning of the festival there is a church service.[3] Since then the town has been firmly committed to marketing itself to business and tourism as a "fun town" able to laugh at itself and the quirky nickname. Unfortunately, since it is indeed a small town with limited infrastructure, the city has lost most of its business to Walla Walla, Washington just to the north.[citation needed] 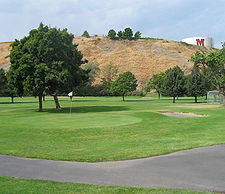 There were 2,237 households out of which 36.0% had children under the age of 18 living with them, 51.5% were married couples living together, 12.7% had a female householder with no husband present, and 31.4% were non-families. 25.8% of all households were made up of individuals and 12.7% had someone living alone who was 65 years of age or older. The average household size was 2.77 and the average family size was 3.31. 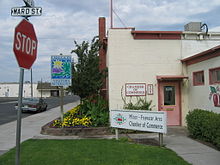 Schools in Milton-Freewater are under the jurisdiction of the Milton-Freewater Unified School District and include McLoughlin High School, Central Middle School, Freewater Elementary, Ferndale Elementary School, Grove Elementary School, and Pleasant View School. The high school is also called "Mac-Hi" by locals. Mac-Hi has many sports to choose from including football, soccer, volleyball, wrestling, basketball, track, baseball, softball, golf, and tennis. In previous years, the boys soccer team have won the state championship a number of times. The school also has a very strong wrestling team and many members have gone on to the district and state tournament. Currently, there are about four hundred students who attend Mac-Hi.