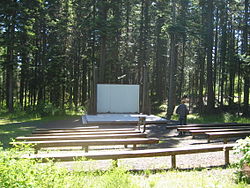 Outdoor amphitheater of the Oregon Trail Interpretive Center in the Blue Mountains forest within the Emigrant Springs State Heritage Area in Meacham.[1]

Meacham is an unincorporated community in Umatilla County, Oregon, United States. It is located on the old alignment of U.S. Route 30 off Interstate 84, in the Umatilla National Forest, near Emigrant Springs State Heritage Area and the route of the Oregon Trail. It is part of the Pendleton–Hermiston Micropolitan Statistical Area.

Meacham was a station on the Union Pacific Railroad, near the summit of the Blue Mountains. Major Henry A. G. Lee established a troop encampment, called Lee's Encampment, there in 1844. Meacham was named for Harvey J. and Alfred B. Meacham, who operated Meacham Station, a stage station, in the 1860s and '70s. The first post office in the locality, established in 1862, was named "Encampment". The name was changed to "Meacham" in 1890.[2][3]

President Warren G. Harding gave a speech in Meacham on July 4, 1923 commemorating the Oregon Trail. At the time his wife was presented with a Pendleton blanket shawl in a design that became popular as the "Harding design".[4][5]