Automatic Train Control (ATC) is a train protection system for railways, ensuring the safe and smooth operation of trains on ATC-enabled lines. Its main advantages include making possible the use of cab signalling instead of track-side signals and the use of smooth deceleration patterns in lieu of the rigid stops encountered with the older ATS technology. ATC can also be used with Automatic Train Operation (ATO). There are several implementations and versions of ATC and each is different.

It is especially common in Japan, where ATC is used on all Shinkansen (bullet train) lines. In Japan, ATC has been introduced on various lines as a replacement for ATS.

ATC around the world

In 1906, the Great Western Railway in the UK developed a system known as "Automatic Train Control". In accordance with modern terminology, GWR ATC is classified as an Automatic Warning System (AWS). This was an intermittent train protection system that relied on an electrically energised (or unenergised) rail between, and higher than, the running rails. This rail sloped at each end and was known as an ATC ramp and would make contact with a shoe on the underside of the passing locomotive.

The ramps were provided at Distant signals. A development of the design, intended for use at Stop signals, was never implemented.

If the signal associated with the ramp was at Caution, the ramp would not be energised. The ramp would lift the shoe on the passing locomotive and start a timer sequence at the same time sounding a horn on the footplate. If the driver failed to acknowledge this warning within a preset time, the brakes of the train would be applied. In testing, the GWR demonstrated the effectiveness of this system by sending an express train at full speed past a distant signal at Caution. The train was brought safely to a stand before reaching the home signal.

If the signal associated with the ramp was Clear, the ramp was energised. The energized ramp would lift the shoe on the passing locomotive and cause a bell to sound on the footplate.

If the system were to fail then the shoe would remain unenergised, the caution state; it therefore failed safe, a fundamental requirement of all safety equipment.[1]

The system was implemented on all GWRs main lines including Paddington to Reading by 1908.[1]. The system remained in use until the 1970s, when it was superseded by the British Rail AWS. 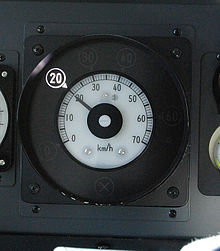 Actually the first implementation of ATC in Japan, it was first used on Tokyo Metro Hibiya Line (together with ATO) in 1961 and later on the Tokyo Metro Tōzai Line. Stands for Wayside-ATC. Both lines converted to New CS-ATC (ATC-10) in 2003 and 2007 respectively. WS-ATC is also used on Osaka Municipal Subway lines excluding the Sennichimae Line, the Sakaisuji Line, the Nagahori Tsurumi-ryokuchi Line and the Imazatosuji Line.

First used on the Tokyo Metro Chiyoda Line (interoperating with the JR East Jōban Line) in 1971, CS-ATC (which stands for Cab Signalling-ATC), was an analogue ATC technology using ground-based control, and, like all ATC systems, used cab signalling. CS-ATC uses trackside speed limits of 0, 25, 40, 55, 75 and 90 km/h.

Used on the Chikuhi Line (through service with Fukuoka City Subway Kūkō Line) in Kyushu. 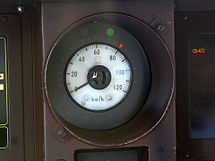 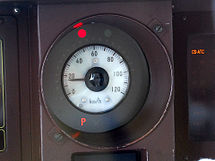 The said ATC-10 indicator with ORP (Over Run Protector) engaged near the end of the ATC coverage area.

Used on the Kaikyō Line (inclusive of the Seikan Tunnel section) along with Automatic Train Stop since 1988.

Digital ATC is a digitized form of Automatic Train Control in use on a few JR lines in Japan.

The following forms of Digital ATC are in existence. 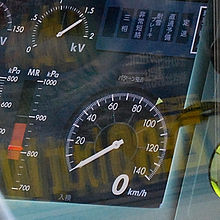 Used on non-high speed lines on some East Japan Railway Company (JR East) lines. Stands for Digital ATC. Its main difference from the older analog ATC technology is the shift from ground-based control to train-based control, allowing braking to reflect each train's ability, and improving comfort and safety. The fact that it can also increase speeds and provide for denser timetables is important for Japan's busy railways.

First D-ATC was enabled on the section of track from Tsurumi Station to Minami-Urawa Station on the Keihin-Tohoku Line on 21 December 2003 following the conversion of the 209 series trains there to support D-ATC.

The Yamanote Line was also D-ATC enabled in April 2005, following the replacement of all old 205 series rolling stock to the new, D-ATC enabled E231 series trains.

There are plans to D-ATC enable the rest of the Keihin-Tohoku line and the Negishi line, pending conversion of onboard and ground-based systems.

The ATC system on the Toei Shinjuku Line in use from 14 May 2005 is very similar to D-ATC.

First used on the Tōkaidō Shinkansen since 2006, ATC-NS (which stands for New ATC System), is a digital ATC system based on DS-ATC. Also used on the Taiwan High Speed Railway. Currently there are plans to reequip the Sanyō Shinkansen with ATC-NS as a replacement for ATC-1B.

ATC in the United States

ATC systems in the United States are almost always integrated with existing continuous cab signalling systems. The ATC comes from electronics in the locomotive that implement some form of speed control based on the inputs of the cab signalling system. If the train speed exceeds the maximum speed allowed for that portion of track, an overspeed alarm sounds in the cab. If the driver fails to reduce speed and/or make a brake application to reduce speed a penalty brake application is made automatically. Due to the more sensitive train control issues with freight trains, ATC is almost exclusively applied to passenger locomotives in both inter-city and commuter service with freight trains making use of cab signals without speed control. Some high-volume passenger railroads such as Amtrak, Metro North and the Long Island Rail Road require the use of speed control on freight trains that run on all or part of their systems.

While cab signalling and speed control technology has existed since the 1920s, adoption of ATC only became an issue after a number of serious accidents several decades later. The Long Island Rail Road implemented its Automatic Speed Control system within its cab signalled territory in the 1950s after a pair of deadly accidents caused by ignored signals. After the Newark Bay Lift Bridge Disaster the state of New Jersey legislated use of speed control on all major passenger train operators within the State. While speed control is currently used on many passenger lines in the United States, in most cases it has been adopted voluntarily by the train operating company.

In Sweden the introduction of ATC started in the 1980s together with high speed rail.[2]As of 2008, 9831 km out of the 11904 km of track maintained by the Swedish Rail Administration had ATC-2 installed.[3] The Norwegian National Rail Administration utilize the same system as well. Trains can generally cross the border without being specially modified.[4][5]

Denmark has a different system than its neighbours. The Danish system was used for the first time in 1986. The installed components on most tracks can't tolerate electrification, and will have to be replaced during an electrification. That is one reason why so few Danish railways are electrified. Some trains have both Danish and Swedish system (like the Oresundtrains and some X2000 trains), and some have both Danish and German system (like 10 of the ICE-TD trains).