Dennis Lehane (born August 4, 1965)[1] is an American author. He has written several award-winning novels, including A Drink Before the War and the New York Times bestseller Mystic River, which was later made into an Academy Award-winning film. Another novel, Gone, Baby, Gone, was also adapted into an Academy Award-nominated film. His novel Shutter Island was adapted into a film by Martin Scorsese in 2010. Lehane is a graduate of Florida International University in Miami, Florida.

Lehane was born and reared in the Dorchester neighborhood of Boston, Massachusetts, and continues to live in the Boston area, which provides the setting for most of his books. He spent summers on Fieldston Beach in Marshfield.[2] Lehane is the youngest of five children. His father was a foreman for Sears & Roebuck, and his mother worked in a Boston public school cafeteria.[3] Both of his parents emigrated from Ireland.[4] His brother, Gerry Lehane, who is two and a half years older than Dennis, is a veteran actor who trained at the Trinity Repertory Company in Providence before heading to New York in 1990. Gerry is currently a member of the Invisible City Theatre Company.[5]

He was previously married to Sheila Lawn, formerly an advocate for the elderly for the city of Boston but now working with the Suffolk County District Attorney's Office as an Assistant District Attorney.[6] Currently, he is married to Dr. Angela Bernardo,[7] with whom he has one daughter.[8][9]

He is a graduate of Boston College High School (a Boston Jesuit prep school),[4] Eckerd College (where he found his passion for writing), and the graduate program in creative writing at Florida International University in Miami, Florida. He occasionally makes guest appearances as himself in the ABC comedy/drama TV series Castle.

His first book, A Drink Before the War (1994), which introduced the recurring characters Patrick Kenzie and Angela Gennaro, won the 1995 Shamus Award for Best First P.I. Novel. The fourth book in the series, Gone, Baby, Gone, was adapted to a film of the same title in 2007; it was directed by Ben Affleck and starred Casey Affleck and Michelle Monaghan as Kenzie and Gennaro.[10] When commenting on the movie after receiving a sneak peek, Lehane commented that "I saw the movie and it's terrific, I wasn't gonna say anything if I didn't like it but it's really terrific."[11] Reportedly, Lehane "has never wanted to write the screenplays for the films [based on his own books], because he says he has 'no desire to operate on my own child.'"[2] 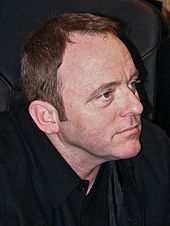 Lehane at a book signing in February 2009

Lehane's Mystic River was made into a film in 2003; also called Mystic River and directed by Clint Eastwood, it starred Sean Penn, Tim Robbins, and Kevin Bacon (Lehane can be briefly seen waving from a car in the parade scene at the end of the film). The novel itself was a finalist for the PEN/Winship Award and won the Anthony Award and the Barry Award for Best Novel, the Massachusetts Book Award in Fiction, and France's Prix Mystère de la Critique.

Lehane's first play, Coronado, debuted in New York in December 2005, produced by Invisible City Theater Company. The play had its regional premiere at American Stage in St. Petersburg in April 2006[12] and its Midwest premiere in the fall of 2007 with Steep Theatre Company in Chicago. Coronado is based on his acclaimed short story Until Gwen,[13] which was originally published in The Atlantic Monthly and was selected for both The Best American Short Stories and The Best Mystery Short Stories of 2005.[5]

Lehane described working on his historical novel, The Given Day,[14] as "a five- or six-year project" with the novel beginning in 1918 and encompassing the 1919 Boston Police Strike and its aftermath.[15] According to Lehane, "The strike changed everything....It had a big effect on the unionization movement, and Prohibition came on the heels of that, then Calvin Coolidge promising to break the unions. That's all linked to what's going on now.".[15] While Lehane's epic novel centers on the 1919 Boston police strike, it contains a national sweep and might be the first of a trilogy or perhaps a four-book series.[16] Lehane called the novel his "great white whale" and said that when he finally finished it, he would "either write a sequel—or take a break from the cops and return to Patrick and Angie."[11] The novel was published in October, 2008.[7]

On October 22, 2007 Paramount Pictures announced that they had optioned Shutter Island with Martin Scorsese attached as director.[17] The Laeta Kalogridis-scripted adaptation has Leonardo DiCaprio playing U.S. Marshal Teddy Daniels, "who is investigating the disappearance of a murderess who escaped from a hospital for the criminally insane and is presumed to be hiding on the remote Shutter Island."[18] Mark Ruffalo played opposite DiCaprio as U.S. Marshal Chuck Aule.[19] Production started in March 2008; Shutter Island was released on February 19, 2010.

In an interview with the Wall Street Journal on February 12, 2010, Lehane revealed that he was working on a sixth book in the Patrick Kenzie & Angela Gennaro series, his first in 11 years.[20] The book, titled Moonlight Mile, was released on November 2, 2010. 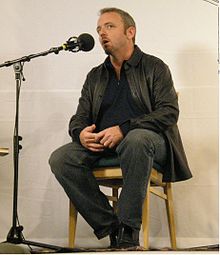 Since becoming a literary success after the broad appeal of his Kenzie and Gennaro novels, as well as the success of Mystic River (as both a movie and a novel), Lehane has taught at several colleges. He taught fiction writing and serves as a member of the board of directors for a low-residency MFA program sponsored by Pine Manor College in Chestnut Hill, Massachusetts.[21] He has also been involved with the Solstice Summer Writers' Conference at Boston's Pine Manor College and taught advanced fiction writing at Harvard University, where his classes quickly filled up.

In May 2005, Lehane was presented with an honorary Doctor of Humane Letters degree from Eckerd College and was appointed to Eckerd's Board of Trustees later that year. As of June 2006, he was living temporarily in St. Petersburg, Florida, and teaching as writer-in-residence at Eckerd (usually during the spring semester), where he also co-directs the Writers in Paradise conference each January.[22] In Spring 2009, Lehane became a Joseph E. Connor Award recipient and honorary brother of Phi Alpha Tau professional fraternity at Emerson College in Boston, MA. Phi Alpha Tau is the nation's first professional fraternity in the communicative arts. Other brothers and Connor Award recipients include Robert Frost, Elia Kazan, Jack Lemmon, Red Skelton, Edward R. Murrow, Yul Brynner, and Walter Cronkite.[23] Also in Spring 2009, Lehane presented the commencement speech at Emmanuel College in Boston, Massachusetts, and was awarded an honorary degree.[24]

Lehane wrote and directed an independent film called Neighborhoods in the mid 1990s. The film was said to be similar to Good Will Hunting given its setting in Boston's working class areas like Southie and Dorchester, even though production ended in 1996, more than a year before Good Will Hunting.

Lehane joined the writing staff of the HBO drama series The Wire for the third season in 2004.[25][26] Lehane wrote the teleplay for the episode "Dead Soldiers" from a story by series creator and executive producer David Simon.[27][28] Lehane made a cameo appearance in the third season episode "Middle Ground" as Sullivan, an officer in charge of special equipment.[29][30] Lehane has commented that he was impressed by the show's creators David Simon and Ed Burns' ear for authentic street slang.[31] Lehane returned as a writer for the fourth season in 2006 and wrote the teleplay for the episode "Refugees" from a story he co-wrote with producer Ed Burns.[32][33] Lehane and the writing staff won the Writers Guild of America (WGA) Award for Best Dramatic Series at the February 2008 ceremony and the 2007 Edgar Award for Best Television Feature/Mini-Series Teleplay for their work on the fourth season.[34][35] Lehane remained a writer for the fifth and final season in 2008 and wrote the episode "Clarifications".[36][37] Lehane and the writing staff were nominated for the WGA Award award for Best Dramatic Series again at the February 2009 ceremony for their work on the fifth season but Mad Men won the award.[38]

He served as an executive producer for Shutter Island.