Micrograph of a tubular adenoma, the most common type of dysplastic polyp in the colon. 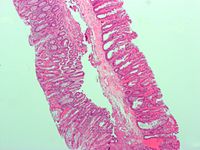 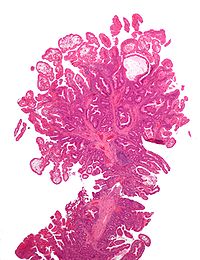 Micrograph of a Peutz-Jeghers colonic polyp - a type of hamartomatous polyp. H&E stain. 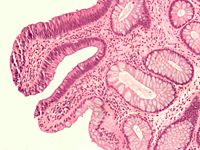 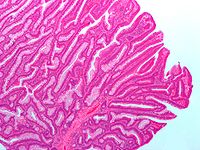 Micrograph of a villous adenoma. These polyps are considered to have a high risk of malignant transformation. H&E stain.

Colorectal polyps are often classified by their behaviour (i.e. benign vs. malignant) and/or etiology (e.g. as a consequence of inflammatory bowel disease). They may be benign (e.g. hyperplastic polyp), pre-malignant (e.g. tubular adenoma) or malignant (e.g. colorectal adenocarcinoma).

The most common general classification is:

Most hyperplastic polyps are found in the distal colon and rectum.[3] They have no malignant potential [3], which means that they are no more likely than normal tissue to eventually become a cancer.

Hyperplastic polyposis syndrome is a rare condition that has been defined by the World Health Organization as either:

A neoplasm is a tissue whose cells have lost its normal differentiation. They can be either benign growths or malignant growths. The malignant growths can either have primary or secondary causes.

Neoplastic polyps of the bowel are often benign hence called adenomas. An adenoma is tumor glandular tissue, that has not (yet) gained the properties of a cancer.

The common adenomas of the colon are the tubular, tubulovillous, villous, and sessile serrated (SSA).[3]

As is evident from their name, sessile serrated and traditional serrated adenomas (TSAs) have a serrated appearance and can be difficult to distinguish microscopically from hyperplastic polyps.[3] Making this distinction is important, however, since SSAs and TSAs have the potential to become cancers,[4] while hyperplastic polyps do not.[3]

The villous subdivision are associated with the highest malignant potential because they generally have the largest surface area. (This is because the villi are projections into the lumen and hence have a bigger surface area.) However, villous adenomas are no more likely than tubular or tubulovillous adenomas to become canerous if their sizes are all the same.[3]

They are growths, like tumours found in organs as a result of faulty development. They are normally made up of a mixture of tissues. They grow at the normal rate of the host tissue and rarely cause problems such as compression. A common example of a hamartomatous lesion is a strawberry naevus. Hamartomatous polyps are often found by chance; occurring in syndromes such as Peutz-Jegher Syndrome or Juvenile Polyposis Syndrome.

Peutz-Jeghers syndrome is associated with polyps of the GI tract and also increased pigmentation around the lips, genitalia, buccal mucosa feet and hands. People are often diagnosed with Peutz-Jegher after presenting at around the age of 9 with an intussusception. The polyps themselves carry little malignant potential but because of potential coexisting adenomas there is a 15% chance of colonic malignancy.

These are polyps which are associated with inflammatory conditions such as Ulcerative Colitis and Crohns disease.

Colorectal polyps are not usually associated with symptoms.[2] When they occur, symptoms include rectal bleeding, bloody stools, abdominal pain and fatigue.[2] A change in bowel habits may occur including constipation and diarrhoea.[5] Occasionally, if a polyp is big enough to cause a bowel obstruction, there may be nausea, vomiting and severe constipation.[5]

When does a polyp become a problem?

Malignant potential is associated with

Normally an adenoma which is greater than 0.5 cm is treated

Polyps can be removed during a colonoscopy or sigmoidoscopy using a wire loop that cuts the stalk of the polyp and cauterises it to prevent bleeding.[5] Many "defiant" polyps — large, flat, and otherwise laterally spreading adenomas — may be removed endoscopically by a technique called endoscopic mucosal resection (EMR), which involves injection of fluid underneath the lesion to lift it and thus enable facilitate surgical excision. These techniques may be employed as an alternative to a much-more-invasive colectomy.[6]

Polyps are either pedunculated (attached to the intestinal wall by a stalk) or sessile (grow directly from the wall).[7]