Den, also known as Hor-Den, Dewen and Udimu, is the Horus name of an early Egyptian king who ruled during the 1st dynasty. He is the best archaeologically attested ruler of this period. Den is said to have brought prosperity to his realm and numerous innovations are attributed to his reign. He was the first to use the title King of Lower- and Upper Egypt, and the first depicted as wearing the double crown (red and white). The floor of his tomb at Umm el-Qa'ab near Abydos is made of red and black granite, the first time in Egypt this hard stone was used as a building material. During his long reign he established many of the patterns of court ritual and royalty used by later rulers and he was held in high regard by his immediate successors.

The Greek historian Manetho called him “Oúsaphaîdos” and credited him with a reign of 20 years [1], whilst the Royal Canon of Turin is damaged and therefore unable to provide information about the duration of Den´s reign.[2] Egyptologists and historians generally consider that Den had a reign of 42 years. Their conclusion is based on inscriptions on the Palermo Stone.[3]

Cartouche name of Den in the Abydos King List

Den´s serekh name is well attested on earthen seal impressions, on ivory labels and in inscriptions on vessels made of schist, diorite and marble. The artifacts were found at Abydos, Sakkara and Abu Rawash.[4] Den´s name is also attested in later documents. For example, the Medical Papyrus of Berlin (ramesside era) discusses several methods of treatment and therapies for a number of different diseases. Some of these methods are said to originate from the reign of Den, but this statement may merely be trying to make the medical advice sound traditional and authoritative.[5] Similarly, Den is mentioned in the “Ani´s book of death” (also dated to ramesside times) in chapter 64.[6]

Den´s serekh name was “Den” or “Dewen”, most possibly meaning “he who brings the water”. This is consistent with his birth name, which was “Khasty”, meaning “he of the two deserts”. Egyptologists such as Toby Wilkinson and Francesco Tiradritti think that the birth name refers to the eastern and the western desert - both surrounding Egypt like protective shields - or to Lower and Upper Egypt. This is in accord with the introduction by Den of the Nisut-Bity-title. This royal title was designed to legitimise the ruler´s power over whole of Egypt.[7][8]

Den´s family has been the subject of significant research. His Mother was queen Meritneith; this conclusion is supported by contemporary seal impressions and by the inscription on the Palermo Stone. Den´s wives were the queens Semat, Nakht-Neith and -possibly- Qua-Neith. He had also numerous sons and daughters, his possible successors to his heirs could have been king Anedjib and king Semerkhet.[4][9]

Den´s royal court is also well researched. Subsidiary tombs and palatial mastabas at Sakkara belonged to high officials such as Ipka, Ankh-ka, Hemaka, Nebitka, Amka, Iny-ka and Ka-Za. In a subsidiary tomb at Den´s necropolis, the rare stela of a dwarf named Ser-Inpu was found.[3]

The birth name of Den was misread in ramesside times. The Royal Table of Abydos has “Sepatju” written with two symbols for “district”. This derives from the two desert symbols Den originally had used. The Royal Canon of Turin refers to “Qenentj”, which is quite difficult to translate. The origin of the hieroglyphs used the Royal Canon of Turin remains unknown. The Royal Table of Sakkara mysteriously omits Den completely. [10]

According to archaeological records, at the very beginning of his reign, Den had to share the throne with his mother Meritneith for several years. It seems that he was too young to rule himself. Therefore Meritneith reigned as a regent or de facto pharaoh for some time. Such a course of action was not unusual in ancient Egyptian history. Queen Neithhotep may have taken on a similar role before Meritneith, while queens such as Sobekneferu and Hatshepsut were later female Egyptian rulers. Den´s mother was rewarded with her own tomb of royal dimensions with her own mortuary cult.[4][9] 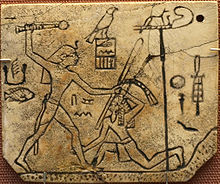 An important innovation during Den´s reign was the introduction of numbering using hieroglyphs. Prior to this, important year events were merely depicted in signs and miniatures, sometimes guided by the hieroglyphic sign of a bald palm panicle (renpet), meaning “year”. From Den's reign onwards, the Egyptians used numbering hieroglyphs for a range of purposes including calculating tax collections and for annotating their year events.[11]

Most religious and political happenings from Den´s reign are recorded in the numerous ivory tags and from the Palermo Stone inscription. The tags show important developments in typographics and arts. The surface is artistically parted into sections, each of them showing individual events. For example, one of these tags reports on a epidemic then affecting Egypt. The inscription shows the figure of a shaman with an undefined vessel or urn at his feet. A nearby inscription begins with “Henu...” but it is unclear, if that means “provision” or if it is the first syllable of the name “Henu-Ka” (a high official).[3]

Another tag, known as the “MacGregor Label”, shows the first complete depiction of an Egyptian king with the so-called Nemes head dress. The picture shows Den in a gesture known as “smiting the enemy”. In one hand Den holds a smashing sceptre, in the other hand he grabs a foe by his hair. Thanks to the dreadlocks and the conic beard the foe has been identified as of Asian origin. The hieroglyphs at the right side say “first smiting of the east”. At the left side the name of the high official Iny-Ka is inscribed. It seems that Den sent troops to Sinai and the eastern desert a number of times. Plundering nomads, known by the early Egyptians as Iuntju (“peoples with hunting bows”), were regular foes of Egypt, often causing trouble. They are again mentioned in a rock inscription at Sinai under king Semerkhet, one of Den´s successors.[12][13][3]

year 18–22 at the recto of the Cairostone fragment C5

More events are reported on the Palermo Stone fragments. The Oxford fragment records the following events:

The second celebration of the Hebsed (a throne jubilee) is affirmed by several stone vessel inscriptions from Den´s necropolis.[18]

The reconstructed entrance to "Tomb T" at Umm el-Qa'ab in Abydos, the tomb of Den

Den was interred within a tomb ("Tomb T") in the Umm el-Qa'ab area of Abydos, which is associated with other first dynasty kings.[19] Tomb T is among the largest and most finely-built of the tombs in this area, and is the first to feature a staircase and a floor made of granite.[20]

His was the first tomb to have a flight of stairs leading to it, those of earlier kings being filled directly above from their roofs. It is possible that the tomb may have used as a storehouse for surplus produce during the king's lifetime, while also making it easier to add grave goods for later use in the afterlife by Den.[21]

Tomb T is also the first tomb to include architectural elements made of stone rather than mud-brick.[22] In the original layout for the tomb, a wooden door was located about half-way up the staircase, and a portcullis placed in front of the burial chamber, designed to keep out tomb robbers.[23] The floor of the tomb was paved in red and black granite from Aswan, the first architectural use of such hard stone on a large scale.

Twenty labels made of ivory and ebony were found in his tomb, 18 of them were found by Flinders Petrie in the spoil heaps left by the less thorough archaeologist Émile Amélineau[24] Among these labels are the earliest known depictions of a pharaoh wearing the double-crown of Egypt, as well as running between ritual stele as part of the Sed festival.[25]

Tomb T is surrounded by the burial sites of 136 men and women[26] who were buried at the same time as the king. Thought to be the king's retainers, an examination of some of the skeletons suggests they were strangled, making this an example of human sacrifice which is considered to be common with the pharaohs of this dynasty. This practice which seems to have ceased by the conclusion of the dynasty with shabtis taking the place of the bodies of actual people to aid the pharaohs with the work expected of them in the afterlife.[27]