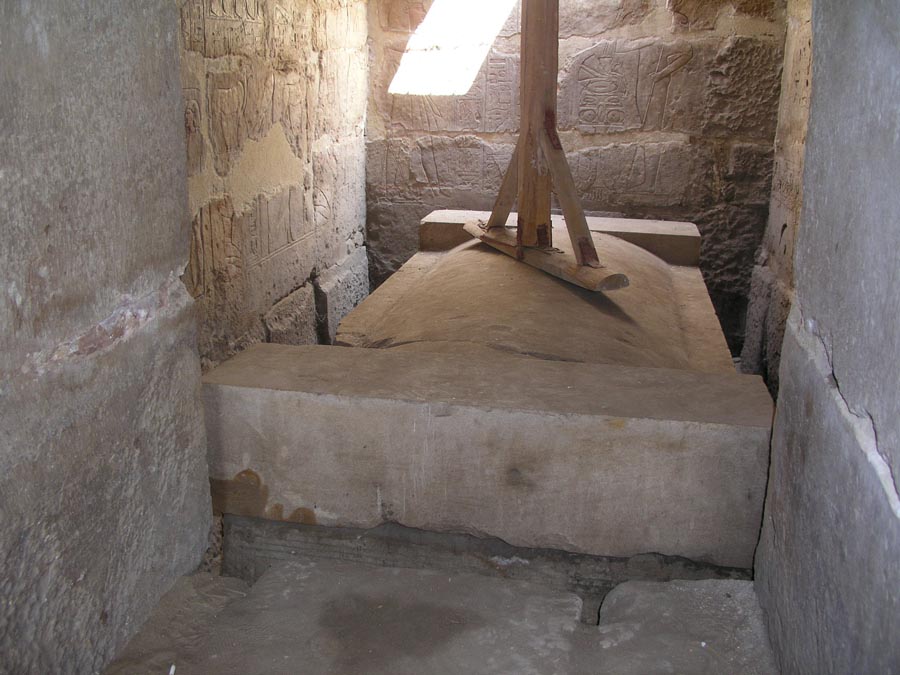 Hedjkheperre Setepenre Takelot I was a son of and Queen Tashedkhons who ruled for 13 Years according to . Takelot would marry Queen Kapes who bore him . Initially, Takelot was believed to be an ephemeral Dynasty 22 Pharaoh since no monuments at Tanis or Lower Egypt could be conclusively linked to his reign, or mentioned his existence, except for the famous Pasenhor Serapeum which dates to Year 37 of . However, since the late 1980's, have assigned several documents mentioning a king Takelot in Lower Egypt to him rather than Takelot II. Takelot I's reign was relatively short when compared to the three decades-long reigns of his father and son, . Takelot I, rather than Takelot II, was the king "Hedjkheperre Setepenre Takelot" who is attested by a Year 9 stela from as well as the owner of a partly robbed Royal Tomb at Tanis which belonged to this ruler as the German Egyptologist Karl Jansen-Winkeln reported in a 1987 Varia Aegyptiaca 3 (1987), pp.253-258 paper. [K.A. Kitchen, in the introduction to his third 1996 edition of "The Third Intermediate Period in Egypt (c.1100-650 BC)," Aris & Phillips Ltd. pp.xxiii] Evidently, both king Takelots used the same prenomen or royal name: Hedjkheperre Setepenre. The main difference between Takelot I and II is that Takelot I never employed the Theban inspired epithet 'Si-Ese' (Son of Isis) in his titulary, unlike . [Kitchen, op. cit., p.xxiii]

As Kenneth Kitchen writes in the third (1996) edition of his book on "The Third Intermediate Period in Egypt":: "It was Takeloth I who first used the prenomen Hedjkheperre Setepenre (in imitation of his grandfather Shoshenq I), being followed in this [practise] by Takeloth II. The only clear distinction...between Takeloth I and II (as both use the epithet Meriamun) is that Takeloth II uses also the epithet Si-Ese, "Son of Isis", in his second cartouche. A second marker suggested by Jansen-Winkeln (with some reserve) is that Takeloth I has his name spelt with the vertical "t"-sign (Gardiner U33, "ti" becoming "t"), while [both] Takeloth II and III use the small loaf "t"-sign (X 1), and the rope-tether sign (V 13). This criterion...seems sound. This would suggest attributing to Takeloth I (not II) a donation-stela of Year 9 (from Bubastis), another in Berlin (also from Bubastis) and a fragment in the former Grant collection. This also bears on the high priests of Ptah at Memphis and the Serapeum. There, a block is known bearing the name of a high priest Merenptah and a pair of cartouches hitherto attributed to Takeloth II which, in fact, correspond precisely to those now attributable to Takeloth I (no Si-Ese; tall "t"). Therefore it seems proper to move this priest back in time to the reign of Takeloth I." [Kitchen, op. cit., p.xxiii]

Evidence that the royal Tanite belonged to Takelot I was suggested long ago by the presence of found within the burial which mentioned his known parents: "namely a Gold Bracelet (Cairo JE 72199) and an alabaster Jar (Cairo JE 86962) of Osorkon I, and a figure of Queen Tashedkhons." [D.A. Aston, Takeloth II: A King of the 'Theban Twenty-Third Dynasty?,' pp.143-144] In addition, a heart scarab found in the king's burial gave his name simply as "Takelot Meryamun" without the Si-Ese epithet used by Takelot II. Recent confirmation of this circumstantial evidence was published by the German scholar Jansen-Winkeln in 1987. [Karl Jansen-Winkeln, "Thronname und Begräbnis Takeloth I," Varia Aegyptica 3, (December 1987), pp.253-258] His examination of several inscriptions written on the tomb's walls proved beyond doubt that the person buried here could only be Takelot I, Osorkon II's father. Jansen-Winkeln's conclusions have been accepted by Egyptologists today including Professor Kenneth Kitchen. Osorkon II arranged for this aforementioned inscription to be carved on a scene in his tomb where Osorkon is depicted adoring Osiris and Udjo (as a uraeus).

Above the inscription was carved the cartouche of Osorkon II and the following text.

This Text establishes that Osorkon II honoured his father by reburying him in the Tanite royal tomb complex. Takelot I's final resting place forms the third chamber of Osorkon II's tomb which means that Osorkon II interred his father within the walls of his own tomb. Takelot I was buried in an usurped Middle Kingdom sarcophagus that was inscribed with his own cartouche. [ [http://www.egyptologyonline.com/tanis.htm Tanis] ]

Takelot I's authority was not fully recognised in Upper Egypt, and , or another local Theban king, challenged his power there. Several at Thebes mention two sons of namely the High Priests of Amun and in Years 5, 8 and 14 of an anonymous king who can only be Takelot I since Takelot I was their brother. [Kitchen, op. cit., pp.121-122] Uniquely, however, the Quay Texts specifically omit any reference to the identity of the king himself. This might suggest that there was a dispute in the royal succession following Osorkon I's death in Upper Egypt, which seriously impaired Takelot I's control there. , as the son of the High Priest and grandson of Osorkon I, or a hypothethical king named Maatkheperre Shoshenq must have appeared as a rival. The Theban priests henceforth, chose to avoid any involvement in this dispute by deliberately leaving the name of the king in the Quay Texts 'Blank' rather than choosing sides, as G. Broekman notes in his study of the Karnak Quay Texts. [Gerard Broekman, "The Nile Level Records of the Twenty-Second and Twenty-Third Dynasties in Karnak," JEA 88(2002), pp.170 & 173] This situation was ultimately later resolved by Osorkon II who is clearly attested as Pharaoh at Thebes by his 12th Regnal Year, according to Nile Quay Text No.8 and Text No.9.