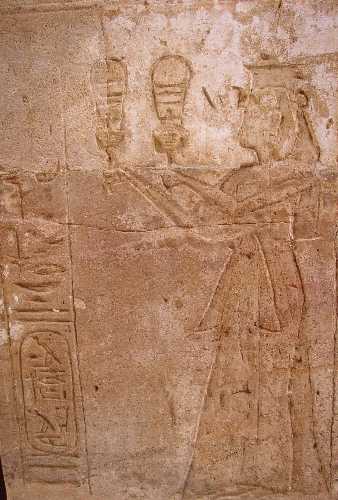 Queen Twosret was the last known female king of of a local indigenous dynasty and the final of the . She is recorded in 's Epitome as a certain "Thuoris" who ruled Egypt for seven years, but this figure included the nearly six year reign of Siptah, her predecessor. [Erik Hornung, Rolf Krauss & David Warburton (editors), Handbook of Ancient Egyptian Chronology, Brill: 2006, p.214] Consequently, her sole independent reign would have lasted for slightly more than one full year from 1191 to 1190 BC. Her royal name, Sitre Meryamun, means "Daughter of Re, beloved of Amun." [Clayton, op. cit., p.158]

Twosret, as the daughter of and king , was the senior royal wife of , and may have been the sister of the usurper . She was identified as the Queen to Seti II in a cache of jewelry found in the . A found in and known as Unknown Woman D has been identified by some scholars as possibly belonging to Twosret, but there is no other evidence for this other than the correct Nineteenth Dynasty period of mummification.

After her husband's death, she became first regent to Seti's heir jointly with , whom some have identified as the mentioned in the . Siptah was likely a stepson of Twosret since his mother is now known to be a certain Sutailja or Shoteraja from Louvre Relief E 26901. [Gae Callender, The Cripple, the Queen & the Man from the North, KMT Volume 17, No.1 (Spring 2006), p.52] When Siptah died, Twosret officially assumed the throne for herself, as the "Daughter of Re, Lady of Ta-merit, Twosret of Mut" [Tydlesey, Joyce (2006) "The Complete Queens of Egypt"(American University in Cairo Press)] , and assumed the role of a Pharaoh.

While it was commonly believed that she ruled Egypt with the aid of , a recently published document by Pierre Grandet in a BIFAO 100(2000) paper shows that Bay was executed on Siptah's orders during Year 5 of this king's reign. The document is a hieratic ostracon or inscribed potshard and contains an announcement to the workmen of Deir El-Medina of the king's actions. No immediate reason was given to show what caused Siptah to turn against "the great enemy Bay," as the ostracon states. The recto of the document reads thus:

This date accords well with Bay's last known public appearance in Year 4 of Siptah. The ostraca's information was essentially a royal order for the workmen to stop all further work on Bay's tomb since the latter had now been deemed a traitor to the state. [Gae Callender, The Cripple, the Queen & the Man from the North, KMT, Spring 2006, p.54]

Twosret's reign ended in a which is documented in the Elephantine stela of her successor Setnakhte who became the founder of the Twentieth dynasty. It is not known if she was overthrown by Setnakhte or whether she died peacefully in her short reign; if the latter is the case, then a struggle must have ensued among various factions at court for the throne in which Setnakhte emerged victorious.

It is believed that expeditions were conducted during her reign to the turquoise mines in Sinai and in Palestine and statues have been found of her at Heliopolis and Thebes. Her name is also found at Abydos, Hermopolis, Memphis, and in Nubia.

Twosret's tomb has a complicated history; it was started in the reign of Seti II, and may originally have been intended to house both king and queen, extended in the reign of Setnakhte, more work was completed during her reign, but it was still unfinished at her death. This tomb in the was then usurped by , and extended to become the deepest royal tomb in the valley while her was reused by in . Seti II was reburied in tomb . Twosret constructed a mortuary temple next to the , but it was never finished and was only partially excavated (by Flinders Petrie in 1897), although recent re-excavation by Richard H. Wilkinson shows it is more complex than first thought. A cartouche of hers believed to come from Qantir in the Delta has been found, and her name has been found associated with the mines in the .