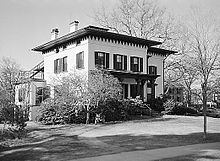 The James Dwight Dana House, also known as the Dana House, is a historic 19th century Italianate house in New Haven, Connecticut in the United States. This building, designed by New Haven architect Henry Austin on Hillhouse Avenue, was the home of Yale University geology professor, James Dwight Dana. It was declared a National Historic Landmark in 1965.[2][3]

The building has housed the Department of Statistics at Yale for over 30 years. It was renovated during 1996.[4]

The house is a contributing building in the Hillhouse Avenue Historic District, which was defined in 1985 to extend south of Trumbull Street to include just the triangular property holding the James Dwight Dana House building.[5]