Moscopole (Albanian: Voskopojë, Aromanian: Moscopole, Moscopolea, Greek: Μοσχόπολις Moschopolis, Italian: Moscopoli) was a cultural and commercial center of the Aromanians,[2] and now a small municipality in Korçë District, modern southeastern Albania.[3] At its peak, in the mid 18th century, it hosted the first printing press in the Balkans outside Istanbul, educational institutions and numerous churches and became a leading center of Greek culture.[4][5]

Historians have attributed the decline of the city to a series of raids by Muslim Albanian bandits, that almost destroyed the town in 1769 following the participation of the residents in the preparations for the Orlov Revolt in 1770,[6] and culminated with the abandoning and destruction of Moscopole in 1788.[7][8] Moscopole once a prosperous city was reduced to a small village by Ali Pasha. According to another opinion, the city's decline was mainly due to the relocation of the trade routes in central and eastern Europe following the aforementioned raids.[6] Today Moscopole, known as Voskopojë, is a small mountain village, and along with a few other local settlements is considered a sort of Holy-land to local Orthodox Christians and was one of the original homelands of the Aromanian diaspora.[9]

Moscopole is located at a distance of 21 km from Korçë, in the mountains of southeastern Albania, at an altitude of 1160 meters. Because of its high altitude Moscopole is a ski resort.[citation needed] The municipality Voskopojë consists of the villages Voskopojë, Shipskë, Krushovë, Gjonomadh and Lavdar.[10]

The coat of arms of Moscopole.

Although located in a rather isolated place in the mountains of southern Albania, the city rose to become the most important center of the Aromanians. Moscopole was a small settlement until the end of the 17th century, but afterwards showed a remarkable financial and cultural development.[6] Some writers have claimed that Moschopolis in its glory days (1730–1760) had as many as 70,000 inhabitants; other estimates placed its population closer to 35,000;[11][12] but a more realistic number may be closer to 3500: "...The truth may be closer to this number [sc. 3500] than to 70,000. Moschopolis was certainly not among the largest Balkan cities of the 18th century".[13]

According to the Swedish historian Johann Thunmann who visited Moscopole and wrote a history of the Aromanians in 1774, everyone in the city spoke Aromanian; many also spoke Greek, which was used for writing contracts. The city is also said to have been mainly populated by Vlachs/Aromanians. A 1935 analysis of the family names shows that the majority of the population were indeed Vlachs. There were also Albanians and Greeks.[14] 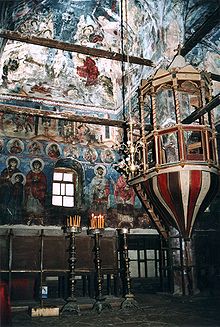 The extensive livestock farming of the surrounding region led to the establishment of wool processing and carpet manufacturing units and the development of tanneries, while other locals became metal workers, silver and cooper smiths using materials.[6] During the middle of the 18th century, the city became an important economic center whose influence spread over the boundaries of the Ochrid diocese, which was part, into most of the Ottoman ruled Eastern-Orthodox world reaching as far as Austro-Hungary. Until 1769, the town traded on a large scale with renowned European commercial centres of that time, such as Venice, Vienna and Leipzig.[15]

A printing press was also operating in Moscopole which was the second one in the of Ottoman Europe after that of Constantinople. This establishment produced a total of nineteen books, mainly Services to the Saints but also the Introduction of Grammar by the local scholar Theodore Kavalliotis.[6] The later became director of the city's prestigious educational institution, which from 1744 was known as New Academy or Hellenikon Frontistirion, sponsored by the wealthy merchants of the diaspora. Moreover the city hosted an orphanage, known as Orphanodioiketerion, possible the first in the post-Byzantine Orthodox world,[16] a hospital and a total of 24 churches.[3]

A cultural effervescence arose in Moscopole, and many authors published their works in both the Greek language (which was the language of culture of the Balkans at the time) and Aromanian written in the Greek alphabet. In 1770, the first dictionary of four modern Balkan languages (Greek, Albanian, Vlach/Aromanian and Bulgarian) was published here. Daniel Mоscopolites a Vlach-speaking native priest of Moscopole, compiled a quadrilingual lexicon of Greek, Vlach, Bulgarian and Albanian, that aimed at the Hellenization of the non-Greek-speaking Christian communities in the Balkans.[17][18] Due to the high level of intellectual activity and Greek education Moscopole was nicknamed as New Athens or New Mystra.[19][20]

Dictionary of four Balkan languages (Greek, Albanian, Aromanian and Bulgarian) created from Daniel Mоscopolites, an Aromanian from Moscopole, probably in 1770 and published in 1794 in the Greek language.[21][22][23][24]

The 1769 sacking and pillaging by Muslim Albanian[14] troops was just the first of a series of attacks, which culminated with the razing of 1788 by the troops of Ali Pasha.[25] Moscopole was practically destroyed by this attack, while some of its commerce shifted to nearby Korçë and Berat.[26] 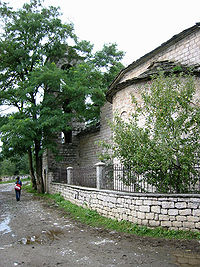 The survivors were thus forced to flee, most of them emigrating mainly to Thessaly and Macedonia (where they returned to their ancestral occupation of animal husbandry). Some of the commercial elite moved to Austria-Hungary, especially to the two capitals Vienna and Budapest, but also in Transylvania, where they had an important role in the early National awakening of Romania. The city never rose to its earlier status. However, a new school was established at the end of the 18th century whose headmaster at 1802 was Daniel Moscopolites. This school functioned the following decades, thanks to donations and bequests by baron Simon Sinas, a member of the diaspora.[27]

In 1914 Moscopole was part of the Autonomous Republic of Northern Epirus. It was destroyed again in 1916 during World War I by the marauding Albanian bands of Sali Butka.[28] The remaining buildings were razed three times during the partisan warfare of World War II: once by Italian troops and twice by the Albanian collaborationist Balli Kombëtar organization.[29] Of the old city, six Orthodox churches (one in a very ruined state), a bridge and a monastery survive. In 2002, the five standing churches were put on the World Monuments Fund's Watch List of 100 Most Endangered Sites.

Today, Moscopole is just a small mountain village in the Albanian District of Korçë. In 2005 the municipality had a population of 2,218,[1] whereas the settlement itself has a population of around 500.[3] Memories of the city of Moscopole still remain an important part of the culture of Vlachs.