Pen y Fan is the highest peak in South Wales and southern Britain, situated in the Brecon Beacons National Park. At 886 metres (2,907 ft) above sea-level, it is also the highest peak in Britain south of the Snowdonia mountain range. The twin summits of Pen y Fan and Corn Du were formerly referred to as Cadair Arthur or 'Arthur's Seat'.[1]

The summit lies on a ridge stretching from Talybont Reservoir in the east, to the A470. 500 m (1,600 ft) west lies the subsidiary top of Corn Du, beyond which the terrain drops at a moderate angle to the subsidiary top of Y Gyrn then more steeply to the Storey Arms on the A470. To the east, the ridge drops steeply to the col connecting it to Cribyn, the next mountain along the ridge. From Corn Du, a gentle ridge descends south towards Merthyr Tydfil.

The mountain and surrounding area are owned by the National Trust whose work parties attempt to combat the erosion caused by the passage of thousands of feet up and down this most popular of South Wales' peaks. The mountain is used by the military as part of the selection process of the UK's Special Forces personnel. (See "Fan Dance").

Pen y Fan is formed from various units of the Old Red Sandstone which were laid down during the Devonian period. The lower slopes of the mountain are formed from the sandstones and mudstones of the Senni Beds Formation whilst the upper slopes are formed from those of the Brownstones Formation. The very summit, like that of neighbouring Corn Du, is composed of hard-wearing sandstones of the Plateau Beds Formation. The beds of sandstone dip gently southwards towards the South Wales Coalfield basin.
The Brecon Beacons nurtured their own glaciers during the last ice age and both Cwm Llwch and Cwm Sere were excavated by glaciers which grew in the lee of the high ground. Llyn Cwm Llwch occupies a glacially excavated rock hollow and the lake is partly dammed by a late-glacial moraine.[2] The mountain is the highest point within the Fforest Fawr Geopark which was established in 2005 to promote economic development, particularly sustainable tourism, based on the area's geological heritage. 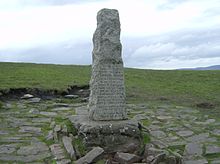 On the route from the Storey Arms (once a coaching inn on the Brecon to Merthyr road) to the summit, a memorial obelisk commemorates a five-year-old boy who died in August 1900. The son of a Rhondda coal miner, Tommy lost his way near Cwm Llwch Farmhouse while visiting his grandparents, starting a twenty-nine day search which aroused nationwide concern. His body was found at the spot marked by the obelisk. Tommy had died from exhaustion and hypothermia or exposure, but how a small boy managed to climb so high remains a mystery.

The inscription on the granite obelisk reads, "This obelisk marks the spot where the body of Tommy Jones aged 5 was found. He lost his way between Cwm Llwch Farm and the Login on the night of August 4, 1900. After an anxious search of 29 days his remains were discovered Sept. Erected by voluntary subscriptions. W Powell Price Mayor of Brecon 1901."

The obelisk, a useful landmark in misty conditions, was paid for by the proceeds of a memorial fund started when the jurors at the boy’s inquest waived their fees.

The search was used as the theme of the 1980 film, Tommy Jones.[citation needed]

The Pen y Fan Race, held annually on a Saturday in mid July, starts in the field immediately south of Cwm Llwch. The route takes runners to the top of Corn Du and Pen y Fan before descending the steep slope NW from the summit to rejoin the walkers’ path above the stile. The race is 3.5 miles (5.6 km) long, with 1,930 feet (590 m) of ascent, classified as "AS" (A being the most severe category, S meaning short). The men’s record of 30 minutes 00 seconds was set by Keith Anderson in 1992, when the race was a counter in the British Fell Running Championships; summiting in third place, Keith descended the 1.5 miles (2.4 km) from the summit of Pen y Fan to the finish in 7m 10s. Keith was an international standard road runner, competing in the Commonwealth Games Marathon in 1998, and was also reputed to be perhaps the fastest ever fell-running descender. In 2010 a prize of £500 was on offer for breaking the record, rising by £100 each year; race winner Martin Shaw from local fell running club Mynydd Du finished in 34:05. The Pen y Fan Race is held on a Saturday, and with the ten mile (16 km) Fan y Big Horseshoe Race on the Sunday comprises the "Brecon Fans Race Weekend".

From the summit on a clear day the Bristol Channel (including the islands of Flat Holm and Steep Holm), Cardigan Bay, Carmarthen Bay, Swansea Bay, the Gower Peninsula, the Black Mountains, the Cambrian Mountains, Exmoor, the town of Brecon and much of Mid Wales and the South Wales Valleys can be seen.