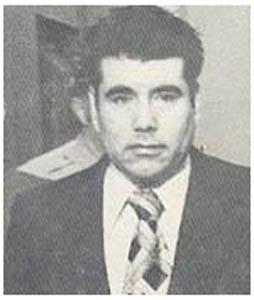 He was convicted of the 1971 s of 25 s; men who had been found buried in shallow graves in the s of fruit ranches in , along the north of Yuba City, where they did seasonal ing and jobs.

At that time, these gruesome s represented the worst and most notorious in U.S. history. The local said even more men may have been buried in the area.

Corona was sentenced in 1973 to 25 life sentences. His second trial, in 1982, failed to render an and he was returned to to serve out his sentence.

Born in Autlán, , , Corona first entered the in 1950. Crossing the into illegally, the 16 year old picked carrots and melons in the Imperial Valley for three months before moving on north to the . His half-brother, Natividad Corona (c. -, ), had migrated to the state in 1944 to work, and settled at Marysville, across the Feather River from Yuba City.

Corona moved to the Marysville/Yuba City area in May 1953, at the suggestion of Natividad, and found work on a local ranch. He was first married to Gabriella E. Hermosillo on , 1953, in . [ Washoe County Clerk, Reno, NV, Marriage License No. 386376. ] In 1959, he married Gloria I. Moreno and they had four daughters.

In late December 1955, a bad occurred on the Yuba and Feather Rivers. It was one of the most widespread and destructive of any in the recorded history of .

Corona was suffering from an episode of .

Afterward, Natividad sent him back to Mexico. Corona then returned to the U.S. legally, with a green card. At this time, he stopped drinking. Besides schizophrenic episodes, and a reported violent temper, Corona was regarded as a hard worker. In 1962, he became a licensed labor contractor. He was in charge of hiring workers to staff the local fruit ranches.

Corona reportedly was outwardly macho and had anger issues with men. His half-brother, Natividad, who was gay, owned the Guadalajara Cafe in Marysville. Early on the morning of , , a young man named José Romero Raya was brutally attacked with a machete in the restroom of the cafe. He was discovered by customers at 1:00 a.m., hacked about the head and face, and Natividad called the police. Raya filed a against Natividad, winning a judgment of $250,000, which prompted him to sell his business and return to Mexico before paying.

In March 1970, Corona was again committed to DeWitt State Hospital for treatment. A year later, in March 1971, he applied for welfare for the first time, as there was little ranch and/or farm work available. His application was denied, however, because he had too many assets, two houses and some money in the bank.

On , 1971, a rancher named Goro Kagehiro was touring his peach orchard near Yuba City, when he saw a freshly dug hole, which was approximately seven feet long and three and a half feet deep. Returning that night, he found the hole had been filled in. Believing someone had buried their trash on his property, Kagehiro called the . On the morning of , several sheriff's deputies responded to Kagehiro's call and proceeded to dig. Instead of finding what was suspected, the fresh corpse of a slender male, aged 40 years, named Kenneth Whitacre, [ California Death Index, Kenneth E. Whitacre, born: 4-14-1931 CA, died: Sutter Co. 5-20-1971, age: 40 yrs. ] was discovered in what turned out to be a shallow grave.

Four days later, workers on the nearby fruit ranch of Jack Sullivan reported finding a sunken area of ground. This second burial site contained the body of a 67 year old , Charles Fleming. [ California Death Index, Charles C. Fleming, born: 7-15-1903 LA, died: Sutter Co. 5-25-1971, age: 67 yrs. ] Before s had him identified, another grave was discovered, and then another. As the surrounding area continued to be excavated, victims were unearthed at a surprising rate. All of them were white, except two. They were apparently men no one would miss&mdash;middle-aged and elderly alcoholics and drifters who eked out anonymous existences. [ "", May 30, 1971, "Mass Murder Toll Rises to 23; Flood Threat Perils Body Hunt," p. 0_1 ]

All of the victims had been stabbed and were mutilated viciously about their heads with a machete. One man was shot.

The victims were found to have all been murdered during a period of six weeks; an average of one murder every 40 hours. Documents were found in some of the graves that showed the name Juan Corona.

Some of the victims had been last seen, es told police, riding in the of labor contractor Juan Corona.

In the early morning hours of , 1971, police burst into Corona's Yuba City home with a and ed him. Damning evidence indicating his guilt was discovered and seized, such as two bloodstained knives, a machete, a pistol and blood stained clothing. There was also a work ledger that contained 34 names and dates, including seven of the known victims. The ledger came to be referred to as a "death list" by the prosecution, who alledged it recorded the dates the men were murdered.

Corona was provided legal aid and assigned a , Roy Van den Heuvel, who hired several s to perform a mental evaluation. Although the sheriff, Roy Whiteaker, said the prisoner was in no apparent or immediate danger from his fellow townsmen, Corona was moved to the new and larger in Marysville, on , 1971, for "security reasons." [ "Los Angeles Times", May 31, 1971, "Suspect in Mass Murders Moved to Marysville Jail," p. 1 ]

On , Corona was returned to Sutter County for , which was closed to the media and . A of innocent was entered and a date was set for Corona's . [ "Los Angeles Times", Jun. 3, 1971, "Yuba City Mass Murder Suspect Pleads Innocent," p. 1 ]

By the time the search was terminated on , a total of 25 male victims had been discovered. Four of them were unidentified. Sheriff Whiteaker said he believed even more bodies may have been buried in the area.

On , Van den Heuvel was replaced by Richard Hawk, a privately retained defense attorney. [ "Los Angeles Times", Jun. 15, 1971, "Attorney Dismissed in Mass Murder Case," p. C19 ] In return for his legal representation, an agreement was made granting Hawk exclusive literary and tic property rights to the 's life story, including the proceedings against him. Under the agreement, Corona waived the . Shortly after taking over the defense, and even before seeing Corona's or reading any of the s, Hawk decided against having him d not guilty by reason of insanity and fired the psychiatrists. [ "Los Angeles Times", Jun. 16, 1971, "No Plea of Insanity Planned for Corona,'" p. 32 ]

Corona complained of chest pain from his cell in Yuba City, on , and was taken to the hospital, where he was diagnosed with having a mild heart attack. [ "Los Angeles Times", from Yuba City (UPI), Jun. 30, 1971, "Mild Heart Attack Suffered By Corona," p. 18 ] The returned a 25-count murder against him on . [ "Los Angeles Times", Jul. 13, 1971, "Jury Raises Corona Murder Counts to 25," p. 18A ] In early August, Corona was hospitalized again after complaining of chest pain and saying he had not been able to sleep because of it. [ "Los Angeles Times", from Yuba City (UPI), Aug. 9, 1971, "Corona Hospitalized 2nd Time After Complaining of Chest Pain," p. 3 ]

It took over a year after the murders were discovered for the case against Corona to come to trial. The California Supreme Court voided the death penalty in the state on , , ruling it unconstitutional, cruel and unusual. [ "Los Angeles Times", Feb. 18, 1972, "No Death Penalty --- Cal. Court Voids It; Appeal Likely --- Punishment Ruled 'Cruel and Unusual,'" p. 1 ] Therefore, it would not be a capital case. Hawk succeeded in getting a from Sutter County, to Solano County.

The trial began on , 1972, at the courthouse in , more than an hour from Yuba City. took several weeks, and the trial itself another three months.

Though Corona denied , he was not called to the stand to testify in his own defense and no defense witnesses were called. The deliberated for 45 hours and returned a , on , , finding Corona guilty of first degree murder on all 25 counts charged. [ "Los Angeles Times", Jan. 18, 1973, "Corona Guilty --- Convicted of All 25 Murders --- Courtroom Stunned by Verdict," p. 1 ] The , Richard Patton, sentenced the 38 year old Mexican to 25 terms of , to run consecutively, without the possibility of .

Corona was first incarcerated at Vacaville's , nine miles from Fairfield, because of the heart irregularities he had experienced. On , 1973, he was stabbed 32 times in his cell because he had bumped into a homosexual inmate in a corridor and failed to say, "excuse me." His left eye was removed in surgery. Of the five men questioned, including the one involved in the bumping incident, one identified as the man's homosexual partner and three inmates identified as friends of the partner, four were charged with assault with a deadly weapon. [ "Los Angeles Times", Dec. 6, 1973, "The State --- Bumping Incident Linked to Corona Stabbing," p. B3 ] [ "Los Angeles Times", Dec. 22, 1973, "Four Inmates Charged in Corona Attack," p. A12 ]

He was transferred to the [http://www.cdcr.ca.gov/Visitors/Facilities/CTF.html Correctional Training Facility] (CTF), . In early January 1974, Corona's wife, Gloria, filed for in Fairfield, citing as grounds. [ "Los Angeles Times", Jan. 8, 1974, "The State," p. OC2 ] It was granted on .

On , , Corona's conviction was overturned by an appeals court who upheld a petition by his defense attorney, Terence Hallinan, claiming his original legal team had been incompetent. They had not put forward schizophrenia as a or pleaded the .

The second trial began on , , in . [ "Los Angeles Times", Feb. 22, 1982, "Corona Retrial Begins," p. A1 ] Corona's defense posited that the real murderer of the ranch workers was most likely Natividad Corona, a known homosexual who was accused of attacking Romero Raya at his cafe in Marysville, and after loosing the lawsuit Raya filed had fled back to his native Mexico. [ "Los Angeles Times", Mar. 16, 1982, "Corona Kin May Be Killer, Lawyer Hints --- 'Maniacal Half-Brother Suggested as Murderer of 25 Laborers,'" p. B3 ] Natividad had died eight years earlier in Guadalajara. [ "Los Angeles Times", from Guadalajara (UPI), Jun. 8, 1973, "Corona Sister Tells of Three Family Deaths," p. F8 ]

This time around, more than 50 defense witnesses were called to the stand by Hallinan. Corona was called in his own defense. He was asked only two questions, through an interpreter, taking only two minutes. "Do you understand the state has accused you of killing 25 men?" "Yes," Corona answered, almost inaudibly. "Did you have anything to do with killing those men?" "No," Corona replied. Hallinan then turned Corona over to the , Ronald Fahey, for . Startled prosecution attorneys requested a brief recess to gather their wits and prepare some of the more than 630 exhibits for their cross. [ "Los Angeles Times", from Hayward, California, Jul. 21, 1982, "Corona Takes Stand, Denies 25 Slayings," p. OC22 ] Later, Fahey questioned Corona about various vans and cars he used at the ranch where he worked and where he lived, in which some weapons were found.

The trial lasted seven months. Corona was again convicted of the crimes on , 1982, and returned to prison after the failed to persuade the jury, which deliberated for 54 hours over a two week period, of his innocence. Afterward, the foreman told the press that the most incriminating piece of evidence against Corona was his work ledger, for which the labor contractor had "no reasonable explanation." [ "Los Angeles Times", from Hayward, California, Sep. 24, 1882, "Corona Found Guilty Again --- Convicted of Killing 25 in 1971," p. 1 ] He said the jury had dismissed the defense contention that Natividad committed the murders. "He wasn't in Marysville enough to have committed the bulk of the killings," he said.

Juan Corona was transferred from CTF at Soledad to Corcoran State Prison, , in 1992, where he is currently serving his life sentence in the protective housing unit.