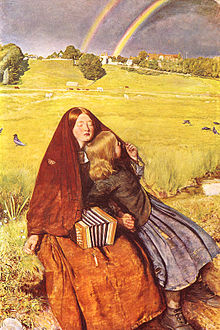 A vagrant is a person in poverty, who wanders from place to place without a home or regular employment or income.

A vagrant is "a person without a settled home or regular work who wanders from place to place and lives by begging;" vagrancy is the condition of such persons.[1]

In settled, ordered communities, vagrants have been historically characterised as outsiders, embodiments of otherness, objects of scorn or mistrust, or worthy recipients of help and charity. Some ancient sources show vagrants as passive objects of pity, who deserve generosity and the gift of alms. Others show them as subversives, or outlaws, who make a parasitical living through theft, fear and threat. Some fairy tales of medieval Europe have beggars cast curses on anyone who was insulting or stingy towards them. In Tudor England, some of those who begged door-to-door for "milk, yeast, drink, pottage" were thought to be witches.[2] In some East Asian and South Asian countries, the condition of vagrancy has long been historically associated with the religious life, as described in the religious literature of Hindu, Buddhist, Jain and Muslim Sufi traditions. Examples include sadhus, dervishes, Bhikkhus and the sramanic traditions generally.

In the Tsardom of Russia, the legal term "vagrancy" (Russian: Бродяжничество, brodyazhnichestvo) was defined in another way than respective terms (vagabondage, Landstreicherei) in Western Europe. Russian law recognized one as a vagrant if he could not prove his own standing (title), or if he changed his residence without a permission from authorities, rather than punishing loitering or absence of livelihood. Foreigners who had been twice expatriated with prohibition of return to the Russian Empire and were arrested in Russia again were also recognized as vagrants. Punishments was harsh: According to Ulozhenie,[3] a vagrant who could not elaborate on his kinship, standing, or permanent residence, or gave false evidence, was sentenced to 4-year imprisonment and subsequent exile to Siberia or another far-off province.

In Criminal Code of RSFSR 1960 which came into force at 1-st of January 1961 systematic (more than two times) vagrancy was punishable up to 2-year imprisonment (section 209).[4]

It was actual till 5-th of December 1991, when Section 209 had been cancelled and vagrancy became not criminal.[5]

At the present, vagrancy in Russian Federation is not a crime or law violence.

But inducing juvenile (under 18) to vagrancy committed by a person over 18 years old is a crime (CC of RF, section 151).

The first major vagrancy law was passed in 1349 to increase the workforce following the Black Death by making "idleness" (unemployment) an offense. By the 1500s the statutes were mainly used as a means of controlling criminals. In the 16th and 17th century in England, a vagrant was a person who could work, but preferred not to (or could not find employment, so took to the road in order to do so), or one who begs for a living. Vagrancy was illegal, punishable by branding, whipping, conscription into the military, or at times penal transportation to penal colonies. Vagrants were different from impotent poor, who were unable to support themselves because of advanced age or sickness. However, the English laws usually did not distinguish between the impotent poor and the criminals, so both received the same harsh punishments. In 1824, earlier vagrancy laws were consolidated in the Vagrancy Act 1824 (UK) whose main aim was removing undesirables from public view. The act assumed that homelessness was due to idleness and thus deliberate, and made it a criminal offense to engage in behaviors associated with extreme poverty. The Poor Law was the system for the provision of social security in operation in England and Wales from the 16th century until the establishment of the Welfare State in the 20th century.

Vagrancy in US law 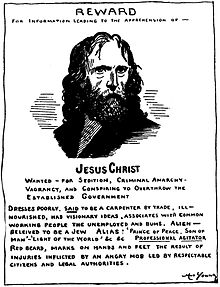 In colonial America, if a person wandered into a town and did not find work, he/she was told to leave town or be prosecuted. In the U.S., vagrancy laws were vague and covered a wide range of activities and crimes associated with vagrants, such as loitering, prostitution, drunkenness, and associating with known criminals. Under the vagrancy laws, police arrested people who were suspected of crime, but who had not committed a crime. Eventually, punishments were changed to a fine, or several months in jail.

After the U.S. Civil War, the South passed Black Codes, laws that tried to control freed black slaves. Vagrancy laws were included in these codes. Homeless unemployed black Americans were arrested and fined as vagrants. Usually, the person could not afford the fine, and so was sent to county labor or hired out to a private employer.

In the U.S. of the 1960s, vagrancy laws were found to be too broad and vague, and in violation of the due process requirements of the Fourteenth Amendment to the U.S. Constitution, as citizens were not informed of which behaviors were illegal. Police had too much power in deciding whether or not to arrest someone. Vagrancy laws could no longer violate Freedom of Speech, such as when police use them against political demonstrators and unpopular groups. U.S. vagrancy laws became clearer, narrower, and more defined. Since then, the status of being a vagrant is punished by the vagrancy laws, while other actions are punished under other laws.

In Papachristou v. Jacksonville, 405 U.S. 156 (1972), the U.S. Supreme Court ruled that a Florida vagrancy law was unconstitutional because it was too vague to be understood.

Nevertheless, new local laws in the U.S. have been passed to criminalize aggressive panhandling activities by vagrants.[6][7] In recent years, there has been an increase in laws criminalizing vagrancy and related activities in the United States – see 2009 Homes Not Handcuffs – some under the rubric of sit-lie ordinances.

In the U.S., some local officials encourage vagrants to move away instead of arresting them. The word vagrant has been replaced by homeless person. Prosecutions for vagrancy are rare, being replaced by prosecutions for specific offenses such as loitering.