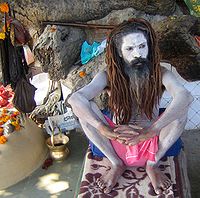 A sadhu in Haridwar, India, during Kumbha Mela. 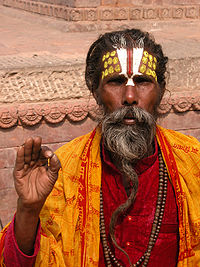 A sadhu in Kathmandu, Nepal.

In Hinduism, sādhu (skt साधु sādhu, “good; good man, holy man”) denotes an ascetic, wandering monk. Although the vast majority of sādhus are yogīs, not all yogīs are sādhus. The sādhu is solely dedicated to achieving mokṣa (liberation), the fourth and final aśrama (stage of life), through meditation and contemplation of brahman. Sādhus often wear ochre-colored clothing, symbolizing their sanyāsa (renunciation).

This way of life is open to women; the female form of the word is sādhvī साध्वी. Also, "Sādhu!" is a Sanskrit and Pali interjection for something well done.[1]

The Sanskrit terms sādhu ("good man") and sādhvī ("good woman") refer to renouncers who have chosen to live a life apart from or on the edges of society in order to focus on their own spiritual practice. in malayalam sadhu is "pavam manushyan".[2]

The words come from the Sanskrit root sādh, which means "reach one's goal", "make straight", or "gain power over".[3] The same root is used in the word sādhana, which means "spiritual practice". 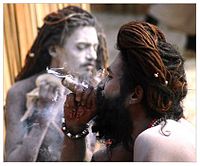 Sadhus are sanyasi, or renunciates, who have left behind all material and sexual attachments and live in caves, forests and temples all over India and Nepal.

A Sadhu is usually referred to as Baba by common people. The word baba also means father, grandfather, or uncle in many Indian languages. Sometimes the respectful suffix -ji may also be added after baba, to give greater respect to the renunciate.

There are 4–5 million sadhus in India today and they are widely respected for their holiness,[4] and sometimes feared for their curses. It is also thought that the austere practices of the sadhus help to burn off their karma and that of the community at large. Thus seen as benefiting society, sadhus are supported by donations from many people. However, reverence of sadhus is by no means universal in India. Historically and contemporarily, sadhus have often been viewed with a certain degree of suspicion, particularly amongst the urban populations of India. Today, especially in popular pilgrimage cities, posing as a sadhu can be a means of acquiring income for non-devout beggars.

There are naked Naga (Digambar, or "sky-clad") Sadhus which are non-shaven and wear their hair in thick locks, and Jata, who carry swords[citation needed]. Aghora sadhus may claim to keep company with ghosts, or live in cemeteries as part of their holy path. Indian culture tends to emphasize an infinite number of paths to God, such that sadhus, and the varieties that sadhus come in have their place. 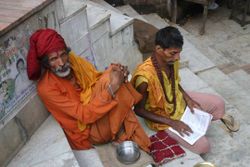 A sadhu and his disciple in Assam, India

Sadhus engage in a wide variety of religious practices. Some practice extreme asceticism while others focus on praying, chanting or meditating.

There are two primary sectarian divisions within the sadhu community: Shaiva sadhus, ascetics devoted to the God Shiva, and Vaishnava sadhus, renouncers devoted to the God Vishnu and/or his incarnations, which include Rama and Krishna. Less numerous are Shakta sadhus, who are devoted to the Goddess — or Shakti, the divine energy — in one form or another. Within these general divisions are numerous sects and subsects, reflecting different lineages and philosophical schools and traditions (often referred to as "sampradayas").

The Smarta sampradayas are called the Dashanami — or Ten Names; sadhus in the sect take one of the ten names as an appellation upon initiation. The sect is said to have been formed by the philosopher and renunciant Shankara, believed to have lived in the 8th century CE, though the full history of the sect's formation is not clear. The Vaishnava sect with the greatest number of members — and indeed the largest sadhu sect in contemporary India — is the Ramanandi sect, said to have been founded by a medieval teacher of bhakti, or devotion, named Ramananda.[citation needed]sadhu are generally known for their lifestyle. 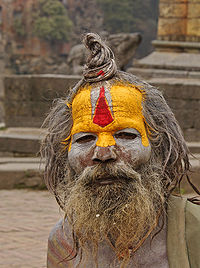 Shaiva sadhus are known as "sannyasis", those who have renounced, or laid down, while Vaishnavas call themselves "vairagis," or dispassionate ones. The terms reflect the different worldviews of the two groups: the philosophy of Shaiva asceticism and renunciation is, in many ways, more austere and radical than that of the Vaishnavas. The Shaiva ascetic worldview emphasizes a radical separation from the mainstream social world and complete commitment to liberation from Samsara, the cycle of birth and death. While Vaishnavas emphasize remaining engaged in the non-sadhu social world through compassionate service.[citation needed]

While sadhus ostensibly leave behind traditional caste at initiation, the caste backgrounds of initiates does influence the sects into which they are admitted; certain ascetic groups, such as the Dandis within the Dashnami sampradaya, are composed only of men of brahmin birth, while other groups admit people from a wide variety of caste backgrounds.[citation needed]

There are female sadhus — known as sadhvis — in many sects. In many cases, the women that take to the life of renunciation are widows, and these types of sadhvis often live secluded lives in ascetic compounds. Sadhvis are sometimes regarded by some as manifestations or forms of the Goddess, or Devi, and are honored as such. There have been a number of charismatic sadhvis that have risen to fame as religious teachers in contemporary India (e.g.- Anandamayi Ma, Sarada Devi, Amritanandamayi Ma, and Karunamayi).[5]

Becoming a sadhu is a path followed by millions. It is supposed to be the fourth phase in a Hindu’s life, after studies, being a father and a pilgrim, but for most it’s not a practical option. For a person to become sadhu needs viragya. Viragya means desire to achieve something by leaving (cutting the attachments with family and society) the world (earthly attachements).

A person who wants to become sadhu must first seek a guru. There, he must perform 'guruseva' which means service. The guru decides whether the person is eligible to take sanyasa by observing the sisya (the person who wants to become a sadhu or sanyasi). If the person is eligible, guru upadesa is done which means teachings. Then only the person transforms into sanyasi or sadhu. There are different types of snayasis in India who follow different sampradya. But, all sadhus have a common goal i.e., mokhsa (liberation).

Becoming a sadhu is a difficult lifestyle. Sadhus are considered to be dead unto themselves, and legally dead to the country of India. They may be required ritually to attend their own funeral before following a guru for many years, serving him by doing menial tasks until acquiring the necessary experience to leave his leadership.

While the life of renunciation is described as the fourth stage of life in the classical Sanskrit literature of the Hindu tradition, and the members of certain sects — particularly those dominated by initiates of brahmin background — have typically lived as householders and raised families before becoming sadhus, many sects are composed of men that have renounced early in life, often in their late teens or early 20s. In a few cases, those who choose the sadhu life are fleeing from family or financial situations which they have found to be untenable,[citation needed] if there is some worldly debt that remains to be repaid, would-be renunciates are encouraged by their gurus to pay off those debts before they become sadhus.[6]

The processes and rituals of becoming a sadhu vary with sect; in almost all sects, a sadhu is initiated by a guru, who bestows upon the initiate a new name, as well as a mantra, or sacred sound or phrase, which is generally known only to the sadhu and the guru and may be repeated by the initiate as part of meditative practice. 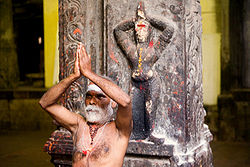 A sadhu in Madurai, India.

The ruggedness of the sadhu life deters many from following the sadhu path. Such practices as the obligatory early morning bath in the cold mountains require a detachment from common luxuries. After the bath, sadhus gather around the dhuni, or holy fireplace, and begin with their prayers and meditation for the day.

Some sadhus dispense cures to the local community, remove evil eyes or bless a marriage. They are a walking reminder to the average Hindu of Divinity. They are generally allowed free passage on the trains and are a close-knit organization.

Kumbh Mela, a mass gathering of sadhus from all parts of India, takes place every three years at one of four points along sacred rivers in India, including the holy River Ganges. In 2007 it was held in Nasik, Maharashtra. Peter Owen-Jones filmed one episode of "Extreme Pilgrim" there during this event. It took place again in Haridwar in 2010.[7] Sadhus of all sects join in this reunion. Millions of non-sadhu pilgrims also attend the festivals, and the Kumbh Mela is the largest gathering of human beings for a single religious purpose on the planet.[8]

The lives of sadhus in contemporary India vary tremendously. Sadhus live in ashrams and temples in the midst of major urban centers, in huts on the edges of villages, in caves in the remote mountains. Others live lives of perpetual pilgrimage, moving without ceasing from one town, one holy place, to another. Some gurus live with one or two disciples; some ascetics are solitary, while others live in large, communal institutions. For some sadhus the brotherhood or sisterhood of ascetics is very important.

The rigor of the spiritual practices in which contemporary sadhus engage also varies a great deal. Apart from the very few that engage in the most dramatic, striking austerities—for example, standing on one leg for years on end or remaining silent for a dozen years—most sadhus engage in some form of religious practice: devotional worship, hatha yoga, fasting, etc. For many sadhus, the consumption of hashish or other forms of cannabis[9] is accorded a religious significance.[10] In fact, the highest quality hashish to be found in some Indian districts is often made by local Sadhus.[11]

Sadhus occupy a unique and important place in Hindu society, particularly in villages and small towns more closely tied to tradition. In addition to bestowing religious instruction and blessings to lay people, sadhus are often called upon to adjudicate disputes between individuals or to intervene in conflicts within families. Sadhus are also living embodiments of the divine, images of what human life, in the Hindu view, is truly about — religious illumination and liberation from the cycle of birth and death.

Though some ascetic sects possess properties that generate revenue to sustain members, most sadhus rely on the donations of lay people; poverty and hunger are ever-present realities for many sadhus.