Concordia Language Villages (CLV), previously the International Language Villages, is a world-language and culture education program whose mission is to prepare young people for responsible citizenship in our global community. Since beginning in 1961, it has grown to offer summer camp in 15 modern languages and school-year weekend programs mostly for Spanish, French and German program.[1] Summer and winter programs are taught through a language and cultural immersion philosophy, which allows for experience-based learning.[2] The Villages annually serves over 13,000 young people, aged 7–18,[3] from every state of the US, as well as Canada and 31 other countries,[4] and are sponsored by Concordia College of Moorhead, Minnesota, a private four-year liberal arts college of the Evangelical Lutheran Church in America. 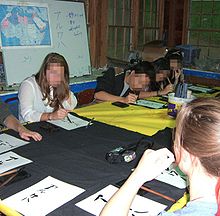 A cultural exchange evening program between Al-Waha and Mori no Ike, in which students of Arabic learn about Japanese culture and language in Japanese.

CLV's mission is to "prepare young people for responsible citizenship in our global community."[5]

Each village focuses on immersion in both the language and the culture(s) of its target. Counselors speak the target language from waking up to going to sleep, with the help of many communicative techniques designed to reduce frustration on the part of the villagers; villagers are encouraged to use as much of the target language as they can produce. By the end of the summer, even villagers with no previous encounters with the language remark on how much they are able to understand.

CLV also aims to develop cultural awareness. Everything from the meals to the crafts to the games is tailored to the target culture(s). Village programs are designed to cast light on the cultures in question, as well as the diversity of cultures around the world, and can take on inter-village meaning in everything from "World Cup" soccer matches between nearby villages to simulating the European Union deliberating on an issue. Additionally, at CLV villagers are able to live with, play with, work with, and get to know foreign native speakers. CLV also sponsors a "International Day" twice yearly; it is free and open to the public and aims to foster further global awareness.

Strong environmental goals encompass all aspects of the program, from recycling, waste reduction, water management, encouragement for campers to bring biodegradable toiletries, alternative energy sources like solar and geothermal power are implemented on the permanent site. The new Waldsee "BioHaus," the first certified passive house in North America,[6] is a testament to these goals. The villages also have a relatively high vegetarian and vegan ratio, to which they cater.[citation needed] 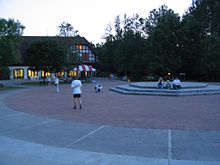 Waldsee Markplatz near Bemidji, Minnesota. The culturally-authentic Gasthof dining hall can be seen in the background.

There are architecturally and culturally authentic village sites (Finnish, French, German, Norwegian, Russian, and Spanish) located near Bemidji, Minnesota on Turtle River Lake. There are also leased sites throughout Minnesota, as well as at Savannah, Georgia, and abroad in Switzerland, and China.

The road connecting the permanent villages at Turtle River Lake to the county road was purposefully constructed to be winding, to simulate the long trip to the target cultures represented at the villages. The original plans for these villages included a train to link all of the villages. Although this idea was scrapped, aspects of it still remain in several buildings. The German village's four-story administration building resembles a German train station and is called the Bahnhof ("train station"). The dining hall at Salolampi, the Finnish language village, is modeled after a famous Finnish train station. Additionally, the Turtle River Lake site has a World Inc. Peace Site with peace poles in the village languages at its heart, near the Norwegian village, Skogfjorden and the Bemidji and Turtle River Lake sites have European road signs in kilometers per hour (imported from Germany, not replications).

Several immigrant buildings have been moved to the permanent sites to show villagers what life was like for early European immigrants. The immigrant cabins at the Norwegian village are original to the site. The German "Haus Sonnenaufgang" was first moved from New Ulm, Minnesota to sit next to the Norwegian ones, but was moved sometime in the early 1990s to the German village near Bemidji, Minnesota.

Each village is named "Lake of the Woods" in its language, with the exception of the English villages Hometown, USA and Hometown, Europe, the Portuguese village Mar E Floresta (Sea and Forest), and the Arabic village al-Wāḥa ("the oasis"). 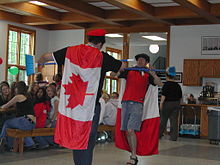 Skits are very important to the village experience.

Villagers use CLV-issued passports to manage their camp bank account and familiarize them with the use of a passport. Villagers also go through customs upon arrival.

Each language village site has numerous traditions, many of which are related to meals and songs. Meal presentations, in which each food and its name are presented in a short skit before each meal, are a language tool implemented by almost all programs. Many villages also put on a restaurant night for villagers to practice going out using their target language. Restaurants will often be fancy affairs that tend to represent international cuisine and languages that are not represented by the villages, such as Vietnamese, Indian, Thai, or Tibetan.

The cuisine in most villages reflect the ethnic cuisines of the target language. At Waldsee, this means that German regional food, Austrian, Swiss and common import foods like Turkish döner kebab are served. At Lac du Bois, foods of Africa and the Caribbean may be included.

The fusion of American and foreign cultures has created a strange linguistic phenomenon sometimes referred to as Lac du Bois's "Franglais" (French+anglais) or Waldsee's "Denglish" (Deutsch+English). Examples would be Je need a couteau ("I need a knife") or What did you seh at the Kino? ("What did you see at the movie theatre?"). This trend, however, is not limited to just the Lac du Bois and Waldsee camps, villagers at every camp employ a unique variety of code-switching with English and the target language. Site buildings are given names in the target language, and rarely does anyone refer to site buildings by their English names, even when speaking English. Additionally, some words have been invented by native-speaking staff members for concepts that are not native to the target cultures but daily words in camp life, such as "chipmunk," "poison ivy," and "mosquito repellent."

A typical day at one of the Villages includes cultural and typical summer camp activities. In the target language, villagers might go canoeing, create art projects, play African drums, practice yoga, play ping-pong, or make a film. Camp songs and daily skits are an integral part of the village experience, as are jokes, games, and weekend dances, all of which surround campers with the language.

Simulations play a major role in giving villagers the opportunity to experience historic events and situations in international affairs that affect world peace. Examples have included world religions, children’s rights, and tolerance. Comfort with the language, open-mindedness, and awareness of world citizenship are core values taught at Concordia Language Villages.

Villagers also can attend a four week program for high school credit. Obviously, the schedule for these villagers is slightly different. "A thematic curriculum, experiential immersion techniques and performance-based assessments are the basis for this academic program."[8] To earn the 180 hours to gain credit at a high school, villagers will attend 4 to 5 structured classes during the day. The credit villagers are in the immersion program and take part in "doing" foreign language, but unlike many of the 2 week programs, these villagers will also focus on reading and writing. Credit villagers still get to participate in many of the fun activities such as evening programs, sports, arts and crafts and other unique offerings in each village.

CLV offers a number of programs to serve its diverse audience, not all of which are offered in every language.

During the summer, CLV serves youth with villages in the United States, as well as a limited number of programs abroad for academic credit. Villagers can stay for 1 week, 2 weeks, or 4 week programs, and it is possible to earn high school or college credit for the time spent being immersed in the language. "Wilderness programs" during the summer offer additional opportunities to spend time in the outdoors of Minnesota for those who enjoy the environment, exploration, and camping. Many camps also offer other themed programs, such as French African or Swiss culture (which is a blend of the German, French, and Italian villages) or the Middle Ages in combination with theatre.[9]

Summer day camps are offered for younger learners who live in the area, and "family week" programs during the summer serve entire families, even those with young children.

Between September and June, CLV offers weeks and weekends of immersion for adults, elderhostelers, families, teachers, and school groups. These programs meet over weekends and long weekends, and each school year has a theme for its weekend.[10] 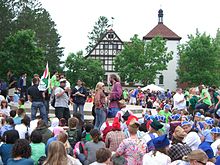 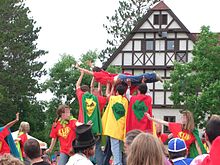 During each half of the summer, all the camps within driving distance travel to Waldsee,the German camp, for a day-long festival of cultures called International Day, or I-Day. The camps bring out their wares and each has a booth of ethnic food to share, and each camp prepares a short closing performance to share. Each year has a theme. Additionally, campers in every village learn a choreographed dance to the year's "I-Day song" during the two weeks preceding I-Day. This is a song from a language not covered by the camps; everyone dances to it together during the festival. All songs can be heard on You Tube.

Over the years, Concordia Language Villages has been visited by numerous dignitaries and supporters, including:

His Majesty King Harald V of Norway has granted royal patronage to Skogfjorden, the Norwegian Language Village. Patronage is an affirmation from the Royal Family of Norway of the quality educational programming of Concordia Language Villages.

In 2009, Tove Irene Dahl,the dean of Skogfjorden, was named a Knight of the First Class of the Royal Norwegian Order of Merit, by His Majesty King Harald V of Norway for the advancement of Norwegian language and culture in the United States.