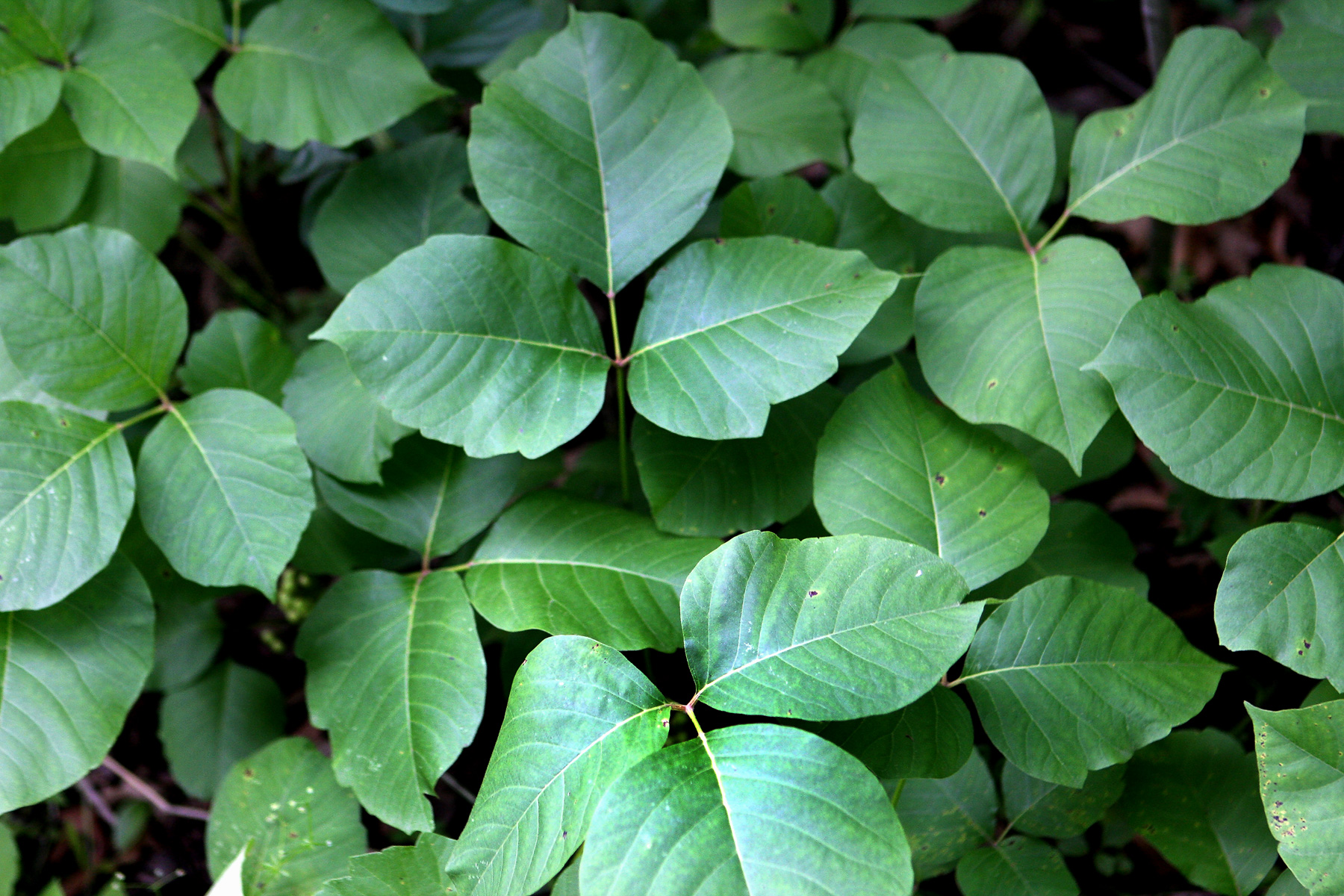 It grows throughout much of , including all Canadian provinces except Newfoundland (but not the Territories) and all U.S. states except , Hawai‘i, and , as well as in the mountainous areas of Mexico up to around 5,000 ft (see caquistle or caxuistle--the Nahua term), and is normally found in wooded areas, especially along edge areas. It also grows in exposed rocky areas and in open fields and disturbed areas. It also grows as a plant, although it is only somewhat shade tolerant. The plant is extremely common in suburban and exurban areas of New England, the Mid-Atlantic and Southeastern United States. It rarely grows at altitudes above 1,500 meters (5,000 ft), although the altitude limit varies in different locations. The plants can grow as a shrub up to about 1.2 meters (4 ft) tall, as a 10–25 centimeters (4–10 in) high, or as a climbing vine on various supports. Older vines on substantial supports send out lateral branches that may at first be mistaken for tree limbs.

It is not particularly sensitive to , although it does not grow in or conditions. It grows in a wide variety of types, and from 6.0 (acidic) to 7.9 (moderately alkaline). It can grow in areas subject to seasonal or water.

It is more common now than when Europeans first entered North America. Real estate development adjacent to wild, undeveloped land has engendered "s," enabling poison ivy to form vast, lush colonies in such places. It is listed as a in the of and and the Canadian province of .

The leaves are ternate with three -shaped s. The (actually s) are a grayish-white color and are a favorite winter food of some birds. This is the basis of s such as "Leaves of three, let it be; leaves of four, eat some more"; variants include "... hairy vine, no friend of mine", [http://www.parks.ca.gov/pages/735/files/transcriptmtlivermoreangelisland.pdf Page 3.] "... berries white, run in fright" and "... berries white, danger in sight". [ [http://www.snpp.com/episodes/8F24.html Kamp Krusty ] ]

The color ranges from light green (usually the younger leaves) to dark green (mature leaves), turning bright red in fall; though other sources say leaves are red when young, turn green through maturity, then back to red, orange, or yellow in the fall. The leaflets of mature leaves are somewhat shiny. The leaflets are 3-12 cm long, rarely up to 30 cm. Each leaflet has a few or no teeth along its edge, and the leaf surface is smooth. Leaflet clusters are alternate on the vine, and the plant has no thorns. These three characteristics: (a) clusters of three leaflets, (b) alternate, and (c) lack of thorns, are sufficient to positively identify the plant. If it is growing up the trunk of a tree, the presence of copious root-hairs will identify it, [Petrides, George A. "A Field Guide to Trees and Shrubs" (Peterson Field Guides), Boston: Houghton Mifflin Co., 1986, p. 130.] leading to the "hairy vine, no friend of mine" warning.

Poison ivy spreads both vegetatively and sexually. The vines put down s, or the plant can spread from s or s. The plant flowers in May to July and produces mature fruits by August to November. Seeds are spread mainly by animals, and are viable after passing through the digestive tract of birds.

Effects on the body

The reaction caused by poison-ivy, , is an allergic reaction. Around 15% [ [http://science.howstuffworks.com/poison-ivy.htm Howstuffworks "How Poison Ivy Works" ] ] to 30% [ [http://mic-ro.com/plants/ Contact-Poisonous Plants of the World ] ] of people have no allergic response, but most if not all will become sensitized over time with repeated or more concentrated exposure to urushiol. Note that reactions that worsen over time may progress to and can therefore be dangerous, even life-threatening.

For those who are affected by urushiol, it causes a very irritating rash. In extreme cases, can be needed to treat rashes and severe itching. The first symptom of contact is a severe itching of the skin that develops into reddish colored inflammation or non-colored bumps, and then ing of the skin occurs. In severe cases, clear fluids ooze from open blistered sores. Once the urushiol poison has had contact with the skin, it is quickly bound to the skin.

The oozing fluids released by itching blisters do not spread the poison. The appearance of a spreading rash indicates that some areas received more of the poison and reacted sooner than other areas or that contamination is still occurring from contact with objects to which the original poison was spread. The blisters and oozing result from blood vessels that develop gaps and leak fluid through the skin; if the skin is cooled, the vessels constrict and leak less. If poison ivy is burned and the smoke then inhaled, this rash will appear on the lining of the lungs, causing extreme pain and possibly fatal respiratory difficulty. If poison ivy is eaten, the digestive tract, airway, kidneys or other organs can be damaged.

Understanding why new lesions may develop for two weeks (studied on forearm) after one exposure was made clear by a University of Miami scientist: larger amounts have earliest onset and largest reaction, smallest produce a delayed reaction. The overall severity 'progresses' with the combined active lesions. Therefore, the last new lesion should occur at two weeks after last exposure, the total rash (untreated) may go on for 3-4 weeks.

Urushiol oil can remain active for several years, so handling dead leaves or vines can cause a reaction. In addition, oil transferred from the plant to other objects (such as pet fur) can cause the rash if it comes into contact with the skin. [ [http://www.aad.org/public/Publications/pamphlets/Poison_IvyOakSumac.htm Poison Ivy, Oak & Sumac ] ]

People who are sensitive to poison-ivy can also experience a similar rash from . Mangoes are in the same family () as poison ivy; the sap of the mango tree and skin of mangoes has a chemical compound similar to urushiol. [ [http://content.nejm.org/cgi/content/extract/339/4/235 Mangos and Poison Ivy] (New England Journal of Medicine Web Article)]

Similar reactions have been reported occasionally from contact with the related aromatic sumac or Japanese lacquer tree.

Confusion with other plants

*Boxelder Maple ("") saplings can look almost indistinguishable from poison ivy. While Boxelder Maples often have five or seven leaflets, three leaflets are also common. The two can be differentiated by the fact that Poison-ivy has alternate leaves, while the maple has opposite leaves; in other words, by observing where the leaf stalk (the "branch" the three leaflets are attached to) meets the main branch. Another leaf stalk directly on the opposite side is characteristic of Boxelder Maple. If the three-leaflet leaves alternate along the main branch, it may be Poison-ivy.

* ("Parthenocissus quinquefolia") vines can look like Poison-ivy. The younger leaves can consist of three leaflets but have a few more serrations along the leaf edge, and the leaf surface is somewhat wrinkled. However, most Virginia creeper leaves have five leaflets. Virginia creeper and poison ivy very often grow together, even on the same tree. Beware that even people who do not get poison ivy may be allergic to the oxalate crystals that are in its sap.

*Western Poison-oak ("Toxicodendron diversilobum‎") leaflets also come in threes on the end of a stem, but each leaflet is shaped somewhat like an leaf. Western Poison-oak only grows in the western United States and Canada, although many people will refer to poison ivy as poison-oak. This is because poison ivy will grow in either the ivy-like form or the brushy oak-like form depending on the moisture and brightness of its environment. The ivy form likes shady areas with only a little sun, tends to climb the trunks of trees, and can spread rapidly along the ground.

* ("Pueraria lobata") is a non-toxic edible vine that scrambles extensively over lower vegetation or grows high into trees. Kudzu is an in the southern United States. Like poison ivy it has three leaflets, but the leaflets are bigger than those of poison ivy and are pubescent underneath with hairy margins.

* and vines bear a passing resemblance to poison ivy, with which they may share territory. The chief difference between blackberry vines and poison ivy is that blackberry vines have spines on them, whereas poison ivy is smooth. Also, the three-leaflet pattern of blackberry vine leaves changes as the plant grows: the two bottom leaves both split into two leaves, for a total of five in a cluster. They have many teeth along the leaf edge, and the top surface of their leaves is very wrinkled where the veins are, and the bottom of the leaves is light minty - greenish white, while poison ivy is all green. The stem and vine of poison ivy are brown and woody, while blackberry stems are green with thorns.

*The thick vines of grape, with no rootlets visible, differ from the vines of poison ivy, which have so many rootlets that the stem going up a tree looks furry.