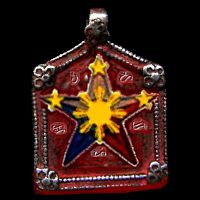 The deities of Philippine mythology are the gods, goddesses and diwatas worshiped by ancient Filipinos before the Christianization of the natives after the Spanish conquest of the Philippines. While not as widely known as its European and Asian counterparts, they have similar elements and characteristics when compared to other mythologies.

Ancient Philippine mythology varies among the many indigenous tribes of the Philippines. Some tribes during the pre-Spanish era believed in a single supreme being alongside with the lesser divinities who created the world and everything in it while others chose to worship a multitude of trees as an act of animism. Below are some of the gods and goddesses of the various ancient Philippine tribes:

This section includes the deities of the Ancient Tagalogs from a certain pantheon story. The first part as shown below were the residents of Kaluwalhatian (Ancient Tagalogs counterpart of Christian's Heaven).[1]

The list includes the god/goddess-like, residents of Kasamaan (Ancient Tagalogs counterpart of Hell). They were the evil entities all opposed to Bathala and the rest of his deities.[1]

The list includes the gods and goddesses who don't have a unified pantheon within the Tagalog deities mentioned in Table #1.

This section includes the deities of the Visayans from a certain pantheon story.[18]

The list includes the gods and goddesses who haven't have a unified pantheon within the Visayan deities mentioned in Table #5.

Other mythological creatures are:

The Ilokanos believed that man had three souls.

There are also lesser gods in the Batak pantheon, some of whom are Siabuanan, Bankakah, Paraen, Buengelen, and Baybayen. They are deities of great strength.

The spiritual world of the Isneg is populated by more than 300 anito (spirits) who assume various forms. There are actually no gods or hierarchical deities in the otherworld of the Isneg, only good or bad spirits.

There are spirits who come to help the reapers in gathering the harvest. They are known as Abad, Aglalannawan, Anat, Binusilan, Dawiliyan, Dekat, Dumingiw, Imbanon, Gimbanona, Ginalinan, Sibo, and a group of sky dwellers collectively known as the Ilanit.

Minaden – The goddess who creates of the world, had a brother named Tulus, also called Meketefu and Sualla.

Tulus - Is the chief of all good spirits who bestow gifts and favors upon human beings. He goes around with a retinue of messengers called telaki. Tulus is said to have rectified some errors in the first creation of the world and of human beings.

Mahal na Makaako – The Supreme Being who gave life to all human beings merely by gazing at them.

Binayi – Owner of a garden where all spirits rest.

Binayo - Is a sacred female spirit, caretaker of the rice spirits or the kalag paray. She is married to the spirit Bulungabon. The kalag paray must be appeased, to ensure a bountiful harvest. It is for this reason that specific rituals are conducted in every phase of rice cultivation. Some of these rituals include the panudlak, the rite of the first planting; the rite of rice planting itself; and the rites of harvesting which consist of the magbugkos or binding rice stalks, and the pamag-uhan, which follows the harvest.

Bulungabon – The spirit aided by 12 fierce dogs. Erring souls are chased by these dogs are eventually drowned in a caldron of boiling water. He is Binayo’s husband.

Bagatulayan – The Supreme Being and Creator of the world. He lives and rules the celestial realm, directing its activities.

Kadaklan - Is a deity subordinate to Bagatulayan. He is a friendly spirit who teaches the Tinguian how to pray, harvest their crops, ward off evil spirits, and overcome bad omens and cure sicknesses.

Apadel or Kalagang - A deity who is known to be the guardian and dweller of the spirit-stones called pinaing which play an important role in the spiritual world of the Tinguian. Of various sizes and shapes, the pinaing are usually found in sports marked out as hallowed ground, often under old trees, and are deemed to be the protectors of such places and of the creatures who live in the forests.

Makaboteng (one who frightens) – A benevolent spirit who dwells in the natural surroundings, believed to be the guardian of the deer and the wild pigs.

Dadagunan hu Suguy – A house spirit who guard of the lawn of the house.

Anilaw ha Sumagda – A house spirit, the guard of the door.

Sinyuda Kahibunan – A house spirit, the keeper of the hall.

Diwata Pinatanlay – A house spirit who guard the house at the ridge of the roof.

Nanolay - Is both creator of all things and a culture hero. In the latter role, he is a beneficent deity. Nanolay is described in myth as a fully benevolent deity, never inflicting pain or punishment on the people. He is responsible for the origin and development of the world.

Dasal - To whom the epic warriors Biwag and Malana prayed for strength and courage before going off to their final battle.

Bunag - The god of the earth.

Limat - The god of the sea.

Mah-nongan - The chief god generally refer to as the honorary dead and creator of all things, even though Ifugaos do not consider any of their deities as supreme.

Liddum - Is regarded as the chief mediator between the people and the other gods.

Monlolot - The winder of thread on the spindle, one of the twenty-three different deities preside over the art of weaving.

Mamiyo - Stretcher of skeins, one of the twenty-three different deities preside over the art of weaving.

Bumigi - In charge of worms, one of the eleven beings importuned to stamp out rice pests.

Lumadab - Has the power to dry up the rice leaves, one of the eleven beings importuned to stamp out rice pests.

Ampual - Of the Fourth Skyworld, is the god who bestowed animals and plants on the people and who controls the transplanting of rice. He is one of those gods who expects gifts in return for his blessings.

Wigan - Is the god of good harvest.

Yogyog and Alyog - Cause the earth to quake. They dwell in the underworld.

Abal – He and his brother Cain are the creators and guardian lords of all things. They are benevolent and their particular care is that of the people who live on earth. They are invincible and live in the sky Taon, sometimes on the sun Elag, or the moon Dalan, or perchance some star Pandac. Their messengers are called Binangunan or Cabuligian. Cain and Abal travel from place to place. Their road is called Keat (lightning). Kidu (thunder) follows the road. In the beginning, Cain and Abal lived together in the sky; but they had a quarrel and separated, as Abal wanted to live on earth where he could herd his animals. He was the one who created the lowlanders, who have the use of his carabaos and other animals.

Cain - Created all the mountain people, including the Ilongots. He gave them their customs, which they have followed throughout the centuries. He was a killer and a head-hunter; so they are also. Abal is stronger and more powerful than Cain and so there are more lowlanders than mountain people.

Oden – The rain, they worship him (it) for its life-giving water.

Elag - The sun, they worship him (it) so as the moon and stars because they give life and growth. He has a great, magnificent house in Gacay. When he gets tired giving light and goes into his house, it is night.

Delan - The moon, usually he and Elag are congenial and take turns giving light; but sometimes they quarrel and Elag covers Delan more or less with a great, huge winnowing biga-o (basket). Thus we have the different phases of the moon.

Gemang - The guardian of wild beasts. When a party of men is starting on a hunt, they build a fire, take hold of the dogs and the weapons and pass them one by one through the smoke. The last dog to be passed through the smoke is the leader of the pack. After taking it out of the smoke, the owner spits on its face, and rubs the saliva down its back and sides. Meanwhile, he has been talking and shouting to Gemang, saying: “Do not let our dogs get sick. You must give us one of your animals. Do not take the form of a wild beast so that the dogs chase you by mistake. If you will let the dogs catch one beast, then we will give you to eat and drink and likewise your wife.” Following this ceremony, the part starts out in a successful hunt.

Lampong - The dwarf shepherd of the wild animals.

There are four manifestations of the "great creator" who rules the world: Tigbalog is the source of life and action; Lueve takes care of production and growth; Amas moves people to pity, love, unity, and peace of heart; while Binangewan is responsible for change, sickness, and death.

Kedes - The god of the hunt.

Pawi - The god of the forest.

Sedsed - The god of the sea.

Aside from the gods and goddesses, ancient Filipinos also worshiped numerous forest deities known as diwatas (Filipinos counterpart of nymphs/enchanter or enchantress). There are lot of diwatas in the Philippine mythology and folklore but this section includes only the list of well-known.