In chemical engineering, chemical reactors are vessels designed to contain chemical reactions. The design of a chemical reactor deals with multiple aspects of chemical engineering. Chemical engineers design reactors to maximize net present value for the given reaction. Designers ensure that the reaction proceeds with the highest efficiency towards the desired output product, producing the highest yield of product while requiring the least amount of money to purchase and operate. Normal operating expenses include energy input, energy removal, raw material costs, labor, etc. Energy changes can come in the form of heating or cooling, pumping to increase pressure, frictional pressure loss (such as pressure drop across a 90o elbow or an orifice plate), agitation, etc.

Chemical reactor with half coils wrapped around it

There are a couple main basic vessel types:

Both types can be used as continuous reactors or batch reactors. Most commonly, reactors are run at steady-state, but can also be operated in a transient state. When a reactor is first brought back into operation (after maintenance or inoperation) it would be considered to be in a transient state, where key process variables change with time. Both types of reactors may also accommodate one or more solids (reagents, catalyst, or inert materials), but the reagents and products are typically liquids and gases.

There are three main basic models used to estimate the most important process variables of different chemical reactors:

Furthermore, catalytic reactors require separate treatment, whether they are batch, CST, or PF reactors, as the many assumptions of the simpler models are not valid. 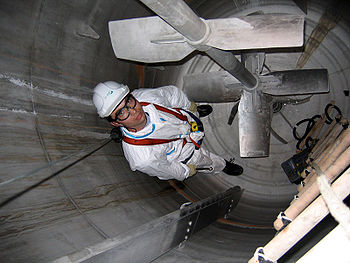 Reactor CSTR. Check of a condition of the case. Note the impeller (or agitator) blades on the shaft for mixing. Also note the baffle at the bottom of the image which also helps in mixing.

In a CSTR, one or more fluid reagents are introduced into a tank reactor equipped with an impeller while the reactor effluent is removed. The impeller stirs the reagents to ensure proper mixing. Simply dividing the volume of the tank by the average volumetric flow rate through the tank gives the residence time, or the average amount of time a discrete quantity of reagent spends inside the tank. Using chemical kinetics, the reaction's expected percent completion can be calculated. Some important aspects of the CSTR:

The behavior of a CSTR is often approximated or modeled by that of a Continuous Ideally Stirred-Tank Reactor (CISTR). All calculations performed with CISTRs assume perfect mixing. If the residence time is 5-10 times the mixing time, this approximation is valid for engineering purposes. The CISTR model is often used to simplify engineering calculations and can be used to describe research reactors. In practice it can only be approached, in particular in industrial size reactors. 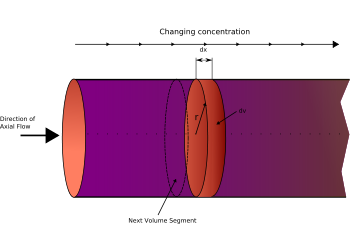 In a PFR, one or more fluid reagents are pumped through a pipe or tube. The chemical reaction proceeds as the reagents travel through the PFR. In this type of reactor, the changing reaction rate creates a gradient with respect to distance traversed; at the inlet to the PFR the rate is very high, but as the concentrations of the reagents decrease and the concentration of the product(s) increases the reaction rate slows. Some important aspects of the PFR:

For most chemical reactions, it is impossible for the reaction to proceed to 100% completion. The rate of reaction decreases as the percent completion increases until the point where the system reaches dynamic equilibrium (no net reaction, or change in chemical species occurs). The equilibrium point for most systems is less than 100% complete. For this reason a separation process, such as distillation, often follows a chemical reactor in order to separate any remaining reagents or byproducts from the desired product. These reagents may sometimes be reused at the beginning of the process, such as in the Haber process.

Continuous oscillatory baffled reactor (COBR) is a tubular plug flow reactor. The mixing in COBR is achieved by the combination of fluid oscillation and orifice baffles, allowing plug flow to be achieved under laminar flow conditions with the net flow Reynolds number just about 100.]]

A semi-batch reactor is operated with both continuous and batch inputs and outputs. A fermenter, for example, is loaded with a batch, which constantly produces carbon dioxide, which has to be removed continuously. Analogously, driving a reaction of gas with a liquid is usually difficult, since the gas bubbles off. Therefore, a continuous feed of gas is injected into the batch of a liquid.One chemical reactant is charged to the vessel and a second chemical is added slowly.

Although catalytic reactors are often implemented as plug flow reactors, their analysis requires more complicated treatment. The rate of a catalytic reaction is proportional to the amount of catalyst the reagents contact. With a solid phase catalyst and fluid phase reagents, this is proportional to the exposed area, efficiency of diffusion of reagents in and products out, and turbulent mixing or lack thereof. Perfect mixing cannot be assumed. Furthermore, a catalytic reaction pathway is often multi-step with intermediates that are chemically bound to the catalyst; and as the chemical binding to the catalyst is also a chemical reaction, it may affect the kinetics.

The behavior of the catalyst is also a consideration. Particularly in high-temperature petrochemical processes, catalysts are deactivated by sintering, coking, and similar processes.

A common example of a catalytic reactor is the catalytic converter following an engine.