The continuous stirred-tank reactor (CSTR), also known as vat- or backmix reactor, is a common ideal reactor type in chemical engineering. A CSTR often refers to a model used to estimate the key unit operation variables when using a continuous[†] agitated-tank reactor to reach a specified output. (See Chemical reactors.) The mathematical model works for all fluids: liquids, gases, and slurries.

The behavior of a CSTR is often approximated or modeled by that of a Continuous Ideally Stirred-Tank Reactor (CISTR). All calculations performed with CISTRs assume perfect mixing. In a perfectly mixed reactor, the output composition is identical to composition of the material inside the reactor, which is a function of residence time and rate of reaction. If the residence time is 5-10 times the mixing time, this approximation is valid for engineering purposes. The CISTR model is often used to simplify engineering calculations and can be used to describe research reactors. In practice it can only be approached, in particular in industrial size reactors.

Integral mass balance on number of moles Ni of species i in a reactor of volume V. [accumulation] = [in] − [out] + [generation] 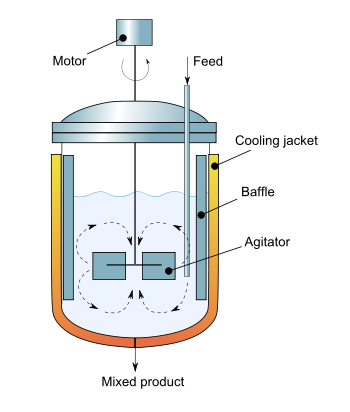 where Fio is the molar flow rate inlet of species i, Fi the molar flow rate outlet, and νi stoichiometric coefficient. The reaction rate, r, is generally dependent on the reactant concentration and the rate constant (k). The rate constant can be determined by using a known empirical reaction rates that is adjusted for temperature using the Arrhenius temperature dependence. Generally, as the temperature increases so does the rate at which the reaction occurs. Residence time, τ, is the average amount of time a discrete quantity of reagent spends inside the tank.

NA = CA V (where CA is the concentration of species A, V is the volume of the reactor, NA is the number of moles of species A)

The values of the variables, outlet concentration and residence time, in Equation 2 are major design criteria.

CSTR's are known to be one of the systems which exhibit complex behavior such as steady-state multiplicity, limit cycles and chaos.

The actual reaction volume will be affected by the non-uniform mixing (short-circuiting) or existence of dead zone areas. Temperature effect will also cause significant effect on the reaction rate.