A magnetic circuit is made up of one or more closed loop paths containing a magnetic flux. The flux is usually generated by permanent magnets or electromagnets and confined to the path by magnetic cores consisting of ferromagnetic materials like iron, although there may be air gaps or other materials in the path. Magnetic circuits are employed to efficiently channel magnetic fields in many devices such as electric motors, generators, transformers, relays, lifting electromagnets, SQUIDs, galvanometers, and magnetic recording heads.

Some examples of magnetic circuits are:

around a closed loop is defined as:

The MMF represents the potential that a hypothetical magnetic charge would gain by completing the loop. The magnetic flux that is driven is not a current of magnetic charge; it merely has the same relationship to MMF that electric current has to EMF. (See microscopic origins of reluctance below for a further description.)

The unit of magnetomotive force is the ampere-turn (At), represented by a steady, direct electric current of one ampere flowing in a single-turn loop of electrically conducting material in a vacuum. The gilbert (Gi), established by the IEC in 1930 [1], is the CGS unit of magnetomotive force and is a slightly smaller unit than the ampere-turn. The unit is named after William Gilbert (1544–1603) English physician and natural philosopher.

of long coil is:

where N is the number of turns and I is the current in the coil. In practice this equation is used for the MMF of real inductors with N being the winding number of the inducting coil.

For a magnetic component the area S used to calculate the magnetic flux Φ is usually chosen to be the cross-sectional area of the component.

In electronic circuits, Ohm's law is an empirical relation between the EMF

applied across an element and the current I it generates through that element. It is written as:

where R is the electrical resistance of that material. Hopkinson's law is a counterpart to Ohm's law used in magnetic circuits. The law is named after the British electrical engineer, John Hopkinson. It states that[1][2]

is the magnetic reluctance of that element. (It shall be shown later that this relationship is due to the empirical relationship between the H-field and the magnetic field B, B=μH, where μ is the permeability of the material.) Like Ohm's law, Hopkinson's law can be interpreted either as an empirical equation that works for some materials, or it may serve as a definition of reluctance.

The definition can be expressed as:

is the reluctance in ampere-turns per weber (a unit that is equivalent to turns per henry).

Magnetic flux always forms a closed loop, as described by Maxwell's equations, but the path of the loop depends on the reluctance of the surrounding materials. It is concentrated around the path of least reluctance. Air and vacuum have high reluctance, while easily magnetized materials such as soft iron have low reluctance. The concentration of flux in low-reluctance materials forms strong temporary poles and causes mechanical forces that tend to move the materials towards regions of higher flux so it is always an attractive force(pull).

The inverse of reluctance is called permeance.

Its SI derived unit is the henry (the same as the unit of inductance, although the two concepts are distinct).

The reluctance of a magnetically uniform magnetic circuit element can be calculated as:

This is similar to the equation for electrical resistance in materials, with permeability being analogous to conductivity; the reciprocal of the permeability is known as magnetic reluctivity and is analogous to resistivity. Longer, thinner geometries with low permeabilities lead to higher reluctance. Low reluctance, like low resistance in electric circuits, is generally preferred.[citation needed]

Summary of analogy between magnetic circuits and electrical circuits

Limitations of the analogy

When using the analogy between magnetic circuits and electric circuits, the limitations of this analogy must be kept in mind. Electric and magnetic circuits are only superficially similar because of the similarity between Hopkinson's law and Ohm's law. Magnetic circuits have significant differences, which must be taken into account in their construction: 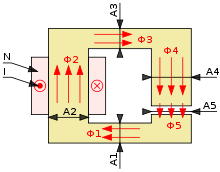 Magnetic circuits obey other laws that are similar to electrical circuit laws. For example, the total reluctance

This also follows from Ampère's law and is analogous to Kirchhoff's voltage law for adding resistances in series. Also, the sum of magnetic fluxes

into any node is always zero:

This follows from Gauss's law and is analogous to Kirchhoff's current law for analyzing electrical circuits.

Together, the three laws above form a complete system for analysing magnetic circuits, in a manner similar to electric circuits. Comparing the two types of circuits shows that:

Magnetic circuits can be solved for the flux in each branch by application of the magnetic equivalent of Kirchhoff's Voltage Law (KVL) for pure source/resistance circuits. Specifically, whereas KVL states that the voltage excitation applied to a loop is equal to the sum of the voltage drops (resistance times current) around the loop, the magnetic analogue states that the magnetomotive force (achieved from ampere-turn excitation) is equal to the sum of MMF drops (product of flux and reluctance) across the rest of the loop. (If there are multiple loops, the current in each branch can be solved through a matrix equation—much as a matrix solution for mesh circuit branch currents is obtained in loop analysis—after which the individual branch currents are obtained by adding and/or subtracting the constituent loop currents as indicated by the adopted sign convention and loop orientations.) Per Ampère's law, the excitation is the product of the current and the number of complete loops made and is measured in ampere-turns. Stated more generally:

More complex magnetic systems, where the flux is not confined to a simple loop, must be analysed from first principles by using Maxwell's equations.

The term reluctance was coined in May 1888 by Oliver Heaviside.[3] The notion of “magnetic resistance” was first mentioned by James Joule [4] and the term "magnetomotive force” (MMF) was first named by Bosanquet.[5] The idea for a magnetic flux law, similar to Ohm's law for closed electric circuits, is attributed to H. Rowland.[6]

Reluctance can also be applied to: