Bithynia tentaculata, common names the mud bithynia or common bithynia, or faucet snail[4] is a relatively small species of freshwater snail with gills and an operculum, an aquatic prosobranch gastropod mollusk in the family Bithyniidae.

The width of the shell is 5–7 mm.[citation needed]

The faucet snail has a shiny pale brown shell, oval in shape, with a relatively large and rounded spire consisting of 5–6 somewhat flattened whorls, no umbilicus, and a very thick lip.[3][5][8] The aperture is less than half the height of the shell.[8]

Adult Bithynia tentaculata possess a white, calcareous, tear-drop to oval-shaped operculum with distinct concentric rings.[3][7][8] The operculum of juveniles, however, is spirally marked.[3] The operculum is always located very close to the aperture of the shell.[3] The animal itself has pointed, long tentacles and a simple foot with the right cervical lobe acting as a channel for water.[3] 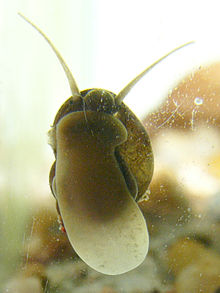 Bithynia tentaculata is nonindigenous in the United States[4] and in Canada.

Great Lakes Region: Bithynia tentaculata was first recorded in Lake Michigan in 1871, but was probably introduced in 1870.[14] It spread to Lake Ontario by 1879, the Hudson River by 1892, and other tributaries and water bodies in the Finger Lakes region during the 20th century.[3][14] It was introduced to Lake Erie sometime before 1930.[15][16] This snail’s range extends in 1992 from Quebec and Wisconsin to Pennsylvania and New York.[3] It has been recorded from Lake Huron, but only a few individuals were found in benthic samples from Saginaw Bay in the 1980s and 1990s.[17]

In the Mid-Atlantic Region it is found in Lake Champlain, widespread across New York, Potomac River in Virginia. Established in Chesapeake Bay, Maryland (Ruiz 2000).[citation needed]

Commonly found in freshwater ponds, shallow lakes, and canals. This species is found on the substrate in fall and winter (including gravel, sand, clay, mud or undersides of rocks) and on aquatic macrophytes (including milfoil, Myriophyllum spicatum and muskgrass, Chara spp.) in warmer months.[3][7] [18] It lives mostly in shoals, but is found at depths up to 5 m.[3] Bithynia tentaculata can inhabit intertidal zones in the Hudson River[3] In general, the faucet snail inhabits waters with pH of 6.6–8.4, conductivity of 87–2320 μmhos/cm, Ca2+ of 5–89 ppm, and Na+ of 4–291 ppm.[3] It can potentially survive well in water bodies with high concentrations of K+ and low concentrations of NO3-.[3] In the Saint Lawrence River, it tends to occur in relatively unpolluted, nearshore areas[19] and amongst dreissenid mussel beds.[20]

This species functions as both a scraper and a collector-filterer, grazing on algae on the substrate, as well as using its gills to filter suspended algae from the water column. When filter feeding, algae is sucked in, condensed, and then passed out between the right tentacle and exhalant siphon in pellet-like packages which are then eaten.[3] The ability to filter feed may play a role in allowing populations of the faucet snail to survive at high densities in relatively eutrophic, anthropogenically influenced water bodies.[3] Bithynia tentaculata feeds selectively on food items.[21] The faucet snail is known in Eurasia to feed on black fly larvae.[22]

Bithynia tentaculata is dioecious (it has two separate sexes) and lays its eggs on rocks, wood and shells in organized aggregates arranged in double rows, in clumps of 1–77. Egg-laying occurs from May to July when water temperature is 20°C or higher, and sometimes a second time in October and November by females born early in the year. The density of eggs on the substrate can sometimes reach 155 clumps/m2. Fecundity may reach up to 347 eggs and is greatest for the 2nd year class. Eggs hatch in three weeks to three months, depending on water temperature. Oocytes develop poorly at temperatures of 30 - 34°C. Growth usually does not occur from September to May. The lifespan varies regionally and can be anywhere from 17 – 39 months.[3][23]

The faucet snail has the potential to be a good biomonitor for contaminants such as Cd, Zn, and methylmercury (MeHg) because there are good correlations between environmental concentrations and snail tissue concentrations with respect to these toxic compounds.[24][25]

In its native Eurasian habitat, the faucet snail is host to many different species of digeneans, cercariae, metacercariae, cysticercoids, and other parasites.[26][27][28]

Natural dispersal of this snail is known to occur by passive transport in birds.[36]

Bithynia tentaculata is capable of detecting the presence of molluscivorous leeches through chemoreception and of closing its operculum to avoid predation.[37]