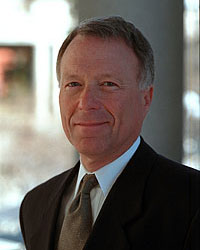 Making false statements
penalty=30 months in prison (commuted by President )
$250,000 fine
Two years of supervised release, including 400 hours of community service
status=convicted (of four of five charges)
place_of_death=
occupation=unemployed; former (1976–2007; suspended from the practice of law in and in 2007; disbarred by the D.C. Court of Appeals on , )
policy advisor (2006–2007)
Government official and policy advisor (1981–2005)
spouse=
parents=
children=Two
Religion=Jewish

Irve Lewis "Scooter" Libby (born ) is a former Assistant to the , , Chief of Staff to the , , and Assistant to the Vice President for National Security Affairs, serving from 2001 to 2005. [cite web
url=http://www.prospect.org/cs/articles?articleId=11423
title=Vice Squad
last=Dreyfuss
first=Robert
publisher=The American Prospect
date=2006-04-17
accessdate=2008-07-01]

In "United States v. Libby", the jury convicted Libby on four of the five counts in the indictment: one count of ; two counts of ; and one count of making false statements to federal investigators.

On , , the presiding trial judge, Reggie B. Walton, sentenced Libby to 30 months in federal prison, a fine of $250,000, and two years of supervised release, including 400 hours of community service,

On , , Libby's lawyers announced that he would drop his appeal of his conviction in "the CIA leak case," leaving intact his remaining sentence and fine and leaving on his record his conviction, unless he were granted a full Presidential pardon.

Libby was born to an affluent family in ; his late father, Irving (or Irve) Lewis Liebowitz, was an investment banker.

Libby graduated from the , in , a middle school, in 1965, according to his old friend, former roommate, and debating team co-captain Nick Bromell, who is now professor of English and director of graduate studies at the in .

He and his older brother, Hank, "a retired tax lawyer," Shane reports, "were the first in the family to graduate from college."

Libby is married to , whom he met in , in the late 1980s while he was a partner and she an associate in the law firm then known as Dickstein, Shapiro, and Morin: "'When he and Harriet became serious,' Dickstein partner Kenneth Simon wrote, 'she chose to leave the firm rather than maintain the awkward situation of an associate dating a partner.'"

Libby was a litigation associate at the Philadelphia law firm of , but left to work in Washington for . He later became a partner and head of the Washington, DC office of the Philadelphia law firm of . His first criminal defense lawyer in the Plame leak case was Joseph Tate, a Dechert partner, who had been an acquaintance of Libby's at the Schnader law firm in Philadelphia, where Libby was an associate and Tate was a litigation partner.

At times, according to various news accounts, and as documented in a federal directory cited by and others, Libby has used "Jr." after his name.

In their February 2002 interview on "", King asked Libby specifically, "Where did 'Scooter' come from?"; Libby replied: "Oh, it goes way back to when I was a kid. Some people ask me if ... [crosstalk] ... as you did earlier, if it's related to [nicknamed 'The Scooter'] . I had the range but not the arm."

Just prior to and after his indictment in the on , , others in the news media gave various, sometimes contradictory, accounts of his first name, its spelling, and the origin of his nickname "Scooter" (sometimes citing, with or without attribution, information conveyed earlier by Schmitt's 2001 telephone interview with Libby's older brother Hank and King's 2002 television interview with Libby).

Libby's first and only novel, "The Apprentice", about a group of travelers stranded in northern in the winter of 1903 during a epidemic, was first published in a edition, by , in , in 1996 and reprinted as a , by St. Martin's Thomas Dunne Books, in 2002. After Libby's indictment in the , in 2005, St. Martin's Press reissued "The Apprentice" as a (Griffin imprint).

After earning his J.D. from Columbia in 1975, Libby joined the firm of , becoming a partner the following year, in 1976.

Libby practiced law at Schnader for six years before joining the U.S. State Department policy planning staff, at the invitation of his former Yale professor, , in 1981.

In 1993, returning to private legal practice from government, Libby became the managing partner of the office of (formerly Nixon, Mudge, Rose, Guthrie, and Alexander); in 1995, along with his Mudge Rose colleague, ––who had replaced as acting Special Counsel to U.S. President for the last two years of his presidency dominated by , and who had hired Libby at Mudge Rose twenty years later––and three other lawyers from that firm, Libby joined the office of Dechert, Price, and Rhoads (now part of Dechert LLP), where he was a managing partner, a member of its litigation department, and chaired its Public Policy Practice Group, until 2001, when he left to return to work again in government, as Vice President Cheney's chief of staff.

Fugitive billionaire commodities trader , who, along with his business partner , had been convicted of and illegal trading with , and who, with Green, was ultimately ed by President , was a client whom had hired Libby to help represent around the spring of 1985, after Rich and Green had first engaged Garment.

Before his indictment in United States v. Libby, Libby had been a licensed , admitted to the bars of the and the , although his Pennsylvania law license was inactive, and he had already been suspended from the Office of Bar Counsel (D.C. Bar) for non-payment of fees.

In 1981, after working as a lawyer in the Philadelphia firm Schnader LLP, Libby accepted the invitation of his former political science professor and mentor to join the U.S. State Department's policy planning staff.

During the , Libby was confirmed by the U.S. Senate as deputy under secretary of defense for policy, serving from 1992–1993.

After becoming Cheney's chief of staff in 2001, Libby was reportedly nicknamed "Germ Boy" at the White House, for insisting on universal .

Libby was also actively involved in the Bush administration's efforts to negotiate the Israeli-Palestinian "road map" for peace; for example, he participated in a series of meetings with ish leaders in early December 2002 and a meeting with two aides of then-Israeli Prime Minister in mid-April 2003, culminating in the Red Sea Summit on , .

....neoconservatism "is" an episode, an important and interesting one, in the intellectual and political history of Jewish America, and it is impudent to call anyone who mentions this a bigot. Schoenfeld suggests that only racist crackpots ever query the commitment of senior Washington officials, but it was , himself a descendant of Jewish immigrants, who said of Lewis Libby, Vice-President Dick Cheney's chief of staff: "It's a toss-up whether Libby is working for the Israelis or the Americans on any given day."

Kampfner's book contains some wonderful vignettes. He describes how badly the Blair camp gets on with Vice-President and his office, and particularly with Lewis Libby, Cheney's chief of staff, who is close to 's party. In 2002, while was having a difficult trip in the Middle East, he complained to that always seemed to have advance notice of the US position. Kampfner reports that Straw later remarked, "It is a toss up whether Libby is working for the Israelis or the Americans on any given day."

] In their highly-controversial and widely-contested "Working Paper" entitled "The Israel Lobby and U.S. Foreign Policy", political science professor and academic dean of the at argue that Libby was among the Bush administration's most "fervently pro-Israel ... officials" (20).