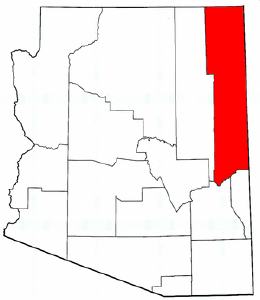 Apache County is located in the northeast corner of the of . As of the 2000 census its population was 69,423. The is St. Johns.

Apache County contains parts of the Navajo Indian Reservation, the , and . is entirely within the county.

A history of the area, written in 1896, records the following about Apache County.

:Apache County was created in 1879 and lies in the northeastern corner of the Territory. Until March, 1895, it also embraced what is now Navajo County, but at that date the latter was set apart and established as a separate county. Apache County is justly noted for its great natural resources and advantages. It is destined some day in the early future to have a large agricultural population. Now, immense herds of cattle and flocks of sheep roam over its broad mesas and its fertile valleys. The Navajo Indians occupy the northern part of the county-in fact, occupy much of the remainder of the county, as they refuse to remain on their reservation, preferring to drive their sheep and cattle on lands outside their reservation, where the grazing is better. The southern part is a fine grazing country, while the northern part is cut up into picturesque gorges and canons by the floods of past centuries.Fact|date=July 2008

In the late 1880s, the county was . At that time, the county covered more than 21,177 square miles in territory. In September, 1887, near Holbrook in what is now Navajo County, Owens was involved in one of the Old West's most famous gunfights, when he killed three men and wounded a fourth while serving a warrant on outlaw Andy Blevins/Andy Cooper, an active participant in a raging , later dubbed the .

Apache County is one of only 38 county-level census divisions of the United States where the most spoken language is not English and one of only 3 where it is neither English nor Spanish. 58.32% of the population speak Navajo at home, followed by English at 38.34% and Spanish at 2.72%.

In addition several other schools, including charter schools and tribal schools operated by the 's Office of Education Programs, serve the county.