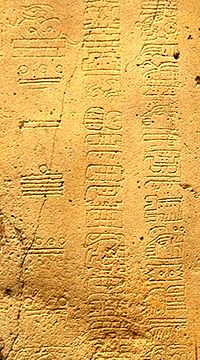 Detail showing three columns of glyphs from a portion of the 2nd century CE La Mojarra Stela 1. The left column gives a Long Count date of 8.5.16.9.7, or 156 CE. The two right columns visible are glyphs from the Epi-Olmec script.

The Haab' and the Tzolk'in calendars identified and named the days, but not the years. The combination of a Haab' date and a Tzolk'in date identifies a specific date in a combination which did not occur again for 52 years. The two calendars based on 365 days and 260 days repeat every 52 Haab' years, a period generally known as the Calendar Round. To designate dates over periods longer than 52 years, some Mesoamericans utilized the Long Count calendar.

The completion of 13 b'ak'tuns (August 11, 3114 BCE) marks the Creation of the world of human beings according to the Maya. On this day, Raised-up-Sky-Lord caused three stones to be set by associated gods at Lying-Down-Sky, First-Three-Stone-Place. Because the sky still lay on the primordial sea, it was black. The setting of the three stones centered the cosmos which allowed the sky to be raised, revealing the sun.[1]

The following table shows the period equivalents as well as Maya names for these periods:

Note that the name b'ak'tun is a back-formation invented by scholars. The numbered Long Count was no longer in use by the time the Spanish arrived in the Yucatán Peninsula, although unnumbered k'atuns and tuns were still in use.[citation needed] 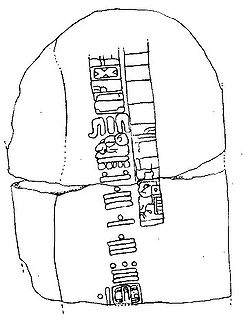 The back of Stela C from Tres Zapotes, an Olmec archaeological site.
This is the second oldest Long Count date yet discovered. The numerals 7.16.6.16.18 translate to September 1, 32 BCE (Gregorian). The glyphs surrounding the date are what is thought to be one of the few surviving examples of Epi-Olmec script.
See also: History of zero.

Long Count dates are written with Mesoamerican numerals, as shown on this table. A dot represents 1 while a bar equals 5. The shell glyph was used to represent the zero concept. The Long Count calendar required the use of zero as a place-holder, and presents one of the earliest uses of the zero concept in history.

On Maya monuments, the Long Count syntax is more complex. The date sequence is given once, at the beginning of the inscription, and opens with the so-called ISIG (Introductory Series Initial Glyph) which reads tzik-a(h) hab’ [patron of Haab' month] ("revered was the year-count with the patron [of the month]").[2] Next come the 5 digits of the Long Count, followed by the Calendar Round (tzolk'in and Haab') and supplementary series series. The supplementary series is optional and contains lunar data, for example, the age of the moon on the day and the calculated length of current lunation.[n 2] The text then continues with whatever activity occurred on that date.

A drawing of a full Maya Long Count inscription is shown below.

The earliest Long Count inscription yet discovered is on Stela 2 at Chiapa de Corzo, Chiapas, Mexico, showing a date of 36 BCE.[n 3] This table lists the six artifacts with the eight oldest Long Counts according to Vincent H. Malmström.[3]

Of the six sites, three are on the western edge of the Maya homeland and three are several hundred kilometers further west, leading most researchers to believe that the Long Count calendar predates the Maya.[4] La Mojarra Stela 1, the Tuxtla Statuette, Tres Zapotes Stela C, and Chiapa Stela 2 are all inscribed in an Epi-Olmec, not Maya, style.[5] El Baúl Stela 2, on the other hand, was created in the Izapan style. The first unequivocally Maya artifact is Stela 29 from Tikal, with the Long Count date of 292 CE (8.12.14.8.15), more than 300 years after Stela 2 from Chiapa de Corzo.[6]

Correlations between Western calendars and the Long Count

The Maya and western calendars are correlated by using a Julian day number of the starting date of the current creation – 13.0.0.0.0 4 Ajaw, 8 Kumk'u.[n 4] This is referred to as a correlation constant. The generally accepted correlation constant is the Modified Thompson 2, "Goodman, Martinez, Thompson" – GMT correlation of 584,283 days. Using the GMT correlation the current creation started on September 6, 3114 BC (Julian) or August 11 in the Proleptic Gregorian calendar. The study of correlating the Maya and western calendar is referred to as the correlation question.[7][8][9][10][11] In Breaking the Maya Code, Michael Coe writes: "In spite of oceans of ink that have been spilled on the subject, there now is not the slightest chance that these three scholars (conflated to GMT when talking about the correlation) were not right...".[12]

The evidence for the GMT correlation is historical, astronomical, and archaeological:

Historical: Calendar Round dates with a corresponding Julian date are recorded in Diego de Landa's Relación de las cosas de Yucatán, the Chronicle of Oxcutzkab and the books of Chilam Balam. Oxcutzkab and de Landa record a date that is a Tun ending. Regarding these historical references in The Skywatchers Aveni writes: "All the assembled data are consistent with the equation November 3, 1539 = 11.16.0.0.0. Thus for the GMT, or 11.16 correlation we find that A = 584,283...".[13] The fall of the capital city of the Aztec Empire, Tenochtitlan, occurred on August 13, 1521. A number of different chroniclers wrote that this was a Tzolk'in (Tonalpohualli) of 1 Snake. Post-conquest scholars such as Sahagun and Duran recorded Aztec calendar dates with a calendar date. Many indigenous Guatemalan communities, principally those speaking the Mayan languages known as Ixil, Mam, Pokomchí, and Quiché, keep the Tzolk'in and (in many cases) the Haab'[14] and in Veracruz, Oaxaca and Chiapas, Mexico[15] These are all consistent with the GMT correlation.

Astronomical: Any correct correlation must match the astronomical content of classic inscriptions. The GMT correlation does an excellent job of matching lunar data in the supplementary series.[16] For example: An inscription at the Temple of the Sun at Palenque records that on Long Count 9.16.4.10.8 there were 26 days completed in a 30 day lunation.[n 5] The Dresden Codex contains an eclipse table[22] which gives eclipse seasons when the Moon is near its ascending or descending node and an eclipse is likely to occur. Dates converted using the GMT correlation fall roughly in this eclipse season. The Dresden Codex contains a Venus table which records the heliacal risings of Venus. The GMT correlation agrees with these to within a few days which is as accurately as these could have been observed by the ancient Maya.

Archaeological: Various items that can be associated with specific Long Count dates have been isotope dated. In 1959 the University of Pennsylvania carbon dated samples from ten wood lintels from Tikal.[23] These were carved with a date equivalent to 741 AD using the GMT correlation. The average carbon date was 746±34 years.

If a proposed correlation only has to agree with one of these lines of evidence there could be numerous other possibilities. Astronomers have proposed many correlations, for example: Lounsbury,[24] Fuls, et. al.,[25] Böhm and Böhm[26] and Stock.[27]

According to the Popol Vuh, a book compiling details of creation accounts known to the K'iche' Maya of the Colonial-era highlands, we are living in the fourth world.[29] The Popol Vuh describes the first three creations that the gods failed in making and the creation of the successful fourth world where men were placed. In the Maya Long Count, the previous creation ended at the start of a 14th b'ak'tun.

Maya inscriptions occasionally reference future predicted events or commemorations that would occur on dates that lie beyond 2012 (that is, beyond the completion of the 13th b'ak'tun of the current era). Most of these are in the form of "distance dates" where some Long Count date is given, together with a Distance Number that is to be added to the Long Count date to arrive at this future date.

For example, on the west panel at the Temple of Inscriptions in Palenque, a section of the text projects into the future to the 80th Calendar Round (CR) 'anniversary' of the famous Palenque ruler K'inich Janaab' Pakal's accession to the throne (Pakal's accession occurred on a Calendar Round date 5 Lamat 1 Mol, at Long Count 9.9.2.4.8 equivalent to 27 July 615 CE in the proleptic Gregorian calendar).[n 8] It does this by commencing with Pakal's birthdate 9.8.9.13.0  8 Ajaw 13 Pop (24 March 603 CE Gregorian) and adding to it the Distance Number 10.11.10.5.8.[31] This calculation arrives at the 80th Calendar Round since his accession, a day that also has a CR date of 5 Lamat 1 Mol, but which lies over 4,000 years in the future from Pakal's time—the day 21 October in the year 4772. The inscription notes[citation needed] that this day would fall eight days after the completion of the 1st piktun [since the creation or zero date of the Long Count system], where the piktun is the next-highest order above the b'ak'tun in the Long Count. If the completion date of that piktun—13 October 4772—were to be written out in Long Count notation, it could be represented as 1.0.0.0.0.0. The 80th CR anniversary date, eight days later, would be 1.0.0.0.0.8  5 Lamat 1 Mol.[31][32]

Despite the publicity generated by the 2012 date, Susan Milbrath, curator of Latin American Art and Archaeology at the Florida Museum of Natural History, stated that "We have no record or knowledge that [the Maya] would think the world would come to an end" in 2012.[33] "For the ancient Maya, it was a huge celebration to make it to the end of a whole cycle," says Sandra Noble, executive director of the Foundation for the Advancement of Mesoamerican Studies in Crystal River, Florida. To render December 21, 2012, as a doomsday event or moment of cosmic shifting, she says, is "a complete fabrication and a chance for a lot of people to cash in."[33] "There will be another cycle," says E. Wyllys Andrews V, director of the Tulane University Middle American Research Institute (MARI). "We know the Maya thought there was one before this, and that implies they were comfortable with the idea of another one after this."[34]

As stated, a full Long Count date not only includes the five digits of the Long Count, but the 2-character Tzolk'in and the two-character Haab' dates as well. The five digit Long Count can therefore be confirmed with the other four characters (the "calendar round date").

It is perhaps easier to find out how many days there are since 4 Ajaw 8 Kumk'u, and show how the date 5 Kib' 14 Yaxk'in is derived.

This means that 106395 whole 13 day cycles have been completed, and the numerical portion of the Tzolk'in date is 5.

To calculate the day, we divide the total number of days in the long count by 20 since there are twenty day names.

This means 16 day names must be counted from Ajaw. This gives Kib'. Therefore, the Tzolk'in date is 5 Kib'.

The Haab' date 8 Kumk'u is the ninth day of the eighteenth month. Since there are twenty days per month, there are eleven days remaining in Kumk'u. The nineteenth and last month of the Haab' year contains only five days, thus, there are sixteen days until the end of the Haab' year.

If we subtract 16 days from the total, we can then find how many complete Haab' years are contained.

We then find which month the day is in. Dividing the remainder 135 days by 20, we have six complete months, plus 15 remainder days. So, the date in the Haab' lies in the seventh month, which is Yaxk'in. The fifteenth day of Yaxk'in is 14, thus the Haab' date is 14 Yaxk'in.

As mentioned in the Syntax section, there are also four rarely used higher-order periods above the b'ak'tun: piktun, kalabtun, k'inchiltun, and alautun. All of these words are inventions of Mayanists.

The Dresden codex contains another method for linking Long Counts in the prior era to this one. These are not explicitly stated as Long Counts but are implied by a Ring Number – a distance number with the K'in coefficient enclosed in a red loop tied at the top. These are referred to as "Long Reckonings". Long Reckonings are distance numbers which are based on a date in the preceding creation to give a date in the current one. Thompson uses the last example from the Dresden codex:

A series of "Serpent Numbers" in the Dresden codex pp.61–69 has Long Reckonings from a date 34,000 years in the past to classical Maya Long Counts.