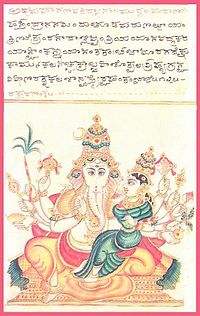 The Ganesha Purana (Sanskrit:गणेश पुराणम्; gaṇeśa purāṇam ) is a Hindu religious text dedicated to the Hindu deity Ganesha (Gaṇeśa). It is an upapurāṇa that includes many stories and ritualistic elements relating to Ganesha. The Ganesha Purana and the Mudgala Purana are core scriptures for devotees of Ganesha, known as Ganapatyas (Gāṇapatya). These are the only two Purana that are exclusively dedicated to Ganesha.[1]

The Ganesha Purana asserts its status as one of the eighteen upapuranas in its opening lines (I.1.8-9):

"There are, however, eighteen minor Purāṇas such as the Gaṇeśa, the Nārada, the Nṛsiṁha, etc. Amongst these, firstly I am going to recite the Gaṇeśa Purāṇa which is rarely heard, especially by someone in the world of mortals."[2]

These lines indicate that the authors sought to ensure the status of this work as an upapurāṇa, a category whose membership was not fully codified at that time.

Thapan (pp. 20–21) believes that the epithet Ganesha (Gaṇeśa) as a widely-used name for this deity appears to have been popularized by the Ganesha Purana, which is associated with the region of modern Maharashtra (Mahārṣṭra), Vananasi, Karnataka, and perhaps some parts of Andhra Pradesh. Today the epithet Ganapati (Gaṇapati) is popular in South India while Ganesha is more frequently used in Maharashtra and North India.[1]

The Ganesha Purana and the Mudgala Purana are the two late Puranas (c A.D. 1300-1600) produced by the Ganapatya (gāṇapatya) sect. These two Puranas are considered authoritative by devotees of Ganesha and include material not found in earlier sources.

During the medieval period the followers of Ganesha, known the Ganapatyas, formed an independent religious movement dedicated to the worship of Ganesha as their preeminent deity. They considered Ganesha to be the qualified (saguṇa) form of the ultimate unqualified (nirguṇa) Brahman. The Ganesha Purana is pervaded with this concept and interprets well-known Puranic stories in new ways to emphasize the importance of Ganesha and to explain his relationships with other divinities.

The Purana specifies many methods of worship, key beliefs, and philosophical positions of the Ganapatya sect. The contents of the Ganesha Purana are difficult to summarize because they include a variety of stories and devotional material. The general purpose of the work can be inferred from this set of questions that Vyāsa puts to Brahmā in the tenth chapter of the first Book (I.10.29-30 in Bailey's English edition):

"Who is this Ganesha? What is his real appearance (Sanskrit:स्वरूप; svarūpa; also spelled svarupa) and how can it be known? To whom has he previously been kindly disposed, four-faced god? How many are his incarnations and what deeds did they perform? Who previously worshipped him and in respect of what deed was he called to mind?"

The last chapter of the first book summarizes the lengthy narratives by saying:

"I have narrated the worship (Sanskrit:उपासना; upāsanā; also spelled upasana) of Ganesha to you in the course of a sequence of many tales. (I.92.53)[2]

These statements confirm the role that this Purana plays in establishing the relationship between Ganesha and his followers through the use of traditional Puranic stories and new material. This intends to emphasize the importance of Ganesha as a primary deity.

The date of composition for both the Ganesha Purana and the Mudgala Purana, and their dating relative to one another, has been a matter of academic debate. Both works contain age-layered strata, but these strata have not been clearly defined through the process of critical editorship. Some strata of the available redactions of the Ganesha Purana and the Mudgala Purana probably reflect mutual influence upon one another, including direct references to one another.

Thapan reviews different views on dating and states her own judgement that it appears likely that the core of the Ganesha Purana come into existence around the 12th and 13th centuries, being subject to interpolations during the succeeding ages.[4] Thapan notes that these Puranas, like other Puranas, developed over a period of time as multi-layered works.

The Ganesa Purana is divided into two sections. The Upasanakhanda (upāsanākhaṇḍa) or "section on devotion" has 92 chapters, and the Kridakhanda (krīḍākhaṇḍa) or "section on the divine play (of Gaṇeśa)" has 155 chapters. The Kridakhanda is also called the Uttarakhanda (uttarakhaṇḍa) in the colophons.[8] Chapter 46 of the Upasanakhanda includes a stotra (hymn) that is the source text for one of the best-known versions of the Ganesha Sahasranama (hymn of praise listing 1,000 names of Ganesha). This stotra is recited in many temples today as a living part of Ganesha devotion.

Chapters 138-48 of the Kridakhanda constitute the Ganesha Gita, which is modeled on the Bhagavad Gita, but adapted to place Ganesha in the divine role.[9] The discourse is given to King Varenya during Ganesha's incarnation as Gajanana.

Krishan says that a critical examination of the Ganesha Gita shows that ninety percent of its stanzas are, with slight modifications, taken from the Bhagavad Gita.[10] Their topics are the same: karma yoga, jnana yoga and bhakti yoga. However, Ganesha replaces Krishna in the divine role. In II.138.22 Ganesha asserts claims similar to those made by Krishna in BG 4.6-8: I create the world, maintain it and destroy it again; I am Mahavishnu, Sadashiva, and Mahashakti, and Aryaman, the sun. In II.140.9-11 he says that he is unborn (aja), the life principle in all beings (bhūtātmā), beginningless (anādi), and lord (īśvara). Like Krishna, whenever there is an increase of unrighteousness (adharma) and decline of righteousness (dharma) he takes birth to protect the good and destroy the wicked.

The four incarnations of Ganesha 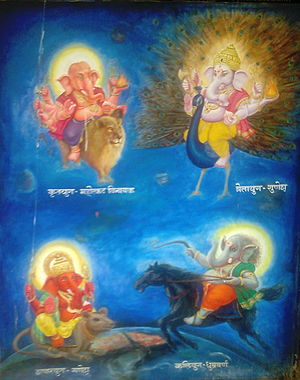 The Kridakhanda of the Ganesha Purana narrates the stories of four incarnations (Avatars, Sanskrit:अवतार; avatāra) of Ganesha, each of which appeared in the four different yugas.[10][11]

These four are not the same as the eight incarnations of Ganesha that are described in the Mudgala Purana.

Greg M. Bailey, who has published a scholarly review and translation into English of the first portion (upāsanākhaṇḍa) of the Ganesha Purana, notes that there are hundreds of manuscripts for this Purana in libraries in India, and that it was clearly very popular from the 17th to 19th centuries. The Bailey edition does not provide the Sanskrit text.[2]

The Ganesha Purana was published three times before the edition of the Śrī Yogīndra Maṭha:[1]

One well-known edition that is currently obtainable is the 1993 full-length reprint edition of the 1892 edition, providing the full Sanskrit text in Devanagari script. The 1993 reprint edition edited by Ram Karan Sharma is not mentioned in Bailey's bibliography. Spot comparisons of line numbering and content show some variations between the Bailey and Sharma editions.[16]

Thapan notes (p. 33) that the Ganesha Purana was translated into Tamil in the eighteenth century and the Tamil version is referred to as the Vināyaka Purāṇa.[1]