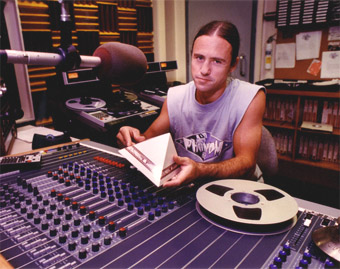 Jeff Stuart Green (born , ) is a Canadian writer, playwright, producer, and director working in a variety of media including radio, television, computer and DVD-based multimedia, and in live club settings ["Barrymore's Video Kid, Jeff Green, Is Dusting Off Some Unusual Footage". "The Ottawa Citizen", , &mdash; about an video presentation.] . His work has earned him critical acclaim [Crook, T. "Radio Drama: Theory and Practice". London: Routledge, 1999. ISBN 0-415-21603-6] ["CHEZ Radio Play a Sci-Fi Romp". "The Ottawa Citizen", , , p. C16 &mdash; about the first airing of "Spaxter".] and a number of awards. In addition to the work he has created, he was instrumental in the evolution of broadcast radio in the , , market during the late 1970s and the 1980s &mdash; specifically, the ["Radio Carleton Ready to Roll". "The Ottawa Journal", , , p.33 &mdash; features a large photo of Jeff Green at production controls, wearing torn shirt and jeans, held together with , and with WWII-era military anti-snowblindness slit goggles on his forehead.] and the commercial station CHEZ-FM.

Currently, he is working on a DVD-based interactive production, titled "Stranger Still", as a follow-on to his CD-ROM based productions, "" and "Mode"; a featuring the lead character from his radio plays "Spaxter" and "Spaxterback"; a philosophical treatise on the nature of entitled "Everything's True"; and every two weeks he produces and hosts an overnight radio show on .

In addition to his work in , he is also heavily involved in the practice of , has a black belt in and has studied it in , was a Western Ontario Secondary School Association all-around champion, received his Masters level of from the Taylor Statten Camps of Canada, and has taught in .

Jeff Green began his career in radio in 1972 at Carleton University's CKCU-FM, when it was only running with a carrier current license &mdash; "broadcasting" by closed circuit to the university commons areas, and through a transmitter in the residence building to the students there. He was one of the founding Production Managers when CKCU-FM received its FM radio license in 1975. In 1976, he became the founding Production Manager at the Ottawa, Ontario station CHEZ-FM. In 1980 he received a Explorations grant to create the radio drama “Epiphanies”, intended as a pilot for a series that was never produced. In addition to his work in radio, he was editor for the now-defunct tabloid entertainment paper Ottawa Revue from 1981 to 1983. From 1983 to 1985, he was Central and Eastern Canada’s first VJ, presenting groundbreaking video programming at venue before television was generally available in ( had just launched and was only available by , which was relatively rare at the time).

In , from 1979 through 1983, Jeff Green designed and executed an annual series of popular ["Ne'ewollaH Devotees Plan to Invade Barrymore's". "The Ottawa Citizen", , &mdash; about the "Trontastic Luminous Ne'ewollah" event.] live club s at Hallowe'en entitled "Ne'ewollah" [The backwards name derives from his having held rich Hallowe'en parties in his long and narrow in the late 1970s. To get sufficient image size from the projectors, he aimed them down a way and bounced them off a , hence all images were backwards. Source: email from Jeff Green.] . The first commercial "Ne'ewollah" occurred in 1979 at the "80s Club". Subsequent events were held at various venues including "" and the "Paradise Lounge", all featuring numerous projectors, , s, , and other effects. The 1982 "Trontastic" show was based on the movie Tron, had blacklights illuminating fluorescent strips on the railings to look like a Pacman game, and waitresses in black with fluorescent strips that resembled the characters in the . During breaks from live performers, arcade video games played by local "experts" were projected on a giant screen, and their sounds mixed with contemporary music. The "World War '83" "Ne'ewollah" featured the club laid out with sand bags, camouflage netting and s, and the video screen playing war-themed rock videos, movies, and documentaries matched to . Participants were invited to come in military costumes and a "war game" was undertaken. "s" were stamped with drink purchases to increase "power", and individuals could join in groups to engage in d "s" with others using their amassed "power". At least once an hour, there was an "air raid". The club would go dark, and loud plane and sounds, pumped through specially installed s, would occur, accompanied by and flash pyro effects. At midnight, the band "8 Seconds" played Greg Lake's song "Nuclear Attack", after which occurred an "air raid" warning of an incoming thermonuclear event. The room went dark, there was a massive silent flash effect in the centre of the room, a projected , a bank of blacklights came on as the only illumination, and "8 Seconds" began a 40-minute version of the song "The End" by .

In 1985 he began the series of radio dramas that became known as “Soundings”. “Soundings” went on to win several awards, including a silver medal at the New York International Radio Festival. Originally aired on Ottawa’s CHEZ-FM, episodes of the series were eventually broadcast on the , , and (U.S.) networks, as well as London England’s LBC Radio station. The radio plays are presently part of the roster of XM Satellite Radio’s Sonic Theater channel.

In 1990, Green began an association with members of Ottawa’s Salt & Pepper Theatre Company which resulted in the 4-season “” television series, an all-ages of children’s programming for which he was co-creator, co-writer, producer, director, and performer. The series was broadcast from 1991 to 1995 on the Mid-Canada Television Network, and won the 1992 Canpro Award (Canadian Independent Television Producer’s Association) for Best Children’s Series.

In 1993, he teamed up with the Animatics Multimedia Corporation, which resulted in the award-winning video-based interactive productions “” and “Mode” on which he acted as co-creator, writer, and director. These s were notable for their innovative interface and "point of view" social interaction, and were noted as being some of the finest productions available in their genre [e.g. Blackwell, G., "Take a Virtual Walk on the Wild Side". "The Toronto Star", , .] .

He is currently working and teaching in , , , and produces and hosts a bi-weekly show on CKCU-FM. His current major project is the production of a loose sequel to “” entitled “Stranger Still”, set in the same streets an hour later than the original, which is designed to be experienced on . He is also working on a based in the "Spaxter" universe, and a book on the of titled "Everything's True".

The "Soundings" series of radio plays

Written and produced by Jeff Green (he produced numerous others):