Soyuz TM-30 (Russian: Союз ТМ-30, Union TM-30), also known as Mir EO-28, was a Soyuz mission, the 39th and final human spaceflight to the Mir space station. The crew of the mission was sent by MirCorp, a privately funded company, to reactivate and repair the station. The crew also resupplied the station and boosted the station to an orbit with a low point (perigee) of 360 and a high point (apogee) of 378 kilometers (223 and 235 miles, respectively). The boost in the station's orbit, which was done by utilizing the engines of the Progress M1-1 and M1-2 spacecraft, made transit between Mir and the International Space Station impossible, as desired by NASA. The mission was the first privately funded mission to a space station.[1][2]

The mission was part of an effort by MirCorp to refurbish and privatize the aging Mir space station, which was nearing the end of its operational life. Further commercially funded missions beyond Soyuz TM-30 were originally planned to continue the restoration efforts of the then 14-year-old space station, but insufficient funding and investment ultimately led to the de-orbit of the station in early 2001.[2][3]

While Soyuz TM-30 was in orbit, a second privately funded mission was being planned to continue the restoration efforts aboard Mir. The crew assigned to this mission, although never flown, was reported to have been the backup crew for TM-30, cosmonauts Salizhan Sharipov and Pavel Vinogradov.[3]

Soyuz TM-30 was intended by MirCorp to be the first in a series of missions to refurbish the 14-year-old Mir space station for commercial use. Although the mission was scheduled to last approximately two months, commander Sergei Zalyotin said before the flight that if additional funds became available the mission could be extended until August, when another crew would replace them. The other possible scenario, which occurred in reality, was again to leave the station uninhabited, as had been done several months before the mission.[8] Towards the end of Soyuz TM-30 plans were formed to send another privately funded mission to continue with MirCorp's maintenance efforts; cosmonauts Salizhan Sharipov and Pavel Vinogradov were tentatively assigned as the crew.[3] 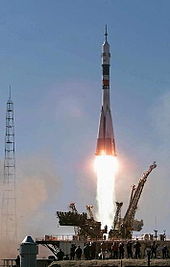 Soyuz TM-30 launched at 5:01:29 UT on April 4, 2000. Docking occurred on April 6 at 6:31:24 UT. Although the Soyuz docking system is automated under normal conditions, the final few meters of the approach to the station were executed in manual mode. The decision to switch to manual mode came after the cosmonauts noticed a small deviation in the spacecraft's approach to the targeted docking port. At about 9:32 UT on the day of docking, the crew prepared to open the hatches between the Soyuz spacecraft and the station. After entering the station the crew stabilized the atmosphere inside Mir and undertook routine maintenance work.[1]

On April 25, an unmanned Progress resupply mission, Progress M1-2, launched from the Baikonur Cosmodrome to the station to deliver supplies to the crew. Progress M1-2 docked with Mir on April 27. On April 26, the Progress M1-1 spacecraft, which had been docked since February and was used by the Russian Federal Space Agency to boost the station to a higher orbit, undocked and de-orbited over the Pacific Ocean east of New Zealand.[1]

The mission's only Extra-Vehicular Activity, or spacewalk, took place on May 12. The primary objectives of the spacewalk were to repair damage to Mir's exterior components and record panoramas of the station's hull in order for experts on Earth to analyze the effects of space on the station itself. The cosmonauts inspected a malfunctioning solar array on the Kvant-1 module of the station. They discovered that a burnt-through wire connecting the array with its steering system was preventing its proper rotation. The array was subsequently deemed a loss.[1][4]