Conus
This article is about the genus of snails. For other uses, see Conus (disambiguation).

"Cucullus" redirects here. This may also refer to part of the clasper in male insect genitalia.

Conus is a large genus of small to large predatory sea snails, marine gastropod molluscs, with the common names of cone snails, cone shells or cones. This genus is in the subfamily Coninae within the family Conidae. Geologically speaking, the genus is known from the Eocene to the Recent (Holocene) periods.[3] Conus snails are mostly tropical in distribution. They are all venomous to one degree or another. The most dangerous species hunt fish using harpoon-like teeth and a poison gland. Others hunt and eat marine worms or molluscs.

Conus species have shells that are shaped more or less like geometric cones. Many species have colorful patterning on the shell surface.

Live cone snails should be handled with care — or not handled at all — they are capable of "stinging" humans with unpleasant results. Cone snail venoms are mainly peptides, and accordingly there are many forms that vary in their effects; some are extremely toxic. The sting of small cones is no worse than a bee sting, but the sting of a few of the larger species of tropical cone snails can be serious, occasionally even fatal to human beings.

There are over 600 different species of cone snails.[2] This family is typically found in warm and tropical seas and oceans worldwide, and reaches its greatest diversity in the Western Indo-Pacific Region. However, some species of Conus are adapted to temperate environments, such as the Cape coast of South Africa,[6] or the cool waters of southern California (Conus californicus) and are endemic to these areas.

This genus is found in all tropical and subtropical seas from tidal waters to deeper areas, living on sand or among rocks or coral reefs. When living on sand, these snails will bury themselves with only the siphon protruding from the surface. Many tropical cone snails live in or near coral reefs. Some species are found under rocks in the lower intertidal and shallow subtidal zones.

This genus shows a large variety of colors and patterns, and local varieties and color forms of the same species often occur. This has led to the creation of a large number of known synonyms and probable synonyms, making it difficult to give an exact taxonomic assignment for many snails in this genus. As of 2009, more than 3,200 different species names have been assigned to snails in the genus Conus, with an average of 16 new species names introduced a year.[7]

The shells of Conus species are small to large in size. The shells are shaped more or less like the geometric shape known as a cone, as one might expect from the popular and scientific name. The shell is many-whorled and in the form of an inverted cone, the anterior end being the narrow end. The protruding parts of the top of the whorls that form the sprire are more or less in the shape of another, much more flattened, cone. The aperture is elongated and narrow. The horny operculum is very small. The outer lip is simple, thin and sharp and without a callus. The outer lip has a notched tip at the upper part. The columella is straight.

The larger species of cone snails can grow up to 23 cm in length. The shells of cone snails are often brightly colored, and have interesting patterns, although in some species the color patterns may be partially or completely hidden under an opaque layer of periostracum. The patterns on the shell sometimes resemble certain one-dimensional cellular automata, and may in fact be biological versions of them.[citation needed]

The shell of living species is covered with a thin periostracum, a transparent yellowish or brownish membrane.

Cone snails are carnivorous, and predatory. They hunt and eat prey such as marine worms, small fish, mollusks, and even other cone snails. Because cone snails are slow-moving, they use a venomous harpoon (called a toxoglossan radula) to capture faster-moving prey such as fish. The venom of a few larger species, especially the piscivorous ones, is powerful enough to kill a human being.

The osphradium (a chemoreceptory organ) in the family Conidae is more highly specialized than the same organ in any other family of gastropods. It is through this sensory modality that cone snails become aware of the presence of a prey animal, not through vision. The cone snails immobilize their prey using a modified, dartlike, barbed radular tooth, made of chitin, along with a poison gland containing neurotoxins. Small species of these cone snails hunt small prey such as marine worms, whereas larger cone snails hunt live fish.

Molecular phylogeny research by Kraus et al. (2010)[8] based on a part of "intron 9" of the gamma-glutamyl carboxylase gene has shown that feeding on fish in Conus has evolved at least twice independently. 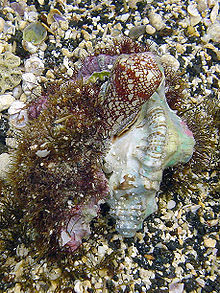 An individual Conus pennaeus attacking one of a group of three snails of the species Cymatium nicobaricum, in Hawaii

Cone snails use a tooth as a harpoon-like structure for predation. Each of these harpoons is a modified tooth, primarily made of chitin. These teeth are formed inside the mouth of the snail, in a structure known as the radula. (The radula in most gastropods has rows of many small teeth, and is used for grasping at food and scraping it into the mouth.) Each tooth is stored in the radula sac (an evaginated pocket in the posterior wall of the buccal cavity), except the tooth in use.

The harpoon of the cone snail is hollow and barbed, and is attached to the tip of the radula in the radular sac inside the snail's throat. When the snail detects a prey animal nearby, it turns a long flexible tube called a proboscis - towards the prey. The harpoon is loaded with venom from the poison bulb and, still attached to the radula, is fired from the proboscis into the prey by a powerful muscular contraction. The venom paralyzes small fish almost instantly. The snail then retracts the radula, drawing the subdued prey into the mouth. After the prey is digested, the cone snail will regurgitate any indigestible material such as spines and scales, along with the then-disposable harpoon. There is always a dart stored in the radular sac and they may be also used in self-defense when the snail feels threatened.

The tropical cone snail Conus purpurascens uses its special modified radular teeth to fire a retrievable hollow dart at small fish and inject a toxin. The toxin rapidly paralyses the fish, which the cone snail then swallows.[9][10]

All cone snail species are equipped with a battery of toxic harpoons which can fire in any direction, even backwards. Some of these toxins can be fatal to humans.[11]

The venom of cone snails contains hundreds of different compounds, and its exact composition varies widely from one species of cone snail to another. The toxins in these various venoms are called conotoxins. These are various peptides, each targeting a specific nerve channel or receptor. Some cone snail venoms also contain a pain-reducing toxin, which the snail uses to pacify the victim before immobilising and then killing it.

Risk of being stung 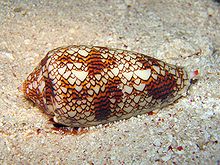 A live Textile cone, Conus textile, one of the three most dangerous cones to handle.

The bright colors and patterns of cone snails are attractive to the eye, and therefore people sometimes pick up the live animals and hold them in their hand for a while. This is risky, because the snail often fires its harpoon in these situations. In the case of the larger species of cone snail, the harpoon is sometimes capable of penetrating the skin, even through gloves or wetsuits.

The sting of many of the smallest cone species may be no worse than that of a bee or hornet sting,[12] but in the case of a few of the larger tropical fish-eating species, especially Conus geographus, Conus tulipa and Conus striatus, a sting can sometimes have fatal consequences. Other dangerous species are Conus pennaceus, Conus textile, Conus aulicus, Conus magus and Conus marmoreus [1]. According to Goldfrank's Toxicologic Emergencies, only about 15 deaths can be confidently attributed to cone snail envenomation.

Most of the cone snails that hunt worms rather than fish are probably not a real risk to humans, with the possible exception of larger species such as Conus vexillum or Conus quercinus.

One of the fish-eating species, the geography cone, Conus geographus, is also known colloquially as the "cigarette snail," a humorous exaggeration implying that, when stung by this creature, the victim will have only enough time to smoke a cigarette before dying.[13][14]

Symptoms of a more serious cone snail sting include intense, localized pain, swelling, numbness and tingling and vomiting. Symptoms can start immediately or can be delayed in onset for days. Severe cases involve muscle paralysis, changes in vision and respiratory failure that can lead to death. There is no antivenom, and treatment involves providing life support until the venom is metabolised by the victim.

Medical use of the venom

The appeal of the cone snail's venom for creating pharmaceutical drugs is the precision and speed with which the various components act; many of the compounds target a particular class of receptor, to the exclusion of any other. This means that in isolation, they can reliably and quickly produce a particular effect on the body's systems without side effects; for example, almost instantly reducing heart rate or turning off the signaling of a single class of nerve, such as pain receptors.

The venom of some cone snails, such as the magician cone, Conus magus, shows much promise for providing a non-addictive pain reliever 1000 times as powerful as, and possibly a replacement for, morphine.[15]

Many peptides produced by the cone snails show prospects for being potent pharmaceuticals, such as AVC1, isolated from the Australian species, the Queen Victoria cone, Conus victoriae. This has proved very effective in treating postsurgical and neuropathic pain, even accelerating recovery from nerve injury.

The first painkiller derived from cone snail toxins, ziconotide, was approved by the U.S. Food and Drug Administration in December 2004 under the name "Prialt". Other drugs are in clinical and preclinical trials, such as compounds of the toxin that may be used in the treatment of Alzheimer's disease, Parkinson's disease, and epilepsy.[16]

The intricate color patterns of cones have made them one of the most popular collectible shells.[17][18]

Conus gloriamaris, the "Glory of the Seas" cone was, in earlier centuries, one of the most famous and sought-after seashells, with only a few specimens in private collections. This apparent rarity meant that shells of this species fetched very high prices, until finally the habitat for this cone was discovered. Sizable populations were then located, and this brought the price down dramatically.[19]

Naturally-occurring, beachworn cone shell "tops" (the broken-off spire of the shell, which usually end up with a hole worn at the tip) can function as beads without any further modification. In Hawaii, these natural beads were traditionally collected from the beach drift to make puka shell jewelry. Since it is hard to obtain enough naturally-occurring cone tops, almost all modern puka shell jewelry uses cheaper imitations, cut from thin shells of other species of mollusk, or even made of plastic.

The number of valid names of recent species in the genus Conus is over 600[2] and there are, in addition, a large number of fossil species.