New York State Route 30A (NY 30A) is a state highway in the Capital District of New York in the United States. It serves as a westerly alternate route of NY 30 from near the Schoharie County village of Schoharie to the Fulton County hamlet of Riceville, 1 mile (1.6 km) south of the village of Mayfield. While NY 30 heads generally north–south between the two locations and passes through Amsterdam, NY 30A veers west to serve the villages of Fonda and Fultonville and the cities of Johnstown and Gloversville. Along the way, it connects to several major east–west highways, including U.S. Route 20 (US 20) in Esperance and the New York State Thruway in Fultonville.

South of the Mohawk River, Route 30A is a rural, winding two-lane highway with narrow shoulders. North of the Mohawk, NY 30A is more modern, with wider shoulders and more gentle curves.

Route 30A begins between the village of Schoharie and Interstate 88 (I-88). As NY 30 bears off to the right and heads uphill, 30A continues straight ahead. Southbound Route 30 traffic must stop at this intersection. NY 30A accesses I-88 at exit 23, a standard diamond interchange. This exit also serves as the access to NY 30. North of I-88, 30A meets NY 7, turning left for a 1 mile (1.6 km) concurrency. After leaving Route 7, NY 30A passes through the hamlet of Central Bridge on its way to Sloansville, where it intersects US 20. This is the easternmost point of US 20 being a divided four-lane highway. Also in Sloansville is the southern terminus of NY 162, which runs concurrently with 30A for less than a mile before splitting off to the west. NY 30A enters Montgomery County soon afterward. 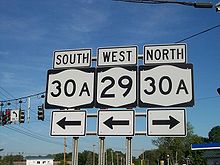 Route 30A continues northward through the town of Glen. In the hamlet of the same name, the western terminus of NY 161 is met. Traffic must slow down considerably, as the highway weaves around old structures at this location. 30A continues north, entering the village of Fultonville as Main Street, intersecting NY 5S and accessing the Thruway. Crossing the Mohawk River/Erie Canal, 30A enters Fonda as Bridge Street, passing by the Fonda Speedway and Fonda Fairgrounds before overpassing a railway and meeting NY 5 for another concurrency. After the split, 30A heads north as Broadway and uphill. A northbound passing lane is present on two steep ascents as 30A approaches Fulton County.

Route 30A passes by one of the New York State Empire Zones before entering Johnstown. Within Johnstown and Gloversville, 30A is known as "The Arterial". Johnstown's Arterial includes direct access to several retailers, known in the city as Comrie Avenue. In Gloversville, the Arterial has no access other than through existing intersections to its share of retailers. Most Gloversville-based retailers are accessed after 30A leaves Gloversville proper, although the highway is associated with the city until after crossing State Street and NY 349. After that, the highway becomes rural again, entering the town of Mayfield. Short of the Mayfield village and the Adirondack Park, Route 30A ends at Route 30 adjacent to the hamlet of Riceville. As at 30A's southern terminus, northbound Route 30 traffic must stop at this intersection.

In 1908, the New York State Legislature created Route 24, an unsigned legislative route that initially extended from Fonda to Lake Pleasant via Johnstown, Gloversville, Mayfield, and Speculator. From Fonda to the southern edge of Johnstown, Route 24 utilized modern NY 30A. Northeast of Gloversville, it followed East State Street, current County Route 154, and Riceville Road to Mayfield. In between, it was routed along several city streets in Johnstown and Gloversville.[4][5] All of legislative Route 24 south of Speculator was designated as part of NY 54 in the mid-1920s.[6][7] Like Route 24 before it, NY 54 followed a series of local streets through Johnstown and Gloversville. It entered Johnstown on Chestnut Street and proceeded northward through the city on Madison Avenue and Perry Street. In Gloversville, Perry Street became Main Street, which NY 54 followed to State Street.[8]

NY 54 was reassigned elsewhere in the state as part of the 1930 renumbering of state highways in New York. The portion of NY 54's former alignment south of Mayfield became part of NY 148, a new route that extended from NY 7 in Central Bridge to NY 30 in Mayfield.[8][9] The section of modern NY 30A south of NY 7 was initially designated as part of NY 43 in the mid-1920s[6][7] before becoming part of NY 30 in 1930.[8][9] In the early 1940s, NY 30 was rerouted to follow a new highway that left the old alignment of NY 30 southeast of Central Bridge and connected directly to the portion of NY 30 north of NY 7.[10][11] The former routing of NY 30 into Central Bridge became an extension of NY 43, which overlapped NY 30 between the new alignment and Schoharie.[12]

In 1956 and 1957, an arterial highway was constructed between Johnstown and Mayfield by way of Gloversville. The new roadway became a realignment of NY 148. Johnstown's portion of the arterial includes direct access to businesses as the city purchased the necessary access rights from the state of New York.[13] The portion of NY 43 north of NY 30 and all of NY 148 was redesignated as NY 30A in the late 1950s.[1][2]