Operation Frühlingserwachen ("Spring Awakening") (6-16 March 1945) was the last major German offensive launched during World War II. The offensive was launched in Hungary on the Eastern Front. This offensive was also known in German as the Plattensee Offensive, in Russian as the Balaton Defensive Operation (6-15 March 1945), and in English as the Lake Balaton Offensive.

The offensive was launched by the Germans in great secrecy on 6 March 1945. The German attacks were centered in the Lake Balaton area. This area included some of the last oil reserves still available to the Germans.

Operation Spring Awakening involved many German units withdrawn from the failed Ardennes Offensive on the Western Front including the 6th SS Panzer Army. 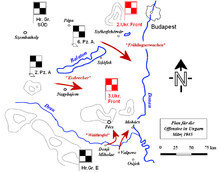 As planned, the offensive got under way on 6 March. It was spearheaded by the German 6th SS Panzer Army. The spearhead included elite units like German dictator Adolf Hitler's personal unit, the Leibstandarte Adolf Hitler Division. Despite the extremely muddy conditions, the Germans managed to attack effectively and take the Soviets by surprise. Impressive gains were made for an offensive launched at such a late date in World War II.

However, once the Soviets realized that elite SS units were involved in the attack, they took the offensive seriously. Gathering large forces to counter the 6th SS Panzer Army's gains, they brought the attack to a standstill.

By 14 March, Operation Spring Awakening was already in serious trouble. At that time, Joseph Goebbels wrote in his diary that failure of the offensive was likely. The advance of the 6th SS Panzer Army, while impressive, was well short of its ambitious goals. The German 2nd Panzer Army did not do so well south of Lake Balaton as the 6th SS Panzer Army did, north of Lake Balaton. Army Group E met fierce resistance from the Bulgarian First Army and Josip Broz Tito's Yugoslavian partisan army, and ultimately failed to reach its objective, Mohács. 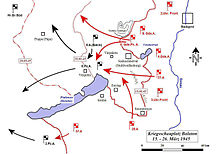 On 16 March, the Soviets counterattacked in strength. Within 24 hours of the Soviet counterattack, the Germans were driven back to the positions they held before Operation Spring Awakening.[4]

On 22 March, hopelessly out-numbered and with few armoured vehicles remaining, the surviving German forces withdrew to prepared positions elsewhere in Hungary. The Soviet counteroffensive continued and these positions were soon over-run.

On 30 March, the Soviet 3rd Ukrainian Front crossed from Hungary into Austria.

By 15 April, the remnants of the 6th SS Panzer Army were north of Vienna. They faced the Soviet 9th Guards Tank Army and the Soviet 46th Army. The Soviet's Vienna Offensive had ended. The city fell to the Soviets on 13 April.

By 15 April, the remnants of the German 6th Army were north of Graz. They faced the Soviet 26th Army and the Soviet 27th Army.

By 15 April, the remnant of the German 2nd Panzer Army were south of Graz in the Maribor area. They faced the Soviet 57th Army and the Bulgarian First Army. Between 25 April and 4 May, the 2nd Panzer Army was badly bloodied by both armies near Nagykanizsa during the Nagykanizsa–Kermend Offensive.

Between 16 and 25 April, the Hungarian Third Army was destroyed about 40 km (25 mi) west of Budapest. They were destroyed by the Soviet 46th Army which was driving towards Bratislava and on to the Vienna area.

Some Hungarian units survived the fall of Budapest and the destruction which followed when the Soviets counterattacked after Operation Spring Awakening. The Hungarian Szent László Infantry Division was still indicated to be attached to the German 2nd Panzer Army as late as 30 April.

Almost inevitably, Operation Spring Awakening was a failure for the German Army (Wehrmacht Heer). Despite early gains, the operation was a prime example of Hitler's reckless military judgement towards the end of the war. Its chief flaw was that the offensive was much too ambitious in scope. Not only were the Germans supposed to retake Budapest, but the Nagykanizsa oil fields south of Lake Balaton were to be defended. In addition, Hitler expected this German offensive to push the Soviet 3rd Ukrainian Front back to the Danube River and prevent Soviet General Rodion Malinovsky from continuing his army's advance into Hungary.

Strategically, Operation Spring Awakening had no impact upon the outcome of World War II. On a tactical level, the operation highlighted the fighting qualities of the German army that still existed. But within 24 hours of the Soviet counterattack, the Germans were driven back to the positions they held before the operation.

This debacle is famous for the notorious "armband order" which followed. The order was issued to the commander of German 6th SS Panzer Army, Sepp Dietrich, by Adolf Hitler, who claimed that the troops, and, more importantly, the Leibstandarte Adolf Hitler, "did not fight as the situation demanded."[5] As a mark of disgrace, the Leibstandarte units involved in the battle were ordered to remove their treasured "Adolf Hitler" cuff titles (German: Armband). In the field, Sepp Dietrich was disgusted by Hitler's order and did not relay it to his troops. 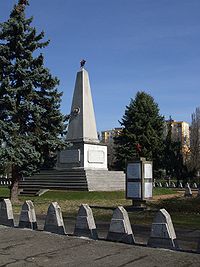