Born in Manhattan, Kansas, Peterson grew up near Randolph, until the area was flooded to create Tuttle Creek Reservoir; then her family moved to Colorado Springs, Colorado. According to a 2011 interview, Peterson states that as a child, while other girls were occupied with Barbie dolls, she was more fascinated by horror-themed toys.[1] During her teens Peterson worked as a go-go dancer in a local gay bar.[2] She graduated from General William J. Palmer High School in 1969. Days after graduating, she drove to Las Vegas, Nevada, where she became a showgirl in "Viva Les Girls" at the The Dunes. She had a small role as a showgirl in the 1971 James Bond film Diamonds Are Forever, briefly dated Elvis Presley, played a topless dancer in The Working Girls (1974), and purportedly posed for the cover of Tom Waits's 1976 album, Small Change.[3] This story is apparently unverified, however, as Peterson has since described it as "a giant mystery", claiming that while she has no memory of the event, the picture looks enough like her that she feels "pretty sure" that it is.[4] She is a vegetarian[5][6] and has appeared in a humorous Halloween-themed ad for PETA promoting a vegetarian diet.[7]

In the early 1970s she moved to Italy and became the lead singer of the Italian rock band, I Latins Ochanats. During this time she had a chance encounter with director, Federico Fellini, which led to a small part in Roma (1972). Back in the United States she toured nightclubs and discos around the country with a musical/comedy act, Mammas Boys. In 1979 she joined the Los Angeles-based improvisational troupe, The Groundlings, where she created a Valley girl-type character upon whom the Elvira persona largely is based.

Peterson auditioned for the role of Ginger Grant for the third Gilligan's Island television movie in 1981, shortly before KHJ-TV offered her the horror-host position.[8] 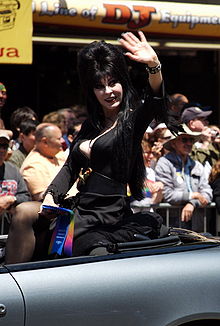 In the late spring of 1981, five years after the death of Larry Vincent (who starred as host Sinister Seymour of a local Los Angeles weekend horror show called Fright Night), show producers began the task of bringing the show back. Deciding to use a female host, producers asked 1950s horror host, Maila Nurmi, to revive The Vampira Show. Nurmi worked on the project for a short time, but eventually quit when the producers would not hire Lola Falana to play Vampira. The station continued with the project and sent out a casting call. Peterson auditioned against 200 other horror hostess hopefuls, and won the role. Producers left it up to her to create the role's image. She and best friend, Robert Redding, came up with the sexy punk/vampire look after producers rejected her original idea to look like Sharon Tate in The Fearless Vampire Killers.

Unable to continue with the Vampira character, the name Elvira was chosen. What followed was Elvira's Movie Macabre, featuring a quick-witted valley-girl type character named Elvira, Mistress of the Dark. With heavily-applied, pancake-horror make up and a towering black beehive wig to conceal her flame-red hair, the transformation from Cassandra Peterson to the sexy "Elvira" was so drastic that no one ever recognized her out of costume.

Shortly before the first taping, producers received a cease and desist letter from Nurmi. Besides the similarities in the format and costumes, Elvira's closing line for each show, wishing her audience "Unpleasant dreams," was notably similar to Vampira's closer: "Bad dreams, darlings..." uttered as she walked off down a misty corridor. The court ruled in favor of Peterson, holding that "'likeness' means actual representation of another person's appearance, and not simply close resemblance." Peterson claimed that Elvira was nothing like Vampira aside from the basic design of the black dress and black hair. Nurmi herself claimed that Vampira's image was based on Morticia Addams, a Charles Addams cartoon character from The Addams Family comic strip in The New Yorker magazine.

The Elvira character rapidly gained notoriety with her tight-fitting, low-cut black gown which showed more cleavage than had ever appeared on local Los Angeles television before. The movies featured on Elvira's Movie Macabre were always B grade (or lower). Elvira reclined on a red Victorian couch, introducing and often interrupting the movie to lampoon the actors, the script, and the bad editing. Adopting the flippant tone of a California valley-girl, she brought a satirical, sarcastic edge to her commentary without ever being crass or mean-spirited. Like a macabre Mae West, she reveled in dropping risqué double entendres, as well as making frequent jokes about her eye-popping display of cleavage. In an AOL Entertainment News interview Peterson revealed, "I figured out that Elvira is me when I was a teenager. She's a spastic girl. I just say what I feel and people seem to enjoy it." Her campy humor, obvious sex appeal, and good-natured self-mockery endeared her to late-night movie viewers as her popularity soared. At the same time Elvira was embraced as an icon of the waning 1980s punk movement, as well as the emerging Goth subculture.

The demand for Elvira increased throughout the 1980s. A frequent guest on The Tonight Show Starring Johnny Carson and many other talk shows, she also produced a long-running series of Halloween-themed TV ads for Coors Light Beer and Mug Root Beer (her trademark cleavage was covered up for the Coors campaign). She did guest roles on television dramas such as CHiPs, The Fall Guy, and Fantasy Island, and appeared on numerous awards shows as a presenter. Despite the fact that her success is forever linked to her image as Elvira, Peterson has never been reluctant to make out-of-costume appearances as herself for television interviews and specials.

In 1982 with the surprising success of Movie Macabre, Knott's Theme Parks hired Elvira to replace Seymour as the host of its annual Halloween Haunt during the month of October. Elvira would appear nightly at the park, live on stage with a Halloween-themed musical comedy revue similar to her Mamma's Boys act from the 1970s.

The Elvira character rapidly evolved from obscure cult figure to lucrative brand-name and "Mistress of all Media", spawning countless products throughout the 1980s and 1990s, including Halloween costumes, comic books,[9][10] action figures, trading cards, pinball machines, Halloween decor, model kits, calendars, perfume, and dolls. She has appeared on the cover of Femme Fatales magazine five times. Her popularity reached its zenith with the release of the feature film, Elvira, Mistress of the Dark (co-written by Peterson) in 1988. She also did many non-Elvira character-roles in other films, most notably Pee-wee's Big Adventure (1985) with friend and fellow Groundling Paul Reubens (as his Pee-wee Herman character), and Allan Quatermain and the Lost City of Gold (1985) starring Richard Chamberlain and Sharon Stone.

In September 2010 Elvira's Movie Macabre returned to television syndication in the United States, this time with public domain films.

In 1985 Elvira began hosting a home video series called ThrillerVideo for International Video Entertainment (I.V.E.). Many of these films were hand-selected by Peterson. Choosing to stay away from the more explicit zombie, cannibal, and slasher films of the time, these were generally tamer films such as The Monster Club and Dan Curtis TV films, as well as many episodes of the Hammer House of Horror TV series. She refused to host Make Them Die Slowly, Seven Doors of Death, and Buried Alive, so the videos were released on the LIVE Home Video label without Elvira's appearance as hostess. After this, several extended episodes[11] of the British namesake series Thriller (i.e. The Devil's Web, A Killer in Every Corner, Murder Motel) were also released without Elvira hosting, sometimes various releases for example, Buried Alive, the cast replaces Elvira.

The success of the Thriller video series led to a second video set, Elvira's Midnight Madness through Rhino Home Video.

In 2004 she revisited this concept with a similar horror film collection on DVD, titled Elvira's Box of Horrors. After more than ten years Box of Horrors was the return of Elvira hosting horror movies as she did with Movie Macabre.

Elvira appeared in comic books from three publishers, DC Comics, Eclipse Comics and Claypool Comics. The Claypool series was co-branded with and distributed by Eclipse, and, after Eclipse ceased publication, was a sole product of Claypool. The series was edited and occasionally written by Richard Howell, featured photographic covers with interior stories and art by Kurt Busiek, Dan Spiegle, Jim Mooney, Steve Leialoha, and others. It ran for 166 issues, plus two trade paperback collections

In the late 1980s and early 1990s a number of Elvira-themed computer games were produced.[12] Some of these were Elvira: Mistress of the Dark, Elvira 2: The Jaws of Cerberus and Elvira: The Arcade Game.

Two Elvira-themed pinball machines were produced by Bally/Midway: Elvira and the Party Monsters[13] was released in 1989, and Scared Stiff[14] was published in 1996.

In the early 1990s Peterson began a series of successful Elvira calendars with her striking, provocative, and campy poses in various macabre settings. One of the months can be seen in the video game, Blood, hanging on various walls.

Elvira recorded several songs for her Halloween albums in the 1980s and 1990s. Here is her discography:

Elvira also performed guest vocals on a track called "Zombie Killer" for the band Leslie and the Ly's, released in February 2008. The music video for the track features Leslie & The Ly's performing to a sold out audience of zombies in a fictional venue called "Elvira Stadium." A 7" single was released.

On Halloween night of 1992 Elvira appeared with rock band, U2, when they played at Dodger Stadium in Los Angeles on their ZOO TV tour. Just as she apparently did some 14 years later, she declared her candidacy for President, noting that "we already have two boobs in the White House, might as well be mine." Following a couple of corny jokes, she led the crowd to sing "Happy Birthday" to drummer, Larry Mullen, Jr., whose birthday is on Halloween.

She appeared on Cartoon Network's talk show, Space Ghost Coast to Coast, in its twenty-ninth episode "Switcheroo" with Susan Olsen.

From 1995-1997 Peterson made appearances as Elvira at the Disney-MGM Studios Theme Park for "Elvira's Friday the 13th" events held whenever the 13th of a month fell on a Friday.

In the mid-1990s Cassandra Peterson enlisted male impersonators, Christian Greenia (Cassandra Fever), from Los Angeles, California, and Patterson Lundquist ("Elvira's Twin"), from Atlanta, Georgia, as her "official Elvira impersonators", calling them "the best she'd ever seen." The two later appeared with her as co-judges on The Search for the Next Elvira.[19] The first official female Elvira impersonator, April Wahlin, the winner of The Search for the Next Elvira, was passed the crown on October 31, 2007, as the winner of the reality show, and made a few appearances during her one-year "reign" from October 31, 2007, to October 31, 2008. Despite Wahlin's win of the title and one-year contract as Elvira, both Greenia and Lundquist continue to appear as Elvira for various events across the country.