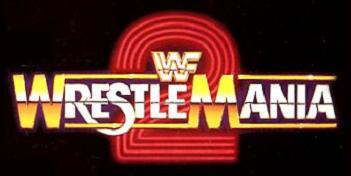 tagline=What The World Has Come To
promotion=World Wrestling Federation
date=April 7, 1986

WrestleMania 2 was the second annual event produced by the World Wrestling Federation (although the first WrestleMania was only on pay-per-view in select areas). It took place on April 7, 1986 at three venues:

*The in
*The Rosemont Horizon in
*The in

Each venue had one main event match with a large undercard. As with the first WrestleMania, the matches were shown on across . This was the first WrestleMania to use cardinal numbers (Arabic numerals). The commentating teams consisted of and in New York, , , and in Chicago and , Lord Alfred Hayes, and Elvira in Los Angeles. The ring announcers were (New York), (Chicago), and Lee Marshall (Los Angeles).

The at was a boxing match where defeated by disqualification. Matches on the were versus for the WWF Intercontinental Championship, versus George Wells and versus The Magnificent Don Muraco.

The at was a WWF Championship match where defeated in a steel cage match to retain the title.

The main feud heading into WrestleMania 2 was between and , with the two battling over the WWF Championship. They had their first encounter on November 2, 1985 edition of "Saturday Night's Main Event" where Hogan teamed up with against André's rivals Bundy and . Hogan and André won the match. [cite web|url=http://www.wwe.com/shows/snme/history/1985to1992/nov021985/|title=Saturday Night's Main Event results - November 2, 1985|publisher=WWE|accessdate=2008-05-25] On March 1, 1986 edition of "Saturday Night's Main Event", Hogan defended his WWF title against The Magnificent Don Muraco. During the match, Bundy interfered and assaulted Hogan. Bundy and Muraco both men assaulted him and broke his ribs.

The second feud heading into the event was between and . Piper established himself as the top heel in WWF in 1985 and joined and Cowboy Bob Orton to feud with and Mr. T. [cite web|first=John|last=Milner|date=|url=http://slam.canoe.ca/Slam/Wrestling/Bios/piper.html|publisher=SLAM! Wrestling|accessdate=2008-05-26] Hogan and T defeated Piper and Orndorff in the main event of the first-ever WrestleMania. [cite web|url=http://www.wwe.com/shows/wrestlemania/history/wm1/mainevent1/|title="Mr. Wonderful" Paul Orndorff & "Rowdy" Roddy Piper w/ Cowboy Bob Orton vs. Hulk Hogan & Mr. T w/ "Superfly" Jimmy Snuka|publisher=WWE|accessdate=2008-05-26] Mr. T and Piper restarted their feud in early 1986 after Piper and T's real-life hatred for each other. WWF turned it into their feud with each other. Piper and other wrestlers hated T because he was an actor and because of his unskilled wrestling ability. T became a special WWF boxer and began a streak of boxing matches. He defeated Bob Orton on March 1, 1986 edition of "Saturday Night's Main Event" in a boxing match. After the match, Piper distracted T allowing Orton to attack T from behind. Piper and Orton began assaulting him, which would culminate in a boxing match at WrestleMania between Piper and T.

The third main feud heading into WrestleMania was between Dream Team ( and Brutus Beefcake) and ( and ) over the WWF Tag Team Championship. On August 24, 1985, they won the tag titles from ( and Mike Rotundo). [cite web|url=http://www.wwe.com/inside/titlehistory/worldtagteam/3044541321232|title=Dream Team's first World Tag Team Championship reign|publisher=WWE|accessdate=2008-05-26] Immediately after their title win, they were challenged by British Bulldogs for the titles. They retained their titles against Bulldogs at a on September 11 by getting disqualified. [cite web|url=http://www.angelfire.com/wrestling/cawthon777/85.htm|title=WWF Show Results 1985|work=Angelfire|accessdate=2008-05-26] They defended the titles against Bulldogs again on March 1, 1986 edition of "Saturday Night's Main Event", where they emerged victorious against Bulldogs. After Bulldogs failed in winning the titles twice, Dream Team agreed to defend their titles against Bulldogs for a final time with a title match set on WrestleMania.

WrestleMania 2 emanated from three arenas. The show began at in . In the first match of the show and the arena, faced The Magnificient Don Muarco. Both men fought to a double countout. Next was a WWF Intercontinental Championship match between and . Savage was seconded by his real-life . He pinned Steele with a roll-up and put his both feet on the ropes for leverage. As a result, Savage retained the Intercontinental title. The third match from the Coliseum was between and George Wells. He hit a DDT on Wells and pinned him to win the match. After the match, Roberts allowed his snake Damian to slither over Wells. The first of WrestleMania 2 was a boxing match between and . T was seconded by real life boxer . Piper was disqualified for bodyslamming T at 1:15 in the 4th round.

WrestleMania 2 next took place from Rosemont Horizon in . The first match was a WWF Women's Championship match between and Velvet McIntyre. McIntyre hit a splash on Moolah but Moolah sidestepped and McIntyre missed the move. Moolah took advantage and pinned McIntyre to retain her title. The second match was a flag match between Corporal Kirschner and . Volkoff was seconded by Classy Freddie Blassie. Blassie threw his cane on Volkoff but Kirschner caught it and hit Volkoff with it and then successfully pinned Volkoff for the victory. The third match was a World Wrestling Federation (WWF) versus (NFL) battle royal. It featured 20 men including the WWF wrestlers and NFL superstars. In the end of the match, and ( and ) were the final participants. André first eliminated Neidhart and then Hart to win the battle royal. The second of WrestleMania was a WWF Tag Team Championship match between ( and ) and Dream Team ( and Brutus Beefcake). Bulldogs were seconded by lead singer and Captain . Smith pushed Valentine into the corner where Valentine knocked heads with Dynamite Kid. Kid fell to the floor while Smith pinned Valentine to win the tag titles and end Dream Team's seven month reign.

The third arena was in . faced Hercules in the first match from Los Angeles. Hercules tried to hit a flying bodypress but missed it. Steamboat followed by hitting a flying bodypress of his own for a successful pinfall victory. , seconded by defeated Uncle Elmer after a diving headbutt. Terry and Hoss Funk faced and in a tag team match. Funk brothers were seconded by Jimmy Hart. The referee was distracted by Hoss. Hart took advantage and gave his microphone to Terry who hit it on JYD and then pinned him to get the win. Next was a WWF Championship steel cage match which was the third and final of WrestleMania 2. It was the only steel cage in WrestleMania history. defended his title against . Hogan's ribs were heavily taped due to an assault by Bundy on March 1, 1986 edition of "Saturday Night's Main Event". Bundy was seconded by . In the beginning, Bundy removed the tape from Hogan's ribs. However, Hogan fought back and rammed Bundy's head into the steel cage. He tried to hit a scoop slam on Bundy but missed it. Bundy hit an avalanche and a big splash on Hogan. However, Hogan did his "hulk up" no sell and hit a scoop slam on Bundy followed by a . He climbed the steel cage but Bundy caught his legs. Hogan kicked Bundy and climbed over the top of the steel cage and climbed on the floor to win the match and retain the title.

* sang a rendition of "" before the show.

*According to [http://www.wwe.com/shows/wrestlemania/history/wm2/factsstats/ WWE.com] , this was indeed the first WrestleMania to be shown on .

*Celebrity guests in attendance for the New York portion of WrestleMania 2 included , , , , , , , , and [ [http://www.wrestlecrap.com/oldinductions.html WrestleMania 2: Horrible crap eminating from three - count 'em THREE - venues! Plus more Susan St. James than you can shake an "UH OH" at!] ] .

*Celebrity guests in attendance for the Chicago portion of WrestleMania 2 included , , Ed Jones, , , , , , , William Perry, and .

*Celebrity guests in attendance for the Los Angeles portion of WrestleMania 2 included , , , and Elvira.

*WrestleMania 2 is the first and only to have taken place on a Monday.

*This was the only WrestleMania to feature a traditional "Cage Match." At Wrestlemania XV, The Undertaker defeated The Big Bossman in a "Hell in a Cell" match.