Orton started wrestling in 1972 in the Florida and Georgia territories, sometimes performing under a mask and using the name "Young Mr. Wrestling". He often teamed with his father, Bob Orton. He made a name for himself in the early to mid-1980s in the National Wrestling Alliance, where he formed a tag team with Don Kernodle and won the NWA World Tag Team Championship. Orton was also involved in an angle where he and Dick Slater accepted a $25,000 offer by then NWA World Champion Harley Race to end the career of Ric Flair in 1983. Orton, Slater, and Race attacked Flair and delivered a spike piledriver, "injuring" Flair's neck. Flair subsequently "retired" then returned and assaulted Slater and Orton with a baseball bat.

Prior to his early 1980s run in the NWA, Orton competed in the World Wrestling Federation. Competing as a heel, he challenged Bob Backlund for the WWF Heavyweight Championship, but was unsuccessful.

Orton re-joined the WWF in 1984 for what would be the most famous run of his career. He was often addressed as "Ace" Orton by Roddy Piper, and was Piper's bodyguard. His other gimmick, wearing a cast during his matches, stemmed from legitimately having his left forearm broken in a match with Jimmy Snuka at the 1985 event The War to Settle the Score in Madison Square Garden. Although the injury healed in real life, the "cast" gimmick involved Orton—on "doctor's orders" -- continuing to wear the cast, claiming the injury had not healed; Orton instead would use the cast to his advantage, striking his opponents behind the referee's back.

Orton was involved in the main event of the very first WrestleMania at Madison Square Garden in 1985, being in the corner of Piper and 'Mr. Wonderful' Paul Orndorff in their match against Hulk Hogan and Mr. T. Orton accidentally cost his team the match after an attempted cheat backfired, resulting in him hitting Orndorff with the cast. Orton also competed in the main event against WWF Champion Hulk Hogan on the premiere episode of Saturday Night's Main Event on NBC broadcast May 11, 1985, which he lost by disqualification due to the interference of Piper.

Orton remained with Piper for the remainder of 1985, feuding with Orndorff and a variety of partners, such as Hogan, André the Giant, and Bruno Sammartino. In early 1986, Orndorff began wearing a cast as a neutralizer and the WWF ordered both men to remove the cast. Also in late 1985 and early 1986, Orton challenged Hogan for the WWF Heavyweight Championship; like his matches four years earlier against Backlund, Orton was not successful.

Orton was dubbed "Boxing" Bob and "Battling" Bob in early 1986 after the cast came off and fought Mr. T at Saturday Night's Main Event, which served as a setup for the Piper-Mr. T match at WrestleMania 2. At WrestleMania Orton was introduced as "Ace in Comedy and Funnyman" by guest ring announcer Joan Rivers who misread the card.

Piper and Orton went their separate ways after WrestleMania, with Piper taking a hiatus and Orton in the meantime becoming the bodyguard for Piper's talk-segment successor Adorable Adrian Adonis; Adonis had Orton wear a pink cowboy hat. When Piper returned later in 1986 to reclaim his talk show segment (turning face in the process), Orton betrayed his long-time friend, sparking a violent feud that typically saw Piper winning. During this time, Orton formed a tag team with The Magnificent Muraco, with the duo managed by Mr. Fuji. They won several matches and appeared at WrestleMania III, losing to the Can-Am Connection.

During the summer of 1987, Muraco and Orton began arguing during several of their matches, eventually with the two turning on each other. Orton continued to be billed as the heel while Muraco (adopting the nickname "The Rock") turned face. The two wrestlers feuded with each other during the late summer and early fall, after which Orton left the WWF. 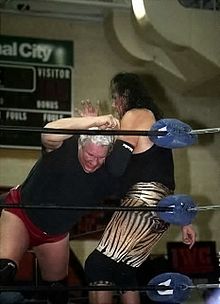 Orton in a match against Jimmy Snuka in 2009.

After leaving the WWF, Orton resurfaced in the American Wrestling Association (AWA) in 1988. He returned to the NWA briefly in 1989, losing to Dick Murdoch at the 1989 WrestleWar in a bullrope match. In 1991 he wrestled for Herb Abrams' Universal Wrestling Federation at their lone pay-per-view Beach Brawl as well as their live wrestling special Blackjack Brawl. In 1994 he made a few appearances for Jim Cornette's Smoky Mountain Wrestling. In 1996 he feuded with Tito Santana in the short lived American Wrestling Federation. He had a brief feud in 1997 against "Sexy" Ace Steele in MVWA in St. Louis. He retired from full-time active competition in 1999, but has continued to wrestle on a semi-regular basis.

On August 9, 2008, Orton performed in South Bend, Indiana, along with Greg "The Hammer" Valentine.

Orton currently works as a performer and co-owner of Tennessee Mountain Wrestling in Knoxville, Tennessee.

On October 17, 2009, Orton (accompanied by his youngest son Nathan) performed at Independent Hardcore Wrestling against "Bloody" Harker Dirge, in a match for the Pro Wrestling Entertainment championship, losing by disqualification after Nathan attacked Dirge. This occasion marked Nathan Orton's first appearance in a professional wrestling event.

On August 21, 2005, at SummerSlam, Orton interfered in a rematch between Randy and The Undertaker, this time enabling his son to defeat The Undertaker. Orton then began accompanying Randy to ringside during his matches, and teamed with his son at No Mercy on October 9, 2005, defeating The Undertaker in a handicap casket match. The Ortons teamed together once again on the October 28, 2005 episode of SmackDown!, joining forces with Ken Kennedy to face Roddy Piper, Batista, and Eddie Guerrero in a six man tag team match. The match ended in defeat for the Ortons when Orton succumbed to Piper's sleeper hold.

On the December 16, 2005 episode of SmackDown!, Orton disguised himself as one of the Undertaker's druids and carried The Undertaker's signature urn to ringside as The Undertaker came to the ring to confront Randy. Orton remained at ringside after the other druids had left, distracting The Undertaker and enabling Randy to attack him. Orton then handed Randy the urn, which Randy used to knock The Undertaker unconscious.

At Armageddon, Orton (still holding the urn) accompanied Randy to ringside for his Hell in a Cell match with The Undertaker. He interfered in the match several times, but was ultimately unable to prevent The Undertaker from delivering a Tombstone Piledriver to both Ortons and then covering Randy for the win.

Orton made an appearance on the November 15, 2010 episode of WWE Raw as the show went old school, with appearances from past WWE wrestlers, announcers and other on-air personalities.

Orton is married to Elaine Orton, a nurse at Christian Hospital NE in Missouri, and they have three children: sons, Randy (also a professional wrestler) and Nathan (a mixed-martial arts fighter), and a daughter, Becky. Orton also has several grandchildren, who are the offspring of son Randy Orton and his wife, and daughter Becky Orton and her husband. He now lives in Florissant, Missouri. Bob Orton and Curt Hennig were very close friends.

On an episode of WWE Confidential, he admitted that his forearm injury in the 1985 match with Jimmy Snuka was not a work, and did not heal when he wore the cast. It wouldn't heal fully until he left the WWF in 1987.

Orton appears as an unlockable legend in WWE Smackdown vs Raw 2010.