Concubinage is the state of a woman or man in an ongoing, usually matrimonially oriented, relationship with somebody to whom they cannot be married, often because of a difference in social status or economic condition. 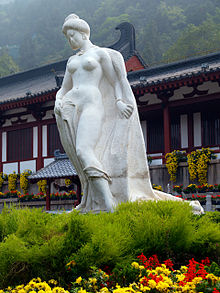 Statue of Yang Guifei (719-756), the favoured concubine of Emperor Tang Xuanzong of China.

A concubine is generally a woman in an ongoing, marriage-like relationship with a man whom she cannot marry for a specific reason. It may be because she is of lower social rank than the man (including slave status) or because the man is already married. Generally, only men of high economic and social status have concubines. Many historical rulers maintained concubines as well as wives.

Historically, concubinage was frequently voluntary (by the woman and/or her family's arrangement), as it provided a measure of economic security for the woman involved.

Under Roman law, Roman culture under the Empire came to tolerate concubinage so long as the relation was durable and exclusive; for the jurists, concubinage was an honourable de facto situation.[1]

When having no legal status but being recognized, or defined in law, as in ancient China, concubinage was akin, although inferior, to marriage. The children of a concubine were recognized as legal offspring of the father; their inheritance rights may have been inferior to younger children of a marriage, or they may have received a smaller inheritance. Men frequently used concubines to bear heirs when he and his wife were unable to produce sons.

In distinction to such systems, modern Western laws do not acknowledge the legal status of concubines, and recognize only monogamous marriages. Any other relationship does not enjoy legal protection, making the woman essentially a mistress.

In Ancient Greece, the practice of keeping a slave concubine (Greek "pallakis") was little recorded but appears throughout Athenian history.[2] A Draconian law prescribed that a man could kill another man caught with his concubine for the production of free children (thereby implying that concubines' children were not granted citizenship).[2] While references to the sexual exploitation of maidservants appear in literature, it was considered disgraceful for a man to keep such women under the same roof as his wife.[3] Some interpretations of hetaera have held they were concubines when one had a permanent relationship with a single man.[4]

For more details on this topic, see Marriage in ancient Rome#Concubinage.

Concubinage was an institution practiced in ancient Rome that allowed a man to enter into an informal but recognized relationship with a woman (concubina, plural concubinae) not his wife, most often a woman whose lower social status was an obstacle to marriage. Concubinage was "tolerated to the degree that it did not threaten the religious and legal integrity of the family".[5] It was not considered derogatory to be called a concubina, as the title was often inscribed on tombstones.[6]

A concubinus was a young male slave chosen by his master as a sexual partner. Romans did not mark same-sex relations as "homosexual" if an adult male used a slave or prostitute, characteristically a youth, as his passive partner (see Homosexuality in ancient Rome); these relations, however, were expected to play a secondary role to marriage, within which institution an adult male demonstrated his masculine authority as head of household (paterfamilias). In one of his wedding poems, Catullus (fl. mid-1st century BC) assumes that the young bridegroom has a concubinus who considers himself elevated above the other slaves, but who will be set aside as his master turns his attention to marriage and family life.[7]

Among the Israelites, men commonly acknowledged their concubines, and such women enjoyed the same rights in the house as legitimate wives.[8] The principal difference in the Bible between a wife and a concubine is that wives had dowries, while concubines did not.

The concubine commanded the same respect and inviolability as the wife. The man to whom she belonged was dishonoured if other men lay hands on her.[8] For instance, David is portrayed as having been dishonoured when his concubines had a sexual relationship with his son Absalom.[9] However, this instance is as likely dishonoring to David because it involves a form of incest.[10] Although the word used in the Levitical ban is commonly translated "wife," on at least one other occasion it is used to refer a woman who is not a wife - specifically, the handmaid of Jacob's wife.[11]

Since it was regarded as the highest blessing to have many children, legitimate wives often gave their maids to their husbands to atone, at least in part, if they were barren, as in the cases of Sarah and Hagar, Rachel and Bilhah.[8] The children of the concubine had equal rights with those of the legitimate wife;[8] for example, King Abimelech was the son of Gideon and his concubine.[12] Later[8] biblical figures such as Gideon, David, and Solomon had concubines in addition to many childbearing wives. For example, the Books of Kings says that Solomon had 700 wives and 300 concubines.[13]

In Judaism, concubines are referred to by the Hebrew term pilegesh. The term is a non-Hebrew, non-Semitic loanword deriving from the Greek word pallakis, Greek παλλακίς,[14][15][16] meaning a mistress staying in house. Or the Aramaic phrase palga isha, meaning half-wife.[citation needed]

According to the Babylonian Talmud,[17] the difference between a concubine and a full wife was that the latter received a marriage contract (Hebrew:ketubah) and her marriage (nissu'in) was preceded by a formal betrothal (erusin), neither being the case for a concubine. But, one opinion in the Jerusalem Talmud argues that the concubine should also receive a marriage contract, but without including a clause specifying a divorce settlement.[8]

Certain Jewish thinkers, such as Maimonides, believed that concubines are strictly reserved for kings, and thus that a commoner may not have a concubine; indeed, such thinkers argued that commoners may not engage in any type of sexual relations outside of a marriage. Before Maimonides concluded this, Sunni Muslims officially prohibited mutah (i.e. temporary marriage) relationships; some commentators'[who?] suggest that Maimonides changed his view in response to this development, similar to Gershom ben Judah's ban on polygamy being made after Christians had prohibited it.

Maimonides was not the first Jewish thinker to criticise concubinage; for example, it is severely condemned in Leviticus Rabbah.[18] Other Jewish thinkers, such as Nahmanides, Samuel ben Uri Shraga Phoebus, and Jacob Emden, strongly object to the idea that concubines should be forbidden.

In the Hebrew of the contemporary State of Israel, the word pilegesh is often used as the equivalent of the English word mistress - i.e. the female partner in extramarital relations, even when these relations have no legal recognition. There are attempts to popularise pilegesh as a form of premarital, non-marital and extramarital relationships which (in their view) would be permitted by Jewish religious law.[19][20][21] 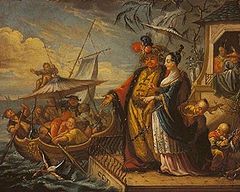 In Ancient China, successful men often supported several concubines – Chinese Emperors kept thousands.[22] A concubine's treatment and situation was highly variable according to the social status of the male with whom she was engaged, as well as the attitude of the wife; the position of the concubine was generally inferior to that of the wife. Though a concubine could produce heirs, her children would be inferior in status to legitimate children. Concubines were allegedly, on occasion, buried alive with their masters to "keep them company in the afterlife."[22]

Despite the limitations imposed on ancient Chinese concubines, history and literature have examples of concubines achieving great power and influence. For example, in one of the Four Great Classical Novels of China, The Dream of the Red Chamber (believed to be a semi-autobiographical account of author Cao Xueqin's own family life), three generations of the Jia family are supported by one favorite concubine of the Emperor.

Imperial concubines, kept by Emperors in the Forbidden City, were traditionally guarded by eunuchs to ensure that they could not be impregnated by anyone but the Emperor.[22] Lady Yehenara, otherwise known as Dowager Empress Cixi, was arguably one of the most successful concubines in China’s history. Cixi first entered the court as a concubine to the Xianfeng Emperor and gave birth to an illegitimate male heir, who would become the Tongzhi Emperor. The Emperor passed over many legitimate male heirs and named Cixi's son the Crown Prince. She would eventually become the de facto ruler of the Manchu Qing Dynasty in China for 47 years after her son's death.[23]

In Siam (today Thailand), men were permitted to have multiple wives, whom they could sell, as well as their children. The principal wife could only be divorced. If her husband died, she inherited the property rights to the secondary wives.[24]

Concubinage in the view of Islamic theology

According to all the casts of Islam, concubinage is seen as a sin and criticized as prostitution. But in Islam, men are allowed to marry more than one but not more than four women at one time and if they want to marry again, they have to divorce one of their existing wives. Also, before marrying more than one wife, they must have a good economic condition and known how to be fair to their wives and provide for them equally.

When slavery became institutionalized in the North American colonies, white men, whether or not they were married, sometimes took enslaved women as concubines. Marriage between the races was prohibited by law in the colonies and the later United States. Many colonies and states also had laws against miscegenation, or any interracial relations, but the latter were generally ignored by white men. From 1662 the Colony of Virginia, followed by others, incorporated into law that the children took their mother's status, by the principle of partus sequitur ventrem; all children born to enslaved mothers were born into slavery, regardless of their father's status or ancestry.[25] This led to generations of mixed-race slaves, some who were otherwise considered legally white (1/8 or less African, equivalent to a great-grandparent) before the American Civil War.

In some cases, men might have long-term relationships with enslaved women, giving them and their mixed-race children freedom and providing their children with apprenticeships, education and transfer of capital. In other cases, they might do nothing for them except in a minor way. Such arrangements were more prevalent in the South during the antebellum years.

Historians now widely believe that the widower Thomas Jefferson, both before and during his presidency of the United States in the early 19th century, had an intimate relationship of 38 years with his mixed-race slave Sally Hemings, in such an arrangement.[26] He freed all four of her surviving children as they came of age; the Hemings were the only slave family to go free from Monticello. The children were 7/8 European in ancestry and legally white. Three entered the white community as adults. A 1998 DNA study showed a match between the Jefferson male line and a male descendant of Sally Hemings.[26]

In Louisiana and former French territories, a formalized system of concubinage called placage developed. European men took enslaved or free women of color as mistresses after making arrangements to give them a dowry, house or other transfer of property, and sometimes, if they were enslaved, offering freedom and education for their children.[27] A third class of free people of color developed, especially in New Orleans.[27][28] Many became educated, artisans and property owners. French-speaking and practicing Catholics, who combined French and African-American culture, created an elite between the whites of European descent and the masses of slaves.[27] Today descendants of the free people of color are generally called Louisiana Creole people.[27]